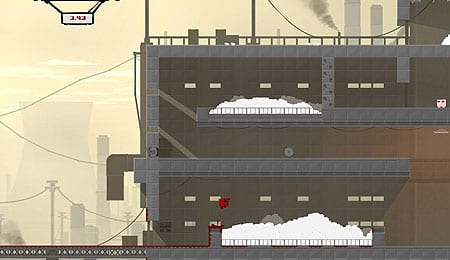 I received my review code for Super Meat Boy last Wednesday. Had I started a swear jar that afternoon and placed a shiny nickel in there for each “F bomb” I dropped as my tiny cube of meat failed to complete a puzzle by the narrowest of margins, I’d be flat broke! And yet, my inner masochist kept returning for more — about the only thing missing was developer Team Meat decked out in ceremonial robes alternating turns with a paddle while I cried out, “Thank you, sirs, may I have another?”

You’ve only got two buttons (run and jump) at your disposal, though the jump command is pressure sensitive. Tap it and you’ll do a quick hop, push it down and you’ll leap higher. Once again, however, the Xbox 360’s d-pad is inadequate for the challenge level. Using the analog stick is more responsive, but I still felt there were plenty of times when my jumps didn’t match the direction I was pressing. It’s pretty annoying in a title that demands precision, but the levels are so short it rarely undoes more than a few seconds worth of progress.

There isn’t much eye candy to ogle in Super Meat Boy, which forgoes any semblance of modern gaming to pay homage to classic titles of a bygone era. It’s presented well, and the cutesy characters (Meat Boy, Bandage Girl and Dr. Fetus) help to lighten the mood despite the ever increasing challenges. Hidden warps push the envelope even further into the past, presenting levels that look like they were ripped straight from an NES emulator.

The audio design is surprisingly good with a fun soundtrack that never grates on you no matter how many dozens of times you’ve expired in the past 15 minutes. Sound effects are sparse, but you’ll learn to simultaneously love and hate the splat Meat Boy makes when he’s eviscerated.

On the surface, a game comprised of hundreds of levels that rarely span longer than 30 seconds may sound like casual fare, but the reality of Super Meat Boy couldn’t be further from that. This game is all about pushing your platforming skills to the limit, and then doing it all over again. It’s trial-and-error gaming at its most basic with every nudge, fall or miscalculation resulting in instantaneous death and an immediate respawn back at the start.

It may seem intimidating, but where Super Meat Boy absolutely excels is in bringing your abilities along slowly — to use a 1980s movie analogy, Team Meat is Mr. Miyagi, and you’re Daniel LaRusso. You don’t even realize just how much you’ve learned along the way until you go back and replay earlier levels. Suddenly you’ll find that those pesky saws that gave you such trouble the first time around are now circumvented with little effort. The game is teaching you how to beat it. Wax on, wax off.

Super Meat Boy also does an excellent job in continually adding new devices to keep things fresh. Early on it’ll be pretty straight forward with timed jumps and stationary saws providing the lone obstacles between you and your goal. Then the saws start to move, and then fans propel you through the air. By the time you reach the end of your journey you’ll have bested dozens of unique traps with plenty of mixing and matching to keep you on your toes.

Not surprisingly, though, with so many different challenges thrown your way, some of them don’t measure up as well as others. I didn’t care for the items that propelled you through the air (fans, gravity orbs) as they seemed a bit too temperamental for their own good. Conversely, I thought the handful of levels that made use of portals were among the game’s best. Others will undoubtedly have their own favourites, but I doubt most will find everything to their liking.

There’s also this little item: this game is designed to kill you…repeatedly. Many levels require multiple deaths just to get a read on the layout, much less actually clearing it. I racked up well over 1,000 deaths getting to the end and wasn’t close to unlocking everything. And there is a lot of content here. Each level has a “dark” (read: more difficult) alternative, which can be only be accessed by finishing under the target time — no easy task the further you progress. There are also band-aids to be found and hidden warps that present completely different challenges in decidedly 8-bit settings.

Collect enough band-aids and/or successfully complete the warps and you’ll unlock the stars of other independent games such as Tim from Braid and the creature from Alien Hominid for use within Super Meat Boy. Each character has a unique ability, like executing a second jump in mid-air, and with the exception of boss fights and warp zones, they can be swapped in and out at will. That serves to not only give you options as you progress, but also more reasons to play through levels again.

Few games have elicited the depth of the love/hate relationship I possess with Super Meat Boy. One minute I’m cursing the developers’ names and vowing to never play again, and then the next I’m in a state of pure bliss after conquering a devilishly tough level. The challenge level is high, but those with the patience and perseverance to see it to the end will be treated to a rollercoaster ride through one of this year’s more memorable efforts.

By Herija Green
This entry was posted on Tuesday, October 19th, 2010 at 12:40 pm and is filed under Herija Green, Video Game Reviews. You can follow any responses to this entry through the RSS 2.0 feed. You can leave a response, or trackback from your own site.