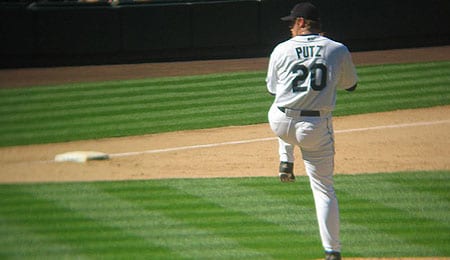 J.J. Putz’s injury is just one of the calamities to hit the closer ranks recently.

This week on The FantasyPros911 Show on Blogtalkradio, Rich Wilson and I welcomed back the eloquent vocal stylings of Gabriel Lundeen from the deep south. Tony Cincotta was taking the evening off and is rumoured to be still riding a rickshaw through the streets of New York City in search of his rental car. Good fortunes, Tony! This week, we spent the first half of the show covering the news of the day and devoted the second half to our mid-season awards and some fearless predictions for the second half of the 2011 campaign. We broke all the rules, again… and stretched the usual format into a 90-minute extravaganza for your listening pleasure.

After several weeks of relative stability in the ninth inning, last week was a chaotic one at best for the closer rank. J.J. Putz and Ryan Madson both hit the DL with injuries; Jordan Walden has been having a rough go of it lately; Matt Capps, after his memorable meltdown Saturday, was removed from a save opportunity after just one out Sunday; Mark Melancon continues to struggle for the ‘Stros, walking in the winning run against the BoSox Sunday; as we near the mid-point in the season, questions continue to crop up about whether the Mets are going to be moving Francisco Rodriguez and in light of this uncertainty, is Bobby Parnell a reliever we should be considering as a pickup?

The Chicago White Sox, Kansas City Royals, and even the mighty New York Yankees are all either working with or pondering moving towards the six-man rotation. Somehow I just knew that bringing up the fact that this is standard fare in Japan wasn’t going to be a successful approach with my co-hosts.

Several pitchers occupied our next segment. Rich Harden has finally made his 2011 debut and we took a few minutes to discuss the oft-injured righty’s future in Oakland. Chris Carpenter — after a very rocky start to the 2011 campaign — appears to have turned a corner lately. Does this trend continue heading into the second half?

Moving forward, it was time to hand out some of the mid-season hardware. The San Diego Padres Award for the team coming out of nowhere to surprise was narrowed down to the Indians, Pirates, and Diamondbacks. The Jose Bautista Award for the player coming out of nowhere to excel (and yes, they actually had to generate positive stats, so Yunesky Maya didn’t make the cut) generated a very interesting discussion with some great choices being tabled. We then took a look at our MVPs for both the positional players and pitcher. The bats have to be led by Jose Reyes, Matt Kemp, and Ryan Braun — all three being very deserving candidates. The first half busts were then reviewed and in a very rare occurrence all three of us agreed that Adam Dunn is in a league of his own in this category.

Next up came some second half prognosticating and how could the future of both Reyes and Heath Bell not enter into the discussion? Who is the next closer to lose his job and who will replace him? Who are the best buy low and sell high candidates as we reach the mid-point of the 2011 season? Finally we got out our crystal balls and sorted through the contenders and pretenders in an effort to predict the division winners and Wild Card candidates.

As always a fun time was had by all and the full show can be reviewed by clicking on the play button below.

By Tim McLeod
This entry was posted on Monday, July 4th, 2011 at 10:37 am and is filed under BASEBALL, Podcast, Tim McLeod. You can follow any responses to this entry through the RSS 2.0 feed. You can skip to the end and leave a response. Pinging is currently not allowed.