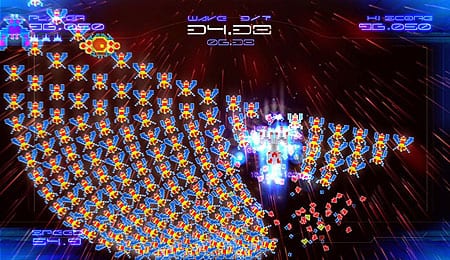 It may look overwhelming, but it’s actually great fun.

As I’ve undoubtedly mentioned in previous reviews, Galaga rates as one of my favourite old-school arcade titles. That, combined with the awesomeness that was Pac-Man Championship Edition DX (the first title in a series of remakes entitled Namco Generations), had me primed for Namco Bandai’s latest downloadable release, Galaga Legions DX. So does the retro reboot do the original justice? Yes… and then some.

Galaga Legions DX is essentially a twin-stick shooter. You fly around with the left stick and fire with the right — the triggers can also be used, but I can’t imagine why anyone would take the unnecessary step of doing so since the right stick is aiming anyway. Beyond that, the bumpers switch between your ship’s two forms. One has your satellite lasers in tight so that all weapons fire on the same target, while the other splits them apart, allowing you to fire in up to three directions simultaneously.

Brightly coloured ships against sparsely-populated deep space backgrounds dominate Galaga Legions DX, which makes for a sharp-looking “updated original” vibe. Massive amounts of ships, laser fire and explosions routinely fill the screen in this fast-paced title, but the frame rate is equal to the task at all times. As in Pac-Man CE DX, you’ll also have access to several different filters that change the game’s appearance — one of which brings back the various ships from the 1981 version.

There’s not a ton of variety in the up-tempo soundtracks, and the game’s pacing/gameplay doesn’t allow for a lot of integration of the classic sound effects, which is disappointing. What’s present isn’t bad by any means; I just missed hearing the tractor beam spring into action or the dive sound of bees bringing the pain from above.

As you might imagine, Galaga Legions DX is based more on Galaga Legions than the arcade classic, but those that found the last iteration overly difficult (to grasp and/or complete) should enjoy the changes that have been made in the Namco Generations version. For starters, Galaga Legions DX has switched its format to feature timed stages.

This means you’ll have a set amount of time (usually between 60 and 90 seconds) to clear all the waves each stage has to offer. The game boasts a total of nine areas, which contain five stages a piece. The first four stages challenge you to wipe out massive numbers of enemies as quickly as possible. Then, all of your remaining time carries forward to the fifth stage, which acts as a bonus level. Here point multipliers are increased, and you’re given a group of captured vessels to increase your firepower.

It’s an interesting reimagining of the gameplay found in Galaga Legions, and it immediately makes for a more accessible and addictive title. Memorizing attack patterns and finding the best way to shave precious seconds off your time provides good replay incentive, and the game never makes you feel like you’re failing to put together a solid run… at least until your leaderboard rank pops up. Plus, like Pac-Man CE DX, the game slows the action down when you’re in danger of being crashed into or hit by a projectile, which keeps the frustration level low.

Another change has the satellite lasers — introduced in the last game as deployable cannons that you could set up at various points on the screen — now attached to your vessel. As noted in the controls section, they can be adjusted to fire in harmony with your main gun or independently. Not having to position the satellites is one less thing to worry about and allows you to focus on your primary vessel, which is a good thing.

In terms of actual gameplay, the upcoming attack wave’s flight path will be drawn out on the screen, and then their spawn point(s) will appear. From there it’s up to you to determine the most effective way to obliterate the massive number of enemies. Most groups will contain either a “bomb ship” or a leader, whose destruction will result in all smaller ships exploding as well. The tradeoff is that setting off these chain reactions awards fewer points than destroying them individually. Still, since it’s more important to save that time for the bonus stages, it’s not much of a deterrent.

As mentioned, Galaga Legions DX contains nine areas with five stages each, which when combined with the Championship mode gives the game 50 in total. Within that there are three different difficulty settings and a time attack mode that challenges you to complete each of the 50 stages under a set time. There are also online leaderboards to compete against, and the game records the top runs and allows anyone to view them to polish up their own skills. It may not sound like a ton in terms of replay value, but the draw to go back and try to up your high score remains a compelling one.

While Galaga Legions DX is a considerably larger departure from its source material than the Pac-Man version, it still keeps the spirit of the original alive while presenting a fast-paced shoot ’em up that rivals Geometry Wars and anything else either Xbox Live Arcade or the PlayStation Network have on offer.

By Herija Green
This entry was posted on Monday, July 4th, 2011 at 1:49 pm and is filed under Herija Green, Video Game Reviews. You can follow any responses to this entry through the RSS 2.0 feed. You can leave a response, or trackback from your own site.