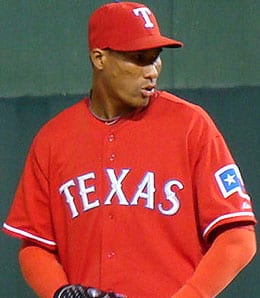 Alexi Ogando’s move from bullpen to rotation has been revelatory.

What is it with the Texas Rangers and their ability to turn relievers into superb starters?

After having amazing success converting C.J. Wilson into a rotation staple last year, the Rangers have proved that lightning can strike twice with the equally – and perhaps even more impressive – transition of Alexi Ogando.

On Friday, Ogando turned in his second straight six-inning, five-hit, one-run outing, only this time the bullpen backed him up en route to his fourth win of the season, leaving the former set-up man undefeated through his first seven starts in the majors.

Blister problems have been an issue so far, but this hasn’t stopped him from putting up some very impressive numbers and making him a must-own Fantasy commodity along the way.

It was still very unclear late in Spring Training exactly what Ogando’s role would be this season, as much of it depended on whether Texas would shift Neftali Feliz into the rotation or keep him as the closer. So while Ogando looked like a real nice sleeper because he had a shot to close if Feliz became a starter, it turns out he’s arguably providing even more value out of the rotation.

We ranked Ogando just outside the top 50 among relief pitchers, but the way he’s taken to starting so far, he’s probably been a top 15 SP through the first six weeks of the season.

In seven starts, he’s surrendered more than one earned run just twice and more than two earned runs only once. Um… that’ll do. His control has been stellar, and while his strikeout rate is predictably down, Ogando’s command has been off the charts. Opponents are batting a mere .185 against him.

The fact that on Friday night he started showcasing his changeup more often suggests that Ogando is making adjustments on the fly – something that will definitely stead him well as teams start to get second and third looks at him.

What’s even more impressive is that this isn’t the first transition Ogando has successfully completed. He was originally an outfield prospect in the A’s organization before morphing into a top-notch reliever. And now he’s among the best starters in the AL – at least so far in 2011.

Sure, I’d be watching him closely as the season progresses to see how the increased workload is affecting him, but for now Ogando has entered must-own and must-start territory, so if you were astute enough to pluck him off the wire early in the season, pat yourself on the back and enjoy the ride.

After spanking a modest six homers as a rookie, Elvis Andrus failed to go yard in what was mostly considered a disappointing sophomore campaign last year. Sure, you weren’t drafting him for his pop, but it would have been nice to see him develop double-digit home run power – a trait that would definitely elevate his Fantasy value.

Heading into the season, we ranked Andrus just outside the top five among shortstops and based on his early play, he’s exceeded those expectations. On Friday, Andrus spanked a pair of hits – including his second dinger of the season – and drove in two runs to key the Rangers’ 4-1 win over the Angels.

The thing that’s most impressed me about Andrus so far this year, however, is his massively improved base stealing prowess. He swiped 33-of-39 as a rook – a tremendous success rate. Last year, however, Andrus was caught 15 times in 47 tries, and that’s a rate that will barely help a team. He’s definitely stepped up in that regard so far in 2011, going a perfect 11-for-11 in thefts, putting him on pace to top 45 steals for the first time.

Combine that with an increase in productivity and a slightly improved BA and you have the makings of an splendid option at a very weak position.

Texas revamped its lineup this week, and as part of the shuffling clean-up hitter Adrian Beltre was shifted down to sixth. Moving Beltre away from the clean-up slot was something the Rangers had mulled early in the year when their new third baseman got off to such a crappy start, but by mid-April he started turning it on, and the idea of moving him faded away.

However, in an effort to shake Texas out of its recent doldrums, the batting order was tinkered with, dropping Beltre down a couple of slots with Michael Young moving into the four hole.

Beltre got the day off Monday, and all he did the next day, in his first game after the demotion, was spank a two-run homer – his first long ball since April 24. Wednesday’s game wound up being postponed, so the Rangers weren’t back in action until Friday, and what did Beltre do? Yup, you guessed it – another homer. Clearly, the move to get his bat going again has worked and you can expect Beltre to move back up in the order, if Young ever cools off that is.

On Saturday, Beltre gets another treat – he gets to face Dan Haren. For most hitters, this would hardly be cause for celebration. Who would want to go up against one of the toughest hurlers in the league? The thing is, Beltre is 19-for-44 and he’s racked up a .750 slugging percentage against Haren. Meatball city, baby! Could Beltre go yard for a third straight game?

By RotoRob
This entry was posted on Saturday, May 14th, 2011 at 12:28 pm and is filed under BASEBALL, MLB Today, RotoRob, Team report. You can follow any responses to this entry through the RSS 2.0 feed. You can leave a response, or trackback from your own site.