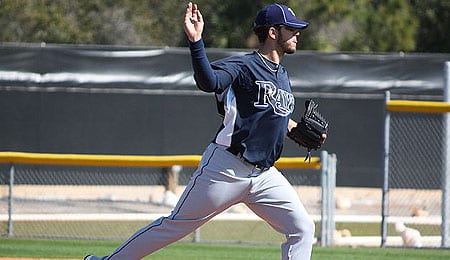 James Shields has been a steal for those that drafted him this spring.

The Baltimore Orioles are fresh off a three-game sweep of the Mariners, but now they have to travel Tampa Bay to face the suddenly first-place Rays, the same team that swept the O’s in B-More last weekend.

On Thursday, Vladimir Guerrero’s modest three-game hitting streak came to an end, but his HBP helped fuel Baltimore’s game-winning two-run rally in the bottom of the 12th. Vlad’s been healthy again so far this season, but you wouldn’t know it from his butt-ugly start. His extra-base pop is at career-worst levels, what little speed he had left is now gone (naturally, he was lifted for a pinch runner in the 12th) and he could easily fail to hit .300 (currently at a career-low .275) for just the second time in his career, but the second time in three years.

Where’s the pop, dude? One homer every 35.5 at-bats? That isn’t going to cut it for Fantasy owners, so it isn’t a great surprise that he’s begun to wind up on the waiver wire in some shallow leagues.

If you drafted Rays starter James Shields this spring, chances are you’re doing pretty well – he’s been one of the best steals of the draft so far this season.

After slipping in 2009 and plummeting even further last year, we barely ranked Shields as a top 60 starting pitcher heading into the season, but he’s been better than ever and is probably among the top half dozen starters in the game right now.

The righty has been a serious workhorse so far, pitching at least seven innings in seven of his eight starts. In fact, Shields is currently on pace to shatter his personal best with 263 2/3 IP. To put that in perspective, Roy Halladay led the majors last year with 250 2/3 IP. You’d have to go back to 2003 (Halladay, 266) to find an instance of a starter throwing more frames than Shields is currently on pace for.

It’s definitely something to monitor as the season progresses, but right now it’s clearly not a problem for the well-built (6’4”, 220) Shields.

Despite scattering seven hits in seven innings Thursday, Shields has been extremely hard to hit, yielding only 45 hits in 60 2/3 IP so far. Hell, he even finally got the bizarre monkey that was the Cleveland Indians off his back with his win Thursday, the first in seven career starts (previously 0-4) against the Tribe. Cleveland was the last AL team that Shields hadn’t beaten. “I got one more on my bucket list,” he quipped.

I really like the fact that his homer rate is way down. After serving up a career-high 34 gopher balls last season, Shields has limited opponents to just five so far this year.

Now the question is whether he can sustain this success. Certainly the improved ground ball rates (near career-best levels) should help stay stingy in the long ball department. But as unlucky as he was last year (career-high .341 BABIP compared to career mark of .304), he’s been even luckier so far in 2011 (.245 BABIP). His strand rates are also higher than usual. You can expect some regression, but clearly James Shields v.2011 is a vastly improved beast. Sell high? Not the worst idea you’ll hear today.

By RotoRob
This entry was posted on Friday, May 13th, 2011 at 10:35 am and is filed under BASEBALL, MLB Today, RotoRob. You can follow any responses to this entry through the RSS 2.0 feed. You can skip to the end and leave a response. Pinging is currently not allowed.