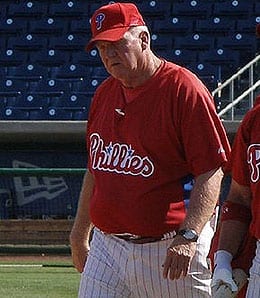 Charlie Manuel’s team has yet to lose two straight this season.

No one doubts Miguel Cabrera’s ability – we ranked him as the second best first baseman in the game heading into the season. The only questions surrounding Miggy have to do with his off-field issues with alcohol and that’s something that could haunt him for the rest of his life (and certainly adds an element of risk when taking him for your Fantasy team).

One thing that is risk-free is Cabrera’s ability to carry your team. On Tuesday, he racked up his third straight multi-hit game, including a walk-off bases-loaded single in the ninth inning to give the Tigers a much-needed win. Yes, Cabrera’s latest DUI charge has yet to be resolved, but he’s picking up right where he left off last year when he was the runner up in the AL MVP race.

Cabrera is punishing opposing pitchers to the tune of a .385 mark, he’s averaging almost an RBI per game and he’s reduced his strikeout rate significantly. He leads the league in slugging and OPS while ranking second in BA and homers. Yes, it’s way early, but those sound like MVP numbers to me. As long as Cabrera remains more clutch than lush for your Fantasy team, you’ll be feeling no pain (so to speak).

After getting dumped in the series opener in Washington Tuesday, what do you think the chances are that Charlie Manuel’s Phillies are going to pound back Wednesday with ace No. 1 Roy Halladay on the mound? A word to the wise: if you have better options in a daily league, sit your Nats for this one, especially given Doc’s domination of Washington over his career (eight straight wins and a 0.39 ERA in three starts last year).

We’ll have to wait another night to see which Chris Tillman will show up for the Orioles against the Yankees after Tuesday night’s affair was lost to rain. Tillman was brilliant in his first start of the season against the Rays, tossing six no-hit innings (of course, that was back before the Rays remembered how to hit once they got a crack at Daisuke Matsuzaka). However, in his second start, he got touched up pretty hard by the Tigers and failed to make it through five innings.

Tillman, who won’t turn 23 until later this week, is a pitcher we identified as a possible post-hype bargain, so don’t sleep on him too long. Obviously, a matchup against the Yankees – especially in Yankee Stadium – isn’t a good testing ground for any pitcher, much less a youngster like Tillman. But I’d keep my eye on him over the next few starts, as I think he’s a decent spot-starter in AL-only leagues already, but could prove useful in other formats as the season progresses.

Jeff Karstens was scheduled to make his first start of the season Tuesday, but the Pirates-Brewers game was washed away, so he’ll have to wait until the weekend before getting a chance to start. And while his numbers as a long reliever so far this year are somewhat enticing (just three hits and no earned runs allowed with five strikeouts in 5 2/3 IP), it’s his occasional bouts of wildness that worry me.

When we last checked in on him (almost two years ago to the day), he was a wild man in his 2009 debut, and definitely suffered from control problems that season (45 walks in 108 IP). In fairness, that wasn’t an issue last year, although his hit rates (.300 BAA) and gopheritits (21 homers allowed) were. NL-only league owners may be looking at Karstens as a possible spot starter, and that could be the best case scenario, but I’d leave him on the wire until he proves he can string together a couple of serviceable starts. For his first start this weekend, he’ll be facing one of the best offenses in the bigs (the Reds), so Karstens shouldn’t be in anyone’s active lineup regardless of the size of their league.

By taking the first two games of their series in Boston, Joe Maddon’s Tampa Bay Rays have climbed out of the AL East cellar and are going for the sweep Wednesday as the agony continues for Red Sox Nation. While the Rays didn’t exactly maintain the offensive explosion they had in the first game (in fact, they only scored in one inning Tuesday), they got a solid pitching performance from David Price, his best start of the season. If the Rays can feast off the struggling John Lackey, they’ll leave Beantown with a two-game bulge over the Sox. Yikes.

Brian McCann got off to a great start this year for the Braves, but after he went hitless in the final two games of the Philadelphia series, it sure was nice to see him blast his first homer of the season in Tuesday’s win over Florida. He’s spent most of the season in the clean-up slot for the Braves, and while he’s been hitting extremely well (.350 BA) the dinger Tuesday was his first extra-base hit in 2011.

It’s a bit of a worry, considering that since his career year in 2008 when he spanked 66 extra-base hits, McCann slipped to 57 in 2009 and just 46 last year. He turned 27 a couple of months ago, and those of you that subscribe to the age 27 year theory are certainly expecting him to enjoy a big power spike this year. It may very well still happen, but this is a rather inauspicious start. Personally, I’m expecting big things from him considering he slimmed down this offseason.

By RotoRob
This entry was posted on Wednesday, April 13th, 2011 at 1:32 pm and is filed under BASEBALL, MLB Today, RotoRob. You can follow any responses to this entry through the RSS 2.0 feed. You can leave a response, or trackback from your own site.