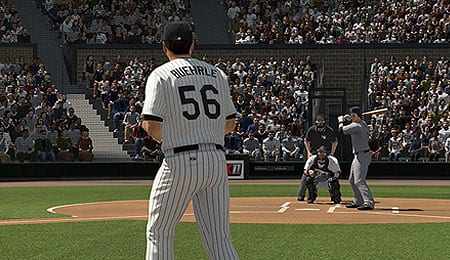 Pitching in MLB 2k11 is fantastic and rates as the game’s high point.

Last year was an important one for the MLB 2k series as it was coming off the critically panned MLB 2k9 and needed to bounce back in a major way. For the most part it succeeded, tightening gameplay and introducing the all-new My Player mode. A similar leap this year could push MLB 2k11 to another level, allowing this title to challenge Sony’s MLB ’11: The Show for top honours. Did it happen? Read on.

Not a lot has changed here versus last year’s version. At the plate you still have access to three types of swings (power, contact, defensive) mapped to the right analog stick. Unlike MLB ’11: The Show, you’re only asked to time bat to ball rather than contact and plant foot — it’s a simpler setup than Sony’s offering.

Pitching in MLB 2k11 is virtually identical, which is to say, excellent. I love the combination of rotating the stick to execute different pitches while also timing up the meter to maximize power. It keeps me involved and feels more interactive. It’s perhaps my favourite use of the analog stick in any sports title with the possible exception of firing slap shots in EA’s NHL series.

In the field, players’ defensive ratings mean more than ever in how they react to a ball in play. I definitely felt like I needed to be sharper this year and not rely on the computer as much, though the controls themselves are familiar. Base running can be a bit shaky, and stealing bases — a feat that was nearly impossible two years ago — may have gone too far in the other direction.

When playing MLB 2k11, there are times that it can be difficult to look at. Player models are a bit more lifelike than last year, but the faces are rough. For example, one of my created players had a stubble beard. Most times it looked OK, but during certain replays or semi-close ups (like those seen at the end of games) it looked like he had some weird black static monster attacking his face. It’s not limited to created players, either, as there are plenty of established vets that look almost nothing like their virtual representations here.

Although they lack the photo realism of The Show, in-game animations are generally smooth. The ball physics based off pitch location, swing type and timing are also strong, and I never got the feeling I was seeing canned flight paths of the ball. There are a few exceptions — players rounding bases take awkward looking choppy steps — and some bizarre looking glitches here and there, but nothing that gets in the way of how the game is played.

In-game presentation features intelligent replays such as important previous at-bats and pitch sequencing along with a dizzying amount of statistical information relayed via overlays or commentary. Stadiums and lighting represent two of the better elements visually, particularly during day games when things look bright and vibrant.

When it comes to commentary, 2kSports takes a backseat to no one, and the three-man team of Gary Thorne, Steve Phillips and John Kruk continue that strong tradition. They reference stats, discuss career trends for individual players, track recent performance levels and just do a fantastic job of mimicking what you hear when watching a live baseball telecast. The highest compliment I can give is that during my ascension through the minor leagues, which has no commentary, I missed hearing them talk. The crack of the bat, gloves popping, fan reactions and ambient noise are all solid.

As a “rookie” in 2010, My Player felt like a work in progress — an enjoyable one to be sure, but a work in progress nonetheless. For starters, jumping from Double-A to the majors was incredibly easy and could be done in the matter of a few hours or less. That’s been tweaked a bit this year, and while I still never set foot in Triple-A it definitely took longer and was more rewarding when I got the call.

Outside of that, however, not a whole lot has changed. You once again open in Double-A entrenched in whatever role you chose. There’s no earning your way into the starting lineup or rotation, you’re just given a spot and left to sink or swim. Points are earned in various categories (hitting, fielding, baserunning) and must then be redeemed to improve in those areas.

Points are generally easy to amass, particularly at the plate and fielding your position. Each at-bat gives you a specific goal (get on base, advance the runner, don’t swing at a pitch out of the strike zone), which is fine, but they seem completely random and are often counter intuitive. If there’s a runner at third base the goal should always be to get him home, right? So then why am I being asked to get ahead in the count when a simple fly ball will score a go-ahead run?

Fielding your position remains pretty dull with minimal variety. I logged over 75 games at second base and never made the turn on a double play, applied the tag on a stolen base attempt or was the cut-off man when I needed to gun down a runner at home. Infielders do more than take grounders and shag pop flies so hopefully that is factored in for MLB 2k12.

Arbitrary batting goals and mundane fielding situations can’t undermine the inherent fun in My Player, but some clueless A.I. takes a stab at it. Put bluntly, your A.I. teammates are atrocious, particularly on the base paths. Conservative doesn’t even begin to describe their approach as you’ll repeatedly get hits that should push runs across only to watch the computer stop at third. A two-out single with a runner on second ought to score him 95 per cent of the time. Here you’re lucky if it’s 50/50. And that just scratches the surface. I could easily list scenario after scenario where fundamental base running isn’t being followed.

Your teammates can’t seem to hit a lick with men on base, either. Over the course of my two separate ascensions to the majors as a position player I tallied over 170 games. In that time I collected more than 250 hits, and yet not once did anyone hit a home run with me on base. Conversely, the number of called third strikes that were taken was stunning. Messing with the sliders can alleviate some of the issues, but as in years past it would appear that adjusting them nullifies achievements.

While all that may sound like a lot to overcome, I still had fun in My Player. In The Show it’s much more of a grind with the majors always feeling a long way off until you actually get there. Here there is more instant gratification and very specific goals, based on both performance and talent ratings, which make you feel like you’re progressing rapidly toward starting your major league career.

Franchise mode is back and will be very familiar to anyone that’s played in recent years. One new addition worth mentioning is the game’s take on in-season injuries. Rather than just the traditional “This player is out for X games with Y injury,” MLB 2k11 actually has players incur regular wear and tear. These are the kinds of injuries you can have your players grind through at the risk of further injury or simply sit them down for a couple days to heal rather a full-fledged DL stint.

In theory this should add even more realism to your franchise. In practice, guys were getting banged up far too often, and mild knee contusions were morphing into serious shoulder ailments. Still, the concept is sound, and I’d like to see a tweaked form return for next season. On a related note, player fatigue is not working properly in Franchise Mode if you play (as opposed to simulate) the games, as everyone resets to 100 per cent the following day. That means until a patch arrives, you’re pretty much on the honour system not to throw your ace 162 days in a row.

Simulating through multiple seasons produced reasonable numbers, both hitting and pitching, and player progression/regression looked good. Power numbers are still a bit low (I didn’t see anyone reach the 40-home run plateau), but I’d rather see guys in the low-to-mid 30s than Jason Kendall socking 20 bombs. Trade A.I. is pretty good, though free agency seems to be consistently devoid of top-level talent, which keeps going the anti-Scott Boras route and inking extensions before they hit the open market.

The games themselves are fun, offering up a challenge on the higher difficulty settings where pitchers work corners and keep baserunners honest, while hitters are savvy and will punish mistakes. Those that prefer a more casual approach to the game should find the lowest setting a notch above batting practice, which can make a nice retribution outlet against the computer. Managerial A.I. is still too slow with the hook and too often bypasses sound baseball strategy when it comes to things like situational relief or advancing runners.

As noted in my review of MLB ’11: The Show, I’m not a fan of online baseball because of the timing aspects. However, I must admit that MLB 2k11 flows pretty smoothly with minimal lag. The tradeoff is that you’re getting a completely bare bones experience. No replays, no stats, no box score popping up in between innings. It’s just you, your opponent and the commentators.

More often than not, I had a good time playing MLB 2k11. That being said, there are still a number of issues that would benefit greatly from another layer of polish — the foundation is in place, now it’s up to 2kSports to take it to the next level.

By Herija Green
This entry was posted on Tuesday, April 12th, 2011 at 11:20 am and is filed under BASEBALL, Herija Green, Video Game Reviews. You can follow any responses to this entry through the RSS 2.0 feed. You can skip to the end and leave a response. Pinging is currently not allowed.