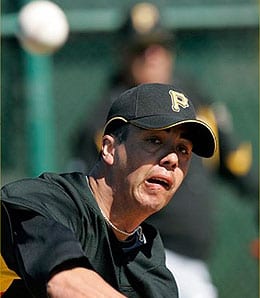 After his utter lack of control, it’s no wonder that Jeff Karstens looked horrified.

Well, that didn’t take long. After dropping the final two games of their three-game set against the Astros, the Pittsburgh Pirates have returned to a place they know oh so well – sub-.500 land. The Buccos still have six games remaining on this nine-game homestand, so let’s not punch their passport to a record setting 17th straight losing season quite yet, but with the revitalized Braves and smoking hot Marlins heading into town over the next week, even the “friendly confines” of PNC Park may not be able to stop Pittsburgh from sinking further under the even water mark. But hey, on Sunday they turned their first triple play in 16 years – which was the same season that the losing all started. I can’t figure out if that’s a good omen or not. Any suggestions?

It’s only fitting that it was on this day in 2001 that the star of the last good Pirates team – Barry Bonds – hit his 500th career home run. Of course, by that time, he had long since departed Steel City and had headed west to The City.

Pirate starter Jeff Karstens suffered from a major lack of control in his season debut on Thursday, walking five in just four innings. Manager John Russell blamed Karstens’ lackluster effort on his lack of game action, saying “it’s just a matter of competition.” Karstens hadn’t thrown to major league hitters since March 31, so he was clearly rusty. He had his moments last season, but at this point, I’d watch a couple more starts before given him any fantasy consideration, even in a deeper NL-only league.

Nate McLouth struck out once and stranded three runners – included one in scoring position with two outs – but he continues to show signs of life after his sluggish start. He singled and scored, making him 4-for-11 in the past three games. It’s definite progress after McLouth managed just three hits in the first six games.

So far, one of the best stories out of Pittsburgh has been the superb start by Paul Maholm, who looks like he’s taken his game to a new level. After earning his first win of the season Saturday in very impressive fashion (seven innings, three hits, one run, two walks, three strikeouts), Maholm has gained nice traction on the wire this week. He’s been hard to hit so far, with a .200 BAA through two starts, and better yet, he’s failed to yield a home run – an area he showed progress in last season as well. I have my doubts about Maholm’s ability to maintain the low homer rates, however, as he’s giving up more fly balls in the early going, so he may just be a bit lucky so far. Let’s see how he does Friday night against a dramatically improved Atlanta offense before we completely jump on Maholm’s bandwagon as a breakout candidate.

On Wednesday, Pirate GM Neal Huntington made a move to improve the team’s bench, acquiring Delwyn Young from the Dodgers for either two PTBNL or cash. He’s a switch-hitting corner outfielder who can also supply back up at second base if needed. Young also has some upside, so this could be a decent, albeit minor move.

How the hell are the Padres (7-3) tied for first in the NL West when their No. 3 hitter is Brian Giles? Giles took a second straight 0-for-4 Thursday, leaving him at 5-for-39 with one extra-base hit through the first 10 games of the season. If you’re in a deep NL-only league, go ahead and see if Giles can get his act together; otherwise, terminate him with extreme prejudice.

Jason Kendall, another ex-Pirate star who looks ready for pasture, doubled, scored and drove in two runs Wednesday – a veritable offensive bonanza considering he was 2-for-21 before that. Kendall’s up to a robust .120 now, leaving him just 70 odd points away from hitting his weight. He experienced a slight rebound offensively last season, showing some gap power, but again, this is very deep NL-only league material at this point.

Astro fans aren’t impressed that the team gave up Drew Sutton as the PTBNL in the Jeff Keppinger trade. Sutton, 25, had a huge performance at the AFL in 2008 and could have helped Houston with its third base situation, but instead he brings his upside to the improving Reds.

The World Champion Philadelphia Phillies have another future star on their hands. Domonic Brown went 1-for-6 in a double header on Thursday to slip to .231 (6-for-26) in the early going at High-A Clearwater, but prospect watchers need to add this name to their list. This 21-year-old outfielder is the Phillies’ top prospect. And at 6’5” with great tools across the board, Brown is an imposing figure. Because it looked like he was headed for college football, he slipped to the 20th round in 2006. Can you say bargain?

York Revolution, an Atlantic League team, has invited a man less than half Brown’s height — 3’2” Dave Flood – to its training camp. You gotta love Indy ball. Or not.

Anyone remember Otis Nixon’s amazing catch to rob Pirate Andy Van Slyke of a sure home run in 1992 (which, by the way, was the last winning season by the Pirates)? I came across the video, and it’s worth a second look.

C.C. Sabathia’s control problems returned Thursday, as he issued five walks in 5 2/3 IP. Only this time – unlike his Opening Day debacle – he only gave up five hits and one run and actually managed to strike someone out. In fact, he whiffed four. Sabathia’s command is awful so far, but he’s already way better than he was last April.

By RotoRob
Tags: BASEBALL
This entry was posted on Friday, April 17th, 2009 at 10:33 am and is filed under BASEBALL, Fantasy Notes, RotoRob. You can follow any responses to this entry through the RSS 2.0 feed. You can leave a response, or trackback from your own site.