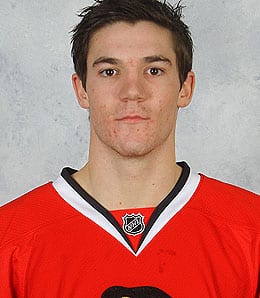 Andrew Shaw is providing secondary scoring for the Hawks.

In Game Two on Sunday, the Chicago Blackhawks wasted no time in jumping on Los Angeles Kings goalie supreme Jonathan Quick, scoring an early and then late in the first period and adding goals midway through the second period on consecutive shots to send him to the bench.

That was all the Hawks could muster, but it was more than enough as they hung on for a 4-2 win for their fifth straight win and a commanding 2-0 lead over the defending champions in the Western Conference Finals.

Andrew Shaw, who came up so big in that Game Five win over Detroit that launched Chicago’s comeback, got the party started Sunday, scoring less than two minutes into the game for his third tally in the last five games.

Now the series shifts west to Los Angeles for Game Three on Tuesday. As we mentioned, thinking Chicago is home and cooled is unwise. LA has won 14 straight at home and dug its way out of that 2-0 hole vs. St. Louis with four straight wins. No way will this team panic with all that championship confidence in the dressing room and that banner proudly hanging from the rafters.

But let’s put things in perspective: four goals against Quick and the Kings in a playoff game is seriously rare footage. LA had a run of 34 straight playoff games in which it gave up three goals or less – by far an NHL record. When Jonathan Bernier took over midway through the second, it marked the first playoff action of his career as he never got off the bench during the Kings’ run the Cup last season.

Re-signing restricted free agent Bollig helps address any concerns the Hawks had that they won’t be tough enough. In his first NHL action this season, he went scoreless in 18 games, but racked up 58 penalty minutes in seeing less than six minutes of action per game.

The timing of the report about newly discovered – but apparently already healed broken neck vertebrae – couldn’t have been worse, as the NHL was celebrating its best and brightest when its absolute best and brightest was dealing with a new complication in his one-year battle to return to full health.

By RotoRob
Posted in HOCKEY, NHL Today, RotoRob | No Comments »

This team has now gone a season-high five games without a win (0-3-2), fumbling their chance of earning the Eastern Conference’s top seed – a ranking that seemed a foregone conclusion a week and a half ago. Hell, the Flyers might not even win their division, which would relegate them to the No. 4 seed.

The fact that the Isles went 15-9-5 in February and March was promising, but definitely a classic case of too little, too late. Now they’re sputtering to the finish line, having dropped both games in April with their final two games coming against the Penguins and Flyers this weekend. It’s quite conceivable the Isles will wrap up their schedule with a four-game losing skid.

By RotoRob
Posted in HOCKEY, NHL Today, RotoRob | No Comments »