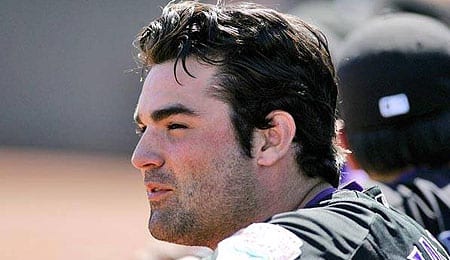 Could Conor Jackson carve out some value for the offensively-starved A’s?

Yes, that was Conor Jackson driving in the go-ahead run Thursday as the A’s salvaged a game in Toronto. Mostly because of injuries, this one-time top prospect has completely fallen off the map the past couple of years, beginning with his bizarre bout with Valley Fever in 2009.

Now in Oakland, where anyone that shows a modicum of hitting ability gets a chance to play, not only is Jackson suddenly seeing action against lefties, but on Thursday he found himself in the three-hole of the Athletics lineup. Yes, the A’s are lacking for bats. This is not a newsflash.

At any rate, with the Jays starting southpaws in the opening and closing games of this series, Jackson got a pair of starts, and he responded with three hits, a walk and two RBI. If he continues to produce (and play defense – he made a sparkling catch to end a threat in the sixth), his playing time should increase, so he’s a name for AL-only league owners to put on their radar. Oakland is clearly desperate for an offensive spark, so keep an eye on this situation.

Meanwhile, Bob Geren’s crew has started the season on a disconcerting trend of losing the first two games of each series and then scrambling to avoid getting swept. Let’s see if the A’s can alter that pattern with a three-game set starting Friday in Minnesota, another team that hasn’t exactly jumped out of the gate.

On the plus side, under new pitching coach Ron Romanick Oakland’s hurlers have picked up right where they left off under Curt Young. Oakland had the top pitching staff in the AL last year, and while it only ranks fifth so far, through a half dozen games, the numbers are nearly identical to 2010. The staff could get also boost whenever (if ever) Rich Harden makes it back (he’s reportedly making progress, throwing a bullpen session Thursday and scheduled to throw live batting practice Monday). I can’t seem him cracking the rotation, but maybe he’ll be useful out of the bullpen.

At any rate, pitching is once again going to be this team’s bread and butter, as the offense has regressed in the early going.

Shortstop Cliff Pennington got off the schneid a bit with a hit in each of the last two games after managing just one hit through the first four games. Unfortunately, he’s scored just one run, has failed to drive in any and – paramount to whatever Fantasy value he’ll offer – he’s 0-for-1 on the basepaths.

We ranked him as the 19th best shortstop heading into the season based on the fact that only three players at his position had more steals than the 29 he racked up last year. However, Pennington is barely looking like a top 40 shortstop at the moment. Consider it a nice buy-low opportunity.

Let’s face it – the dude is keeping the seat warm for Grant Green, and Pennington certainly didn’t do anything to suggest otherwise in his first season as a full-timer last year. But a guy that can swipe 25+ bases at a tough to fill position does have some use, at least while he has a job (and until Green is ready, Pennington’s solid defense ensures he’ll be in the lineup most of the time).

Another hitter off to a sluggish start (the list is a long one) is third baseman Kevin Kouzmanoff. He had back-to-back multi-hit game earlier in the week, but went 0-for-5 over the final two games in Toronto. After his two-error debacle on Tuesday (giving him three errors in four games), Kouz didn’t start Wednesday, allowing Andy LaRoche a chance to play.

We ranked Kouzmanoff 25th among third basemen this season, and he’s been playing pretty much at that level. Considering that his OPS looks like it just went for a dip in very cold water and he’ll reach 30 by mid-season, you’ve got to wonder if we’ve already seen the best of Kouzmanoff, a player so many expected greatness from once upon a time. He’s an AL-only asset at best at this stage of the game and if he continues to bring his stone glove to the field, LaRoche could start stealing more and more of his PT.

As we continue our tour of underperforming A’s hitters, first baseman Daric Barton enjoyed a big game last week against the Mariners (3-for-4, two doubles), but those were the only hits he mustered in the first four games. Fortunately, he was more productive in the past two games, going 2-for-6 with a run, an RBI and a double. Mr. OBP has also been up to his usual tricks, drawing a walk in each of the last four games. Unfortunately, Barton has been taking fielding lessons from Kouzmanoff, as he already has three errors – a shockingly high total for a first baseman this early in the game.

We ranked Barton among the top 25 first basemen in the game, but he has not lived up to that yet.

It doesn’t matter how good the A’s pitchers are if the fielders behind them keep giving the opposition extra outs. Given how little Oakland scores, it can only succeed if it limits damage. And right now, what was a pretty good defensive team last year looks awful so far in 2011, with 50 per cent more errors than anyone else in the AL.

Second baseman Mark Ellis didn’t start Thursday because an inner-ear infection was causing him to be dizzy (which is exactly how most of the A’s fielders have looked all season), but he did come in late (for his 1,000th career game) and got a hit in his only at-bat, giving him hits in five of the first six games. That qualifies Ellis as being one of the hottest A’s hitters, sadly.

We had Ellis as top 30 option at second base, and that’s exactly what he’s been. Through his career, he’s occasionally flashed decent pop, decent speed and the ability to hit for average, but has never really combined all these skills as his career has been marred by injuries and inconsistency. He’s a decent player to plop on your AL-only team’s bench, but otherwise – meh.

By RotoRob
Tags: MLB
This entry was posted on Friday, April 8th, 2011 at 1:56 pm and is filed under BASEBALL, MLB Today, RotoRob. You can follow any responses to this entry through the RSS 2.0 feed. Both comments and pings are currently closed.