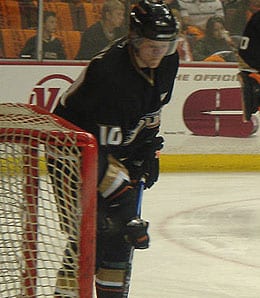 We’re back with more of the 2010-11 RotoRob NHL Draft Kit today with another of our famous Cheat Sheets. While you wonder if the Coyotes will ever get a new owner, let’s take a look at the Top 25 right wingers in Fantasy hockey.

Now to our list…oh my.

Last season’s rankings are in parenthesis.

1. Patrick Kane, Chicago Blackhawks (11): Kane had 88 points despite all the “20 cent” jokes and had a 30-goal season while helping lead the Chicago Blackhawks to their first Stanley Cup in 49 years. The key to Kane’s big jump last season was he kept that shot total up at 261 and, as a bonus, played a bit better defensively; that +16 was a career best. The scary thing is this: many think he can only get better with the increased burden of scoring. Kane is the type of player that can only improve. The skill and young age are two things definitely in his favour and he should easily top this list. Our projection for him is about 35-54-89…pretty nice.

2. Martin St. Louis, Tampa Bay Lightning (2): Well, St. Louis exceeded expectations in 2009-10 with a 94-point season. After seasons of 102, 83, 80 and 94 points, I think St. Louis has another really good year left in the tank. His 21:00+ ATOI also helps. St. Louis is fast, can create his own shot, and the 14 PIMs means he stays on the ice. With a guy like Steven Stamkos on his side, it won’t be bad at all in Tampa Bay. St. Louis is just too good not to get a bunch of points on the power play and the occasional short handed goal which Fantasy owners just drool over. I’m expecting an 85-to-90 point season out of this guy. How about 36-51-87 with a few more PPGs and about 275 shots on goal?

3. Marian Gaborik, New York Rangers (12): Gaborik deserves credit for staying healthy enough to play 76 games and tally 86 points on a team where he was clearly the focus. The 14 goals on the man advantage was also a boon for Fantasy owners who literally watched Gaborik buoy the Rangers for long stretches. So what to do here? Does he stay healthy again? If Alexander Frolov flourishes, Gaborik should be a 40-40 man again which means he should be one of the first two or three RWs taken. Expect about another 42-44-86 line from Gaborik, but maybe in less games…say 70 or so.

4. Jarome Iginla, Calgary Flames (1): Iginla is not quite the same, but hey, Olli Jokinen is back in Calgary for what it is worth. At times, Iginla went so cold last season that we thought it was -40 in his wheelhouse. The 69-point campaign was a vast disappointment for the man who nearly led the Flames to the 2004 Stanley Cup. That seems like two lifetimes ago. Ignila’s average of 0.84 points per game bothers me more than anything. That is a marked dip for a guy who has been around or above one point per game annually. We were way off on our expectations of Iginla last season, but there is no way that will happen again. Just warm up the retirement bus slowly as Iginla will get around 75 points. But let’s face it, that is not what you want to see from this guy. So about 39-36-75 should do it! Oh, by the way, if the Sutters get canned, Iginla may be better off. That one may have to be explained later.

5. Corey Perry, Anaheim Ducks (4): Perry qualifies as a Right Winger, so this works well. Last season, he had 76 points along with 270 shots and 111 PIMs. I am intrigued more with the middle number…the 270. It is also why I think the 27 goals he put up last season is a number he can exceed this season. That first line in Anaheim is pure gold and anyone that tells you any different might as well being an ostrich with its head in the sand. God help them! Perry can also average right around a point a game…and to think this guy is only 25. Our projected numbers for him are about 38-43-81 with a decent plus/minus and about 280 shots on net.

6. Marian Hossa, Chicago Blackhawks (16): All Hossa did was get 51 points in 57 games last season despite the shoulder injury that kept him out for the first chunk of the campaign. Now healthy, Hossa should get more time with less marquee players in Chicago. The only concern was that he compiled just seven points on the man advantage. Hossa is a sniper and with guys like Patrick Kane and Jonathan Toews on the roster, he should be just fine. So what will Hossa be able to do in a full season? Well, a 75-point season should be just fine for Hossa owners. He is not expected to be the main man in Chicago and that suits him just fine. He should add ten goals on the extra man and a few short handed tallies as well. Hossa could see 20:00 ATOI and accumulate nearly 280 shots on net if all projects out. That is why he has risen to No. 6 on our list and may fall under the radar a bit in some leagues. Keep a watch out.

7. Daniel Alfredsson, Ottawa Senators (12): Alfredsson piled 71 points in only 70 games last season and the addition of Sergei Gonchar may actually help Alfredsson; another “elder voice” in the locker room cannot hurt. The offense will have to score and Alexei Kovalev is a major concern obviously. That being said, Alfredsson at least can do very well for himself this year. I can see a 75-point season in about 75 games for him as he right around a point per game guy. The assists on the man advantage are big, but I see Alfredsson potting a few extra goals this year. There may be just one 30-goal season left in the old captain.

8. Martin Havlat, Minnesota Wild (6): Havlat should have a better season since 2009-10 started out so poorly. The 54 points he cobbled together in 73 games with a -19 was just painful to watch as he did stay relatively healthy. With Mikko Koivu at the ready and a team looking to not repeat last season’s embarassing start, Havlat should improve quite a bit. I think he can stay healthy…at least enough to rack up some big points. So more ice time, more man advantage time, and more shots should mean more points…right? Well, only to a point. So an uptick to ten PPGs with 30 goals, 42 assists and 72 points in 78 games should be just about right.

9. Ales Hemsky, Edmonton Oilers (7): Hemsky’s 2009-10 campaign was lost to a shoulder injury way too soon. A healthier Hemsky will at least lead to some goals being scored in Edmonton. I stand by a 72-point season at 29-43-72. I know Hemsky can pile up the assists, but he will also get a few more goals on the man advantage. He is only 27 so at least the ceiling is not limited just yet. Hemsky’s prime is approaching and he is reportedly in very good shape heading into camp next month. He could push 200 shots and near 20:00 ATOI. So expect a nice season if you can snag him a bit later in drafts.

10. Jamie Langenbrunner, New Jersey Devils (10): The reason Langenbrunner cracks our top 10 is simple…he plays with Zach Parise. Langenbrunner is coming off an off season — especially compared to his recent levels of production.The 61 points included a meltdown from mid-March that culminated in him being called Mr. Grumpy. Langenbrunner has something to prove and that is why he rounds out this top ten in a thin pool. The 200-plus shots trend will continue for him. Oh , and the +25 is really about what he will do again this season. The Devils PP may actually be better this season with an infusion of youth, so Langenbrunner could get nine or ten PPGs, and that means the following overall stats: 30-41-71. Add in about 230 shots on net and 19:00 ATOI and you have a guy that just stays in the top ten by the slimmest of margins.

11. Jason Pominville, Buffalo Sabres (15): Simply put as Thomas Vanek goes, so goes Pominville. It will be interesting to see how Pominville starts off this season. However, I think he may surprise and does have some definite Top 10 potential.

12. Brian Gionta, Montreal Canadiens (12): Expect a rebound season with the Habs. A full season of Michael Cammalleri should be a boost to Gionta’s production and music to everyone who owns the “Rochester Rocket.”

13. Patric Hornqvist, Nashville Predators (NR): Hornqvist can score goals…even in Nashville. I would not be surprised to see him score around 30 again and improve on last season’s totals. Think a poor man’s Loui Eriksson.

14. Bobby Ryan, Anaheim Ducks (3): Call it lower expectations; that, and the drama hurts. The contract squabbles heading into training camp really do create a sour environment at least to start. Anaheim’s defense is, well, “offensive” in that bad sense and if Ryan is not on the top line with Perry and Ryan Getzlaf, it could spell curtains, Fantasy owners.

15. Teemu Selanne, Anaheim Ducks (18): Selanne’s final season has potential with Saku Koivu. Selanne will at the least go out with a bang for Anaheim. Chances are he also stays healthy.

16. Devin Setoguchi, San Jose Sharks (17): A nice season for him could be a springboard and being paired with Joe Pavelski does not hurt either. If San Jose is to do anything, it needs that duo to catch fire early, late, and often.

17. Chris Stewart, Colorado Avalanche (NR): Maybe a few too many points? Not necessarily. Stewart has the talent to match last season’s breakout. This is a nice way of saying it was not a fluke.

18. Phil Kessel, Toronto Maple Leafs (15): Kessell will play a whole season and score at least. Forty goals is not out of the question, but do not expect 40 assists as well.

19. Alexei Kovalev, Ottawa Senators (5): Kovalev is truly an enigma. It really is anyone’s guess as to what happens with a guy like this. His age is getting up there and you may want to stay away from him.

20. David Backes, St. Louis Blues (20): Backes has nice potential and could finally tap into it. The Blues will improve on the Power Play and that is likely where the extra points will come from.

22. Kris Versteeg, Toronto Maple Leafs (NR): Versteeg could click with that Kessel guy, which would make him attractive in the very late rounds in deeper leagues.

23. Milan Hejduk, Colorado Avalanche (18): This is likely it for Hejduk. There is really not much more to say here honestly, but at least he will pile up some points.

24. Nathan Horton, Boston Bruins (NR): If Marc Savard is still in Boston, Horton could definitely benefit. If not, expect an injury or two as that is how Horton operates.

25. Shane Doan, Phoenix Coyotes (8): Not only is Doan the captain, but he is the Coyotes’ most consistent point guy. He had to be on this list like and could surprise one more time.