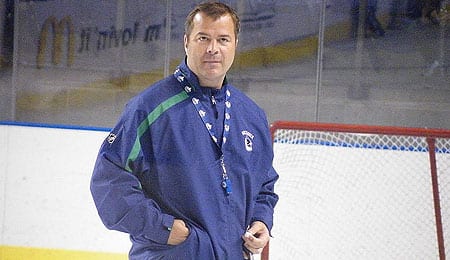 Alain Vigneault has the Canucks looking like the Stanley Cup favourite.

Can anyone stop the Vancouver Canucks?

On Wednesday night, they walked into Detroit – their closest competition for the Western Conference crown – and beat the Wings 2-1 to open up a virtually insurmountable 10-point lead atop the conference standings. Each team has eight games to play.

Vancouver is now eight points ahead of the Eastern-leading Flyers (who have two games in hand) for the best overall record in the NHL, an honour that will give the Canucks home-ice advantage throughout the playoffs.

The Canucks have won eight of their past nine games as they leave no doubt about who is the best team in the NHL this season. Could this be the year that Alain Vigneault’s crew takes home its first Stanley Cup?

As usual, it was Daniel Sedin leading the way for Vancouver on Wednesday. He scored both goals to reach 40 for the first time in his career. He’s now recorded points in nine straight games, potting eight goals and eight assists over that stretch. Sedin’s scorching play down the stretch has many believing that he’ll wrestle the Hart Trophy away from his twin brother Henrik this season. It’s hard to argue with that considering how unstoppable the Canucks have looked.

The funny thing is that Daniel barely made it to Detroit in time for the game, as he was awaiting the birth of his third child. Unfortunately for the Wings, Sedin’s wife squeezed out the pup in time for Daniel to do his damage to help the Canucks win a major statement game that could easily be a preview of the Western Conference Finals, and certainly had a playoff feel.

Not surprisingly, Henrik set up both of Daniel’s goals and he now has 70 assists in 74 games, reaching the mark for the third time in his career. In our pre-season rankings, we expected Henrik to be the third best centre this season, but we’d venture to say that only Steven Stamkos has been more valuable at this position in 2010-11.

As mentioned, Henrik was the league’s MVP last season thanks to winning the scoring title, but this season he remains seven points behind Daniel in the Art Ross Trophy race. These two are changing the mental picture most get when you put the phrases “Fantasy” and “Swedish twins” in the same sentence from this to this. I’m not sure that’s a good thing, but you have to give the brothers their due – they have become the most lethal offensive combination in the NHL.

In more good news for the Canucks, they got defenseman Kevin Bieksa back Wednesday. The rugged blueliner – part of Vancouver’s top defensive unit – had missed 15 games with a busted foot. Bieksa was rumoured to be on the trading block in the offseason, but the Canucks retained him and he’s rewarded them with a career-best +26 ranking. If Bieksa was dropped in your league – and there’s a decent chance he was – go get him now.

By RotoRob
This entry was posted on Thursday, March 24th, 2011 at 12:55 pm and is filed under HOCKEY, NHL Today, RotoRob. You can follow any responses to this entry through the RSS 2.0 feed. You can leave a response, or trackback from your own site.