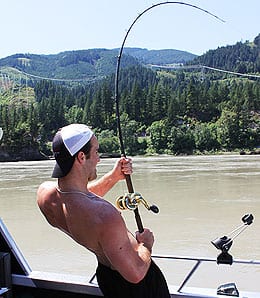 Those that fished for Andrew Ladd this season have gotten more than they bargained for.

Hello, kids. After a long absence, The Wire Troll is back because this is the time of year when Fantasy hockey begins to take shape at long last. Usually, seven or eight weeks into the NHL season, owners become exasperated. The Troll has sat on the bench long enough; we asked the coach to put us in and hopefully next week will be the week. First, however, we need to set the scene for all those beleaguered Fantasy owners out there.

Just think about all the surprises so far this year. There are the Andrew Ladds of the world that have blown up, and then they are those that just have been blown out the water in the early part of the season. Will these early-season trends continue?

There are players that are still on your local waiver wires that are better than the 196th-ranked scorer in the National Hockey League. Who would that be? That would be Ilya Kovalchuk. Honest. Do not think we forgot about all those defensemen and goaltenders out there, either. We would never do that.

This season, The Wire Troll will focus on the deepest of bargains. These are players that are owned by less than 50 per cent. To be fair, rarely will we look at players that even have 40 per cent ownership.

Why is this? The goal this season is to really dig deep into the belly of the beast that is the waiver wire. Normal pick ups will not garner attention in this realm. There emphasis here is on heading into almost the nether regions of existence where the real diamonds in the rough lie.

It is like trying to find out if that Tomas Fleischmann rumour that has him going to Vancouver for Kevin Bieksa is really true. There is never a huge degree of certainty with these choices, but we’d like to think there are more right ones than wrong.

The correct philosophy is this: The time of year to make your move in your league is from now until the regular season ends. Each week we will handpick three players off the waiver wire that we deem could help your Fantasy team. On the surface, they may only help in a category or two but sometimes that is all the difference.

Noticing and observing trends is always important, but not solely the end all most crave. We suggest that every so often you watch some games other than those of your favourite teams and look at the game from a Fantasy perspective. One will quickly notice the difference, so this certainly does not mean you should stare at the computer screen for days on end.

Hopefully there is much help to be had and if there are any questions, do not hesitate to drop us a line in using the ‘Fantasy Question?’ link in the left sidebar or even on Twitter as well. I am personally very easy to find. Good luck in your leagues and there will be one name that is dropped here this week and that is Henrik Karlsson. Keep an eye out for him. See you next week with three more names plus an explanation here on The Wire Troll. Don’t forget to keep your heads up.

By Chris Wassel
This entry was posted on Monday, November 29th, 2010 at 12:20 pm and is filed under Chris Wassel, HOCKEY, The Wire Troll. You can follow any responses to this entry through the RSS 2.0 feed. You can leave a response, or trackback from your own site.