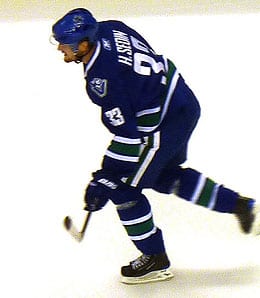 We’ve got more of the 2010-11 RotoRob NHL Draft Kit today with another of our cheat sheets. So while you wonder what kind of impact Mike Comrie will have in Pittsburgh, let’s take a look at our picks for the top centres in Fantasy hockey.

When you look at the list of centres available for Fantasy hockey, the depth is much stronger than the other forward positions. Any of the top five picks could push for the Art Ross based on luck and health; similarly, there’s plenty of argument to switch the No. 10 to No. 20 guys around. The best way to look at it is in groups of five, then draft based on individual needs: goals, special teams, shots, etc.

Last season’s ranking are in parenthesis.

1. Sidney Crosby, Pittsburgh Penguins (2): Sorry, Crosby haters. Now that he’s got a 50-goal season under his belt, you’ll just have to acknowledge that he’s just this darn good. His shot total has gone up, his goal-scoring has made him even more valuable in Fantasy leagues, and he even gets you PIMs. Crosby will play both special teams units, which means all sorts of bonus points in your league.

2. Nicklas Backstrom, Washington Capitals (5): Backstrom was Washington’s best player in the playoffs, and he was all over the ice. He’s hit his stride now, and playing alongside a healthy Alex Ovechkin all season could allow Backstrom to push for the Art Ross trophy. Backstrom’s game and his overall consistency are getting better from year to year and there are no questions about him, unlike teammate Alexander Semin.

3. Henrik Sedin, Vancouver Canucks (11): One Hart and one Art Ross later, suddenly Sedin has hit the stratosphere. If he were a 24-year-old just skating into his prime, he’s be challenging Crosby for the top spot on this list. However, the most sensible prediction is that last season was the peak of Sedin’s career and it’ll be difficult to duplicate that performance. Look for him to regress just a bit this season.

4. Evgeni Malkin, Pittsburgh Penguins (1): Malkin had his first “off year” — and an off year for Malkin still projects out to a 95-point campaign had he played all 82 games. While his spark seemed missing for a good chunk of the season, the Fantasy totals were there when he skated. A bounce-back season where he breaks 100 points seems likely.

5. Steven Stamkos, Tampa Bay Lightning (NR): No one could argue with Stamkos’s development; from the second-half of his rookie campaign to his final game last season when he tied Crosby for the Rocket Richard Trophy as the NHL’s leading goal scorer, Stamkos has gone steadily upward since the Barry Melrose debacle. However, just about every player hits a rough patch after peaking — it could have anything to do with mental maturity to defenses keying in more. It’s logical to expect things to dip a little bit, though not too much considering Tampa’s stacked forward lineup.

6. Joe Thornton, San Jose Sharks (7): Another year, another 90-point season for Thornton. His year-to-year point totals have dropped since winning the Hart Trophy, but he’s still a lock for at least 90 points. Thornton’s point total also depends on his linemates, as he thrived most as part of the Team Canada trio with Dany Heatley and Patrick Marleau. San Jose has so many offensive weapons, though, that no line combination may stay intact for long.

7. Eric Staal, Carolina Hurricanes (8): As Staal goes, so go the Carolina Hurricanes. After being named captain, he went on a tear. His momentum should carry forward and with healthy teammates, 90 points is a good starting point for Staal, who is just hitting his physical prime.

8. Ryan Getzlaf, Anaheim Ducks (3): Who knows how high Getzlaf could have gone had he been healthy. A 100 per cent healthy Getzlaf (and healthylinemates Bobby Ryan and Corey Perry) could push 100 points — but his injuries are the kind that could nag throughout a career and this is a reason to hesitate ever so slightly.

9. Pavel Datsyuk, Detroit Red Wings (4): Datsyuk dropped from two consecutive 97-point seasons to 70 points in 2009-10. Of course, the entire Detroit roster fought both injuries and inconsistency. Datsyuk is too much of a slick talent to be held down and there’s no reason why he can’t bounce back to at least 80-to-85 points.

10. Jason Spezza, Ottawa Senators (13): For the first few months of last season, SPezza looked like a shell of his former self. After coming back from a January injury, he stormed back at better than a point per game. Hopefully, he found his groove after an entire season without Heatley, as the Senators will rely heavily on him.

11. Jonathan Toews, Chicago Blackhawks (17): Toews had ups and downs last season, but during his Conn Smythe performance he showed extraordinary consistency when the stakes were high. While he probably won’t break 100 points, there are plenty of reasons to think that the young Chicago captain can hit new point total highs this season.

12. Anze Kopitar, Los Angeles Kings (16): Kopitar led the league in scoring for a brief time during the Kings’ early surge, but he couldn’t keep it up. Consistency and a scoring winger are preventing him from truly reaching his potential. While the wing situation won’t be fixed soon, some consistency might make Kopitar an 85-point guy.

13. Jeff Carter, Philadelphia Flyers (10): Carter dropped from 46 goals to 33, but could have easily hit 35-to-37 if he had remained healthy. Forty-five goals may be difficult, but he should be a lock for 35-to-40 assuming he doesn’t bounce around positionally again.

14. Patrick Marleau, San Jose Sharks (14): Depending on the Fantasy league, Marleau might be assigned to centre or wing (or both) and that flexibility can mean a lot based on your league’s rules. Marleau plays in all situations and gets both PP and shorthanded goals.

15. Marc Savard, Boston Bruins (6): Last season, it seemed like all the Bruin wingers slumped or got hurt. Some of them should bounce back, and that will only help a playmaker like Savard. Health wil be a major concern, as concussions always loom over a player that’s missed significant time.

16. Mike Richards, Philadelphia Flyers (9): Twenty-eight, 30, 31 goals…Richards is steady, despite an overall drop in points last season. When you draft him, you’re getting a minimum of 30 goals and 70 points. Depending on how things go, Richards could add another 15 points on top of that.

17. Paul Stastny, Colorado Avalanche (23): Year two of the post-Joe Sakic era has arrived, and that means the young Avs have another season to mature. As a result, Stastny should build on last season’s total of 79 points.

18. Brad Richards, Dallas Stars (NR): His 91-point campaign was nearly identical to his 2005-06 91-point season. Outside of that, he’s usually been just a hair under a point per game. When you factor in Richards’s career history and his age, it would make sense for him to return to 75-to-85 point territory, especially with the Dallas Stars in transition.

19. Vincent Lecavalier, Tampa Bay Lightning (15): If Lecavalier clicks with Simon Gagne, a return to 90 points isn’t out of the question. He still got 70 points in an off season with inconsistent linemates and is a threat on both special teams. New coach Guy Boucher wants to emphasize transition more than the previous Tampa regime and that should work well with Lecavalier.

20. John Tavares, New York Islanders (NR): Is it too early to consider Tavares this high? There’s certainly no reason to guarantee a Stamkos-esque sophomore campaign, but Tavares has enough raw talent for it to be possible. Plus he comes with a much higher upside.

21. Mikko Koivu, Minnesota Wild (22): With a new big contract, Koivu will be a Wild for life. He’s just hitting his prime and could push all-new point totals. However, if you look at his history, his points-per-game has increased from year to year. Can Koivu hit 80 points? It’ll certainly easier under coach Todd Richards, but it might be a stretch to claim 80 points.

22. Phil Kessel, Toronto Maple Leafs (15 at RW): The Toronto media has been on Brian Burke for giving up so much to get Kessel, but think about it: 30 goals in 70 games despite late start on a new team is pretty darn good. A full training camp and good health could mean 35-to-40 goals, though lack of scoring depth in Toronto hurts.

23. Daniel Briere, Philadelphia Flyers (NR): Briere has never hit a point-per-game with Philadelphia, but he’s still good for at least 65+ points. The Flyers shuffled the deck by getting rid of Gagne, and it remains to be seen whether this restructuring of the forward unit could help or hurt Briere. Having said that, he’s trimmed down and that should translate into some serious speed.

24. Ryan Kesler, Vancouver Canucks (NR): Not only is Kesler a video game cover boy, he hit all-new point totals last season. Seven-five points, though, should be his max and it’s difficult to see Kesler hitting 80 points. There may be an increase in power play points, though, thanks to Vancouver’s now-loaded blueline.

25. Travis Zajac, New Jersey Devils (21): At 25, Zajac is ready to bust past the 70-point barrier. In the past three seasons, his goals went from 14 to 20 to 25, and the Devils will certainly be relying on him for more offense. Thirty goals is possible.

By Mike Chen
Tags: Fantasy Hockey, Henrik Sedin, Mike Comrie, NHL, Pittsburgh Penguins, Vancouver Canucks
This entry was posted on Saturday, September 4th, 2010 at 2:32 pm and is filed under 2010-11 RotoRob NHL Draft Kit, Cheat sheets, HOCKEY, Mike Chen. You can follow any responses to this entry through the RSS 2.0 feed. Both comments and pings are currently closed.