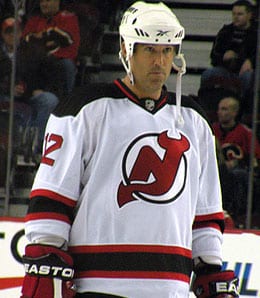 Brian Rolston could still be useful despite being waived by the Devils.

Christmas is less than two weeks away. So did you ask Santa for help with your Fantasy hockey teams this year? Well, hopefully you did. Even if you did not, we will still revel in the spirit of giving. The time has come to do our own glorified version of dumpster diving.

This week will be the same as last week, with our three picks and maybe something extra at the end for those that read down to the very bottom. There can be a level of ecstasy and joy from snagging a player that was coveted on other teams, but you were the fast one on the trigger.

Remember, holiday roster freezes are coming in the NHL, so if you have players that may be on the move, Christmas week they are safe so who may be under the Christmas Tree to snatch up before others do? Well, we will give you an idea of what to do.

Brian Rolston, C, New Jersey Devils: Well, Rolston was put on waivers and has only four points in 15 games. He is also a -6 and a player that really had no prayer this year in New Jersey. Someone had to be the first cap casualty and sadly it is Rolston. He is likely to clear waivers but if he is put on re-entry waivers, it is widely believed someone will snatch him up. Look, Rolston is not a bad player. He just does not fit what the Devils are trying to do. The reality is there was never a line suited for Rolston’s talents at all. Talk about a buy low situation that could pay off considering he is owned in 10-to-20 per cent of Fantasy leagues and in some cases, less. Snatch him before your roster freezes (if it does) or snatch and stash if you have an extra roster spot available.

Marc-Andre Bergeron, D, Free Agent: MAB is still waiting for a team, but it appears that some are knocking on the door. He is fully recovered from his knee surgery and although he is not all that good defensively, he is good offensively on the man advantage. This has some drooling in organizations from St. Louis to New Jersey and even in Anaheim as well. Bergeron is that type of player that can ignite a team from the back end and if you pair him with a solid defensive defenseman, he can pay off dividends quickly. St. Louis is believed to be the frontrunner here and if he is on waiver wires now, I would not wait to snag him. As I am typing this, people are already running to get Bergeron.

Evgeni Nabokov, G , Free Agent: Another player that no one signed in the offseason. However, Nabokov was healthy and just wanted to get paid what he felt he was worth. He is a very elite level talent for Fantasy owners and, let’s be honest, the regular season has been very kind to him. The postseason does not matter for Fantasy purposes. Goalies that can pile up wins and consistent numbers are hard to find and literally just the fact that Nabokov is coming back to North America means you have little time to claim him. By the end of the week, his ownership numbers will skyrocket above 50 per cent.

Well, that is all for now. We come back over the weekend for our usual slot and a little more Wishlist. Hang in there in your Fantasy leagues and do not hesitate to ask any questions. See you Sunday.

By Chris Wassel
This entry was posted on Thursday, December 16th, 2010 at 8:15 pm and is filed under Chris Wassel, HOCKEY, The Wire Troll. You can follow any responses to this entry through the RSS 2.0 feed. You can leave a response, or trackback from your own site.