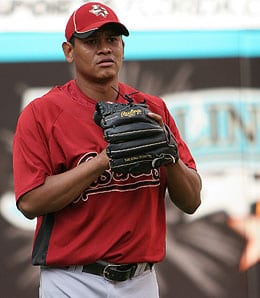 Wilton Lopez is a few blown saves away from having serious value.

The 2011 RotoRob MLB Draft Kit continues today with another list of players you need o have on your radar. So while you wait to see if Barry Bonds will have to pay the piper for allegedly lying to a grand jury, here are a half dozen names to consider when filling out the back end of your Fantasy baseball team’s roster.

Each and every year there are always players that jump into Fantasy prominence and the 2011 season will be no different. In the chase for the next Colby Lewis or Chris Perez here are six players that should be filed away for future reference. When assessing late-round gambles and players to fill in your bench slots keep these names handy as they all have the potential to be assets on the long road ahead.

Wilton Lopez, RP, Houston Astros: Why chase saves off the waiver wire halfway through the season when it’s just as easy to bury a closer-in-waiting on your bench and wait for the inevitable. With that in mind, does anyone truly believe that Brandon Lyon is the long-term or quite possibly even the short-term answer in the Houston bullpen? Lyon’s high walk and low K rates don’t fill me with confidence. Has he ever had a full year worth of saves in a closing capacity? Enter Lopez. In 67 IP last year, he allowed 66 hits and only five free passes, yes that would be five walks, while fanning 50 and posting a great 2.96 ERA and 1.06 WHIP. In six IP this spring, Lopez has yet to allow a hit or walk with three strikeouts and he looks like he’d be in the driver’s seat should Lyon falter — which is inevitable, isn’t it?

Bobby Parnell, RP, New York Mets: The Mets have anointed the 26-year-old right-hander as a setup man in the Big Apple. The Mets are going to do everything in their power to ensure that Francisco Rodriguez’s $17.5-million option does not kick in, which could be more good news for Parnell, both this year and in 2012. Parnell should definitely be on the radar. In 35 innings last year, he managed 33 strikeouts against just eight walks in compiling a 2.83 ERA. In seven innings this spring, Parnell has racked up six strikeouts while working on a slider to complement his mid-90s heat. A lot can happen in the next two-to-three months and owning Parnell early in 2011 — in what will likely be K-Rod’s final year in New York — could turn into a very solid move.

Michael Kirkman, SP/RP, Texas Rangers: The general state of confusion with the pitching scenario in Texas — mainly involving the status of Neftali Feliz — has left myriad options that could ultimately be arrived at over the next week. One player that shouldn’t be forgotten in the confusion is 24-year-old southpaw Michael Kirkman. The Pacific League’s 2010 Pitcher of the Year enjoyed a stellar campaign at Triple-A Oklahoma City, going 13-3 over 22 starts while allowing 114 hits and 68 walks with 130 strikeouts in 131 IP. Whether he’s starting or relieving, the strikeout per inning potential has got my attention, and it should have yours as well.

Yunesky Maya, SP, Washington Nationals: In September 2009, Maya fled Cuba and last July he signed with the Washington Nationals. Rushed to the bigs, Maya posted anything but an inspiring line. In 26 IP, he allowed 30 hits and 11 walks while striking out only 12 in putting together a 5.88 ERA and 1.58 WHIP. Given that he pitched just 21 1/3 IP in the minors before his September audition and the fact that he hadn’t pitched in over a year might be the key contributors to that rather inauspicious start. The Dominican Winter League results tell a bit of a different story for the 29-year-old right-hander. Maya went 4-2 with a 1.32 ERA in 41 IP, allowing a scant 27 hits and nine walks while fanning 42. These results are much more in line with his record in Cuba — in his final season before defecting, Maya went 13-4 with a seven complete games and a 2.22 ERA while whiffing 119, good for second place behind some dude named Aroldis Chapman. Those results earned Maya the Best Pitcher Award for the 2008/2009 season. There is a distinct possibility that he starts the year in Triple-A, but expect him to get the first call in Washington — something that probably isn’t that far down the road.

Robinson Chirinos, C, Tampa Bay Rays: Chirinos was part of the package the Rays received in the off-season deal that sent Matt Garza to the Cubs. He slugged 15 homers and drove in 64 runs in Double-A last season and didn’t skip a beat when promoted to Triple-A Iowa. As a matter of fact he raked Triple-A pitching to the tune of a .364 BA with three homers and 10 RBI in 55 at-bats. The Rays didn’t trade Garza for this kid just for kicks. Monitor the situation in Tampa very closely this spring as given that he’s hitting .429 with two homers and eight RBI this spring, Chirinos looks very ready to contribute at the major league level — at least with the stick. Kelly Shoppach, who slated to be John Jaso’s backup, is currently enjoying a decent spring, but the Rays aren’t going to exercise much patience with a capable replacement chomping at the bit.

Wei-Ying Chen, SP, Chunichi Dragons: How can we be talking about players that aren’t even in North America, you ask? Dynasty leagues are gaining in popularity and in that format this 25-year-old Taiwanese National should be coveted. Now that his status as a foreign versus domestic player has been resolved, there’s absolutely no doubt that he’s headed to this side of the Pacific Ocean next year. In 2009 he amassed an incredible 1.54 ERA — one of the strongest results in the history of the NPB — while allowing just 113 hits and 40 walks in 164 IP with 146 strikeouts. He followed up that incredible performance by winning 13 games last year with a 2.87 ERA — good for a second place in the Central League. For those playing in dynasty formats get the jump on your league mates and get Chen rostered sooner rather than later.

By Tim McLeod
This entry was posted on Tuesday, March 22nd, 2011 at 10:21 am and is filed under 2011 RotoRob MLB Draft Kit, BASEBALL, Sleepers, Tim McLeod. You can follow any responses to this entry through the RSS 2.0 feed. You can skip to the end and leave a response. Pinging is currently not allowed.