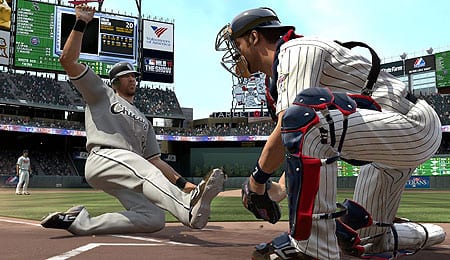 If there’s one thing Adam Dunn is not, it’s fast.

For baseball fans, there is no sweeter phrase in the English language than “pitchers and catchers report.” And for those of us that love the virtual representation of the sport, the arrival of Spring Training means it’s time for another season of baseball video games headlined by Sony’s MLB ’11: The Show. The reigning champ may look and sound eerily similar to last year’s version, but there have been some significant changes made that keep this from feeling like little more than a pricey roster update.

Perhaps the biggest addition to this year’s game is the pure analog control system, which allows you to control all three facets (hitting, pitching, defense) using the right and left analog sticks. Unlike 2k’s baseball franchise, The Show focuses more on timing than creating specific gestures with the stick, making it easy to grasp but surprisingly tricky to get the hang of.

On the mound you push the right stick down to start your delivery then move it up when you reach the sweet spot — it’s similar to the meter in that if you over or undershoot it you’ll fire a less effective pitch. Angling the stick right or left on the upward motion allows you to locate your pitch. At the plate pushing down has your batter lift and plant his drive leg. Then you push up to start your swing. The trick is timing it so you not only make solid contact with the ball but also so that said contact occurs when your hitters’ weight is shifting.

For those that want to stay with the traditional approach, the pitching meter and button swinging methods return as well. I strongly suggest giving the analog system a long look, however, as it really adds to the challenge and provides another layer of tactical depth. A couple of other new additions (faking a throw to a base and balks) help The Show continue to blur the line between video game baseball and the real thing.

Visually, Sony San Diego seems to be largely treading water. Player models are a bit tighter and more realistic contextually to one another, but I didn’t notice that much difference between how things looked one game to the next from last year to this. There are some subtle improvements, though, including more authentic replays as well as better in-game lighting, which recreates the different looks of day and night tilts brilliantly. Weather elements (such as rain and cloud cover) have also been added and are crisply presented.

The game does offer up some new bells and whistles in the form of a camera editor, which lets you customize the pitching and batting cameras. One of the coolest aspects of this feature is that each team’s real life broadcast views have been included — if you’re used to watching the Red Sox on NESN you can play your games using the angle/zoom you’re accustomed to seeing on TV. As someone that annually invests in the MLB Extra Innings package it was quite a hit to see.

Not everything is as smooth as you’d like in a finished product, however, as I have seen a number of strange graphical glitches. Among the most glaring is a contrast change between the first and second pitches of an at-bat during certain times of day as the screen gets noticeably brighter. Other less frequent issues include the home plate umpire facing the wrong way and batting practice sessions thrown by a side-armed hurler where each pitch hits the screen.

On commentary, the tandem of Matt Vasgersian and Dave Campbell return and are joined this year by Eric Karros (replacing Rex Hudler). Despite a new voice, commentary remains the presentation element in most dire need of an overhaul, particularly in Road to the Show. Vasgersian’s quips about borderline pitches and Campbell’s early analysis of your performance repeat ad nauseum. Plus, it’s abundantly clear that all dialogue was recorded separately and then pieced together. There’s just no flow.

Ambient sound is good, mixing in the noises of the game with the crowd’s reactions. There does seem to be an excessive amount of arbitrary booing, though, with borderline pitches in the home team’s favour still drawing the crowd’s ire for some reason.

While peripheral improvements are important, sports titles are ultimately judged on what happens once the game begins, and MLB ’11: The Show remains an amazingly deep and accurate recreation of America’s pastime. Beyond the implementation of analog controls, the pitcher/batter showdown is similar to previous years, but fielding has gotten a notable upgrade.

This time, fielding ratings have been given much more weight so that playing shortstop as Troy Tulowitzki feels different than Yuniesky Betancourt. Tulo reacts almost instantly once the ball is hit, and as a result he gets to more balls than Betancourt, who has about as much range on the diamond as Keanu Reeves has on the silver screen. Making defensive players control differently forces you to think twice about stacking your lineup with mashers at the expense of competent fielding. In other years it didn’t matter much. This year, you’ll pay for it.

As with previous versions, your hours figure to be spent in one of two places: Franchise and Road to the Show (RttS). Starting with Franchise mode, series vets will undoubtedly feel right at home as not much has changed here. Improved trade A.I. is in place and offers up fewer head scratchers than in past years, but there still seems to be a lack of deadline deals or the type of salary dumps where pending free agents are moved for low-level prospects that often permeate late July.

Simulating seasons generally produces realistic numbers for players, which is good for those that mostly play it for the GM responsibilities. Unfortunately, the game hits a snag a couple years in when practically every big name player hits free agency simultaneously because younger players have progressed and provide cheaper alternatives for teams — this leaves All-Star caliber talent to sit unsigned in many cases. According to Sony, a patch is in the works.

Even with that issue and minimal tinkering, Franchise Mode remains one of the top offerings of its kind in any sports game. It covers the basics and the minutia (such as arbitration and the Rule 5 draft) better than most and still provides for many hours of simming bliss.

Conversely, Road to the Show has seen some improvements. First up is the addition of sliders when creating your player, allowing you to shade their initial skill set toward a particular type such as power versus control on the bump. However, know that when I say shade, I do mean shade, as your starting skills will still be low across the board no matter what you do with the sliders.

As with Fight Night Champion, I understand the reasoning at a conceptual level, but it doesn’t make sense when it comes to certain attributes. You don’t learn to be fast just like you don’t learn to throw hard. Sure, proper coaching allows fast players to become more adept base stealers just as mechanics can help pitchers add velocity. The raw ability is there from the get go, though.

Developing your player has also changed a bit as now experience points are rewarded based as much on your approach as the result. For instance, a 10-pitch at-bat that ends in a fly out to left will net you more training points than a weak Texas leaguer that finds a vacant spot in the outfield. It’s a better system that rewards patience and situational understanding instead of being purely results driven. As part of the new approach, secondary goals like “get ahead in the count” have been removed.

There is also a new set of training activities that do a much better job of stressing fundamentals while actually teaching you how to improve your in-game skills. For me, the baserunning drills were invaluable as early on I would overrun a base or routinely get picked off. After a couple training sessions, not only were my related attributes better, so was I.

Managerial A.I. in RttS remains a sticking point with me as it still happens to often that the game doesn’t use my created player in a realistic fashion such as being left in far too long or used too many days in a row as a pitcher. Interactions sometimes make little sense as well. As an 18-year-old prospect on a 10-game hitting streak I asked for more playing time but was shot down because the 24-year-old player ahead of me on the depth chart was hitting a cool .237. The puzzling A.I. combined with lengthy load times serve as flies in RttS’ ointment.

In a sport as reliant on pinpoint timing as baseball it’s always going to be a struggle for online play to match offline, and once again that appears to be the case. The timing you’ve spent perfecting against the computer doesn’t seem to translate, making the whole experience just a bit off. Truth be told, I’ve always preferred to play baseball solo, so others may find online performance and new offerings like the Challenge of the Week more enticing than I do.

While some may decry the lack of new features, the addition of pure analog control helps MLB ’11: The Show feel fresh. It’s not a perfect game, but its place on the Mt. Rushmore of sports titles remains secure. Well played, Mauer.

By Herija Green
This entry was posted on Monday, March 21st, 2011 at 11:09 am and is filed under BASEBALL, Herija Green, Video Game Reviews. You can follow any responses to this entry through the RSS 2.0 feed. You can skip to the end and leave a response. Pinging is currently not allowed.