Podcast: Is Andy Pettitte a Hall of Famer? 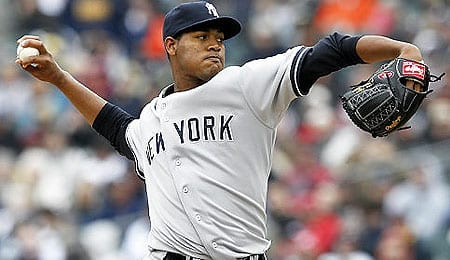 Ivan Nova will be thrust into a more prominent role with the retirement of Andy Pettitte.

On Sunday, Tony Cincotta, Rich Wilson and yours truly gathered on the radio to review the current happenings in the world of baseball on the FantasyPros 911 show on Blogtalk Radio. Who wouldn’t want to talk some baseball after just enduring one of the worst half-time performances in the history of the Super Bowl? Oh for the good old days, when even a simple wardrobe malfunction would have been at least some improvement over this year’s drudgery.

We got the ball rolling with a quick discussion on the recent retirement of Andy Pettitte. Are his 240 victories, 2251 strikeouts, and the amazing post-season success enough to make him a Hall of Famer? More importantly, what now do the Yankees have to look forward to in the form of a starting rotation entering the 2011 campaign? Can Ivan Nova be the answer to your Fantasy starting pitching questions this season?

As we head into another season, it’s time to look at some of our early prognostications. What players have the potential to move into the first round looking to 2012? What players have the best odds of moving out of that top tier? We then reviewed some players that we believe have the potential to return solid profits based on their current triple-digit ADP. Is 2011 the last opportunity for Fantasy players to acquire Mike Stanton as a relative bargain? Is Miguel Montero capable of breaking into the Top five among catchers this year? So many questions remain to be answered, but with Spring Training and league drafts fast approaching getting that early read on the who, what, why and when can lead to some great opportunities.

It was then time to go for those deeper off-the-radar type sleepers and how could I not take a few minutes to extol the virtues of Yunesky Maya? Does the Cuban ex-pat have the potential to be this year’s surprise sleeper in Washington? A rather lengthy discussion ensued on one Lorenzo Cain of the Kansas City Royals. Do we believe in his upside as a late-round sleeper? You know you play in deep leagues when Wilton Lopez and Bobby Parnell are on the radar, but they really should be.

Savour our show by clicking on the play button below. It’s guaranteed to ease the heartburn caused by too many black eyed peas. [Editor’s note: Tim is so old he uses carbon-dating to determine his age, hence his musical taste does not extend to anything beyond 1982.]

By Tim McLeod
This entry was posted on Tuesday, February 8th, 2011 at 1:11 am and is filed under BASEBALL, Podcast, Tim McLeod. You can follow any responses to this entry through the RSS 2.0 feed. You can leave a response, or trackback from your own site.