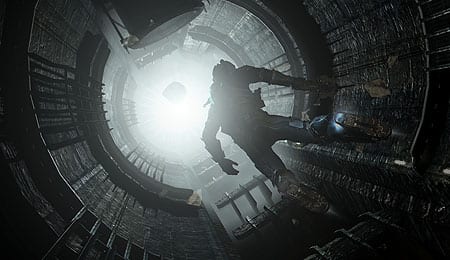 Don’t worry, Isaac still kicks all kinds of ass even in Zero G.

Let’s just get this out of the way. I loved the original Dead Space. The atmosphere, the pacing, the legitimate tension it created and so much more. About the only things I didn’t like were the ADS cannon sequence and the perpetual backtracking that you did throughout the game. Thankfully, that element has been almost completely eliminated with developer Visceral Games unleashing a more linear and action-packed adventure — if Dead Space was Alien, then Dead Space 2 is Aliens.

As far as I can tell, the control scheme hasn’t changed from the original to the sequel one iota. Most buttons and triggers have one function when walking normally and another when holding down the left trigger to aim your weapon. The only time this becomes an issue is with the “B” button, which utilizes telekinesis when you’re aiming and has you use a health pack when you’re not. I’m sure I’m not alone in having accidentally used med packs when I didn’t intend to because of it.

Arguably the biggest drawback with the setup is an omission as there is still no way to do a true quick 180-degree turn, which would be highly beneficial in a game that has enemies appearing from air ducts and floor panels in all directions. Rotating the camera to show behind you and then taking aim is a makeshift way to execute the maneuver, but it’s not a substitute for a dedicated action.

If you were to put me on the spot and ask me to rattle off a half-dozen games that are visually superior to Dead Space 2, I’d be hard pressed to come up with half that amount. Put simply, Dead Space 2 is an amazing-looking game. The backgrounds are more varied than from the original thanks to a larger setting, which gave the development team the opportunity to throw all kinds of disturbing imagery your way — an opportunity they rarely allowed to pass by.

The game does a phenomenal job of playing with the lighting, ensuring that you’re constantly checking corners and doorways with your flashlight to make sure nothing is lurking. In some sections the lights will flicker on and off as you move through them, keeping you illuminated while making it difficult to see around you. It’s so well done that you can’t help but be drawn in, to the point where you’ll be happy when finally reaching well-lit areas.

Beyond the amazing locales, Dead Space 2 also pushes the gore envelope. Necromorphs are still beaten by severing limbs and turning their already twisted forms into quivering piles of eviscerated flesh. Your own disembowelments may not happen with as much frequency, but are still gruesomely bloody to witness.

As consistently excellent as the graphics are you could make a strong case that they take a backseat to the audio when it comes to creating the game’s palpable tension. The moans and creeks of the space station itself are unnerving, though they pale in comparison to the shrieks of Necromorphs, each of which has their own signature howl. Add to that a selectively understated score that shrinks and swells at all the right times and you’ve got something special. This was meant to be played in surround sound with the volume turned way up. It’s immersive gaming at its best.

Protagonist Isaac Clarke, the strong silent type in the first game, has plenty to say this time around as the game’s most compelling storyline is the one within his own head. While not as strong as the other aural elements the voice acting is still good. Whether it’s Clarke, one of the other characters or a stray audio log, there’s nothing here that’s going to take you out of the experience.

Picking up three years after the events of the original, Dead Space 2 opens with a disoriented Isaac being awoken from some sort of stasis. Without so much as a moment to get his bearings, Isaac finds himself surrounded by the nightmarish Necromorphs and must immediately make a run for his life. It’d be an understatement to say this game wastes no time in throwing you into danger.

Once things start to come into focus you realize you’re now on the Sprawl, a massive space station that has been doing some clandestine research surrounding the marker (a religious idol that was the source of all the trouble aboard the USG Ishimura). While how you came to be there and what role you may or may not have played in what’s happening on the station are unclear, one thing is for certain — you are slowly losing your already tenuous grip on reality.

Haunted by the death of his girlfriend, Nicole Brennan, as well as the events that unfolded on the Ishimura, the Isaac Clarke that is battling Necromorphs on the Sprawl is not the same man that came to the Ishimura to make repairs. Instead, we find a battle hardened yet weary soul whose inner turmoil serves as the most compelling aspect of Dead Space 2’s story. It’s an interesting road to go down and one that feels fresh amid a sea of largely interchangeable survival horror plots.

Conversely, the main story never comes together as well. Throughout the vast majority of the game you’re trying to rendezvous with different characters, none of whom you have any viable connection to whatsoever. Given all the strong elements at work in Dead Space 2, the way Isaac, who is the only person with any experience dealing with Necromorphs, is constantly being told where to go and what to do seemed flimsy at best.

Another blow is the lack of interesting secondary characters. Whether it was Tiedemann, the director of Titan Station, Ellie, your pseudo romantic interest, or Stross, another person driven to madness by the marker, I had zero emotional attachment to them and didn’t understand why Isaac did, either.

However, the need for an engaging plot isn’t as strong when your primary focus is action, and therein lays the single biggest difference between EA’s original survival horror foray and this one. Dead Space 2 is all-out, balls-to-the-wall action nearly from start to finish. To maintain that pace EA has embraced a far more linear approach as your path rarely branches out, guiding you ever forward in pursuit of the next objective.

Along the way you’ll encounter several different Necromorphs, each with their own strengths and weaknesses. All of whom are begging to be shredded to pieces by your expanding arsenal of guns. Most of your munitions are carried forward from the original Dead Space, but there are a few new goodies such as the Detonator, which fires trip mines. Weapons, suits and your stasis module can all be upgraded by collecting power nodes, allowing you to trick out your most used items. It was a great system the first time around and that hasn’t changed. You’ll need multiple playthroughs to max out everything and as you start new games you unlock better suits so there’s a decent amount of replay value on a title that’ll run you north of 10 hours to complete initially.

Now, while I’m sure some gamers are going to balk at the phrase “linear gameplay,” don’t let that dissuade you. For nearly the entirety of the game’s 15 chapters, things are expertly paced. I say nearly because I felt the final two were a bit disappointing, most notably because of the introduction of an indestructible stalker (think Nemesis from Resident Evil 3) that seemingly encourages you to rush through sections rather than killing Necromorphs. Add to that the lack of boss fights that really stood out in Dead Space and there are a couple of late missteps.

In addition to a lengthy single-player campaign, Dead Space 2 also comes packed with multiplayer as gamers are split into two teams: humans and Necromorphs. It’s a concept I enjoyed in last year’s Singularity, but it doesn’t measure up here. There’s no real depth to the experience and playing as one of the Necromorphs generally devolves into charging a human, mashing buttons, dying and then coming back for more. Those that invest the time will unlock new stuff as they level up, though I doubt this title will have much staying power online.

To borrow a phrase from Epic Games’ Cliff Bleszinski, Dead Space 2 is bigger, better and more badass than the original. Don’t let a suspect multiplayer and linear gameplay tag prevent you from playing this as the combination of atmosphere and edge-of-your-seat intensity makes for a special title.

By Herija Green
This entry was posted on Tuesday, February 8th, 2011 at 6:35 pm and is filed under Herija Green, Video Game Reviews. You can follow any responses to this entry through the RSS 2.0 feed. You can skip to the end and leave a response. Pinging is currently not allowed.