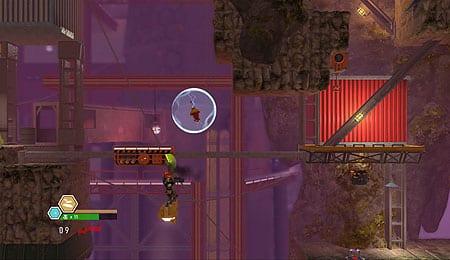 The original Bionic Commando appeared on the NES back in 1988, and since then, fans have wondered why a true sequel was never created for this fondly remembered game. Bionic Commando Rearmed was pretty much an HD upgrade with a few new things thrown in, while 2009’s Bionic Commando was met with bad reviews and poor sales.

Veteran Bionic Commando players — of either the NES or Rearmed versions — will fondly recall a two-button control scheme, one button to use the bionic arm and the other to shoot. Well, Nathan “Rad” Spencer has finally discovered how to lift his legs more than six inches and he can jump now. That’s right, there’s a jump button, and if you’ve played either previous version, you’ll find yourself accidentally hitting the jump button when you want to claw.

This instinct goes away after a little bit, and you’ll eventually find a rhythm between jumping and clawing. Outside of that, trigger buttons cycle through your primary weapons, and a secondary weapon is assigned to a face button. Rearmed 2 also adds in a new data-gathering feature, which pauses the game and lets you glean info about certain highlighted objects. This isn’t too helpful, but does essentially eliminate any in-game tutorial and offers a few (somewhat obvious) hints about fighting bosses.

There have been slight tweaks to the swinging mechanism timing; in fact, it feels like there is a slight delay in responsiveness for certain actions involving the bionic arm. This can be frustrating considering how crisp the first Rearmed was, and it certainly detracts from the gameplay when maneuvering a swing-intensive area.

Rearmed 2 looks and sounds a lot like the first Rearmed, which means that you’ve got 3D models in a 2D environment, along with a modernized electronic score that has an 8-bit feel. The colours and environments are bright, with some lush backgrounds and impressive events, such as background structures exploding with debris flying into the screen.

The graphics are clean and pop off the screen, but never lose the context of what this is — an 8-bit platform game in an HD world. They won’t win any awards, and the game could have been easily been done in the Playstation 2/XBox generation, but that doesn’t mean that they’re any less fitting.

One puzzling issue: The game takes place a few years after the original, and in order to give Spencer the appearance of having aged, they’ve slapped a porn-star mustache on him.

Rearmed 2’s plot tells of a South American dictator up to no good; with Spencer’s team of Bionics separated while infiltrating the area, it’s up to our hero to swing/jump/shoot his way through and save the day. The new control and weapon schemes bring both good and bad elements. First, the bionic arm has seemingly lost the ability to simply reach across horizontally. The only way you can fire it straight across is if you’re ducking. This may have been some kind of design tradeoff for adding a jump mechanic, but it seems rather ridiculous.

On the other hand, once you get used to the jumping, it frees up the gameplay a lot. One of the most frustrating and ludicrous parts of the original game was the fact that a small barrel stopped a bionic warrior. Now Spencer can jump or climb over it, and this mechanic has also made falling more forgiving, as Spencer will cling on to close edges and climb over them. So it takes care of the simple stumbling blocks, but for more advanced players, a jump opens up a new way of utilizing the bionic arm, putting new paths within reach. In some cases, though, this new feature seems to dumb down some of the level design.

As for the weapons, it’s nice to have a wider selection of primary and secondary weapons from the previous game. However, there’s no real need to use them all that often. When you die and respawn, you default to your main cannon, and even if you forget to switch over to a different, supposedly more powerful gun, you’ll still be able to get through. In fact, I found myself preferring to use the default gun even in boss fights simply because of the speed and range of it.

The basic gameplay hasn’t changed — swing through the level to get to the goal while killing bad guys along the way. The bad guys, however, haven’t really changed all that much from the last game. They consist of various uniformed “Dudes With Guns” and various painted “Mini-Tanks With Guns.” Okay, that’s being a little cynical, as there are a few more types of enemies, but not many. Also, unlike the first game where just about every level had some form of boss or target to blow up, some levels in Rearmed 2 simply end once you get to a certain point. The non-linear fashion of choosing levels from the first game has disappeared, and instead you’re essentially going from level A to B to C. Thankfully, the annoying overhead shooter levels have disappeared.

Co-op play is available, and this adds a new dynamic to solving some puzzles across the levels. For example, some areas can’t be accessed until two triggers are handled, and in co-op, this obviously can be finished in parallel. The Challenge Rooms from the first Rearmed are also back, along with the popular online leaderboard.

For gamers that have awaited a true Bionic Commando sequel since the NES days, your dream has arrived. Though the overall tone of the narrative is a mix of self-mocking goofiness and over-the-top machismo, the actual gameplay feels like an evolution from the original Bionic Commando model. This game could have essentially been recreated as a 16-bit Bionic Commando 2 back in the mid-1990s and fans would have been happy. Despite some minor design flaws, that’s probably the biggest compliment you could give the developers.

By Mike Chen
This entry was posted on Monday, February 7th, 2011 at 11:20 am and is filed under Mike Chen, Video Game Reviews. You can follow any responses to this entry through the RSS 2.0 feed. You can skip to the end and leave a response. Pinging is currently not allowed.