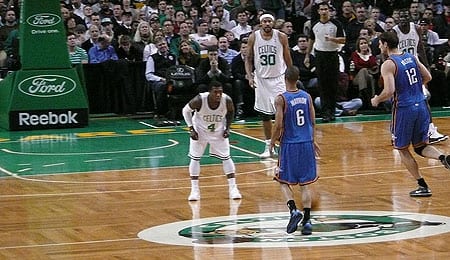 The Boston Celtics looked like crap in the second quarter on Tuesday night, getting outscored by the lowly Sacramento Kings 34-18 to trail 54-45 at the half. And it was Ray Allen of all people that lost hit shit in the locker room, tearing everyone a new asshole for the lacklustre effort. His tirade worked, as Boston dominated the second half, outscoring the Kings 50-36 for a 95-90 win, its second straight victory.

More importantly, thanks to a successful 3-1 Western road trip, the Celtics are assured of having the best record in the East as of February 6, and that means Doc Rivers gets to coach the Eastern Conference All-Stars later this month.

The Celtics are now headed back home, and have a few days off before starting a tough two-game homestand Friday against the Mavericks followed by a Sunday afternoon affair against the Magic.

Allen, meanwhile, put his money where his mouth is, nailing 9-of-15 from the field, including four treys, for 22 points with six boards to help seal the deal. Allen’s final three-pointer was huge, giving the Celtics a six-point lead with just seven minutes to play.

Jesus had a hell of a road trip for Boston, the game in Phoenix notwithstanding. In his last two games in particular, Allen has been lights out, sinking 17-of-27 from the field with seven 3-pointers. His workload was reduced a bit in January, and it seems to have worked wonders as Allen’s shooting was phenomenal, draining 54.5 per cent from the field and 51.8 per cent from beyond the arc. He supplied his owners with 17.9 PPG and 2.7 threes a game in January – both season bests. And while his minutes were up Tuesday (almost 37), he remained white hot with his touch.

Rajon Rondo was also instrumental in the win, recording his second straight double-double with 17 points and 10 assists while nabbing four steals for good measure. Rondo’s thievery hasn’t only helped the Celts to the best mark in the East, but they’re also helping the community. It’s always nice to hear about athletes doing something good with their money. Kudos to Rondo.

Rondo didn’t have a great January, managing just 9.6 PPG as his FG percentage dipped and his torrid early-season assist rate also slowed, but with 4.5 boards and 2.5 steals per game, he continued to provide excellent value for his owners. Hell, the little guy even stuck up for Kevin Garnett in Tuesday’s rough affair, pushing DeMarcus Cousins in the chest after the rookie was towering over a prone KG, who had just dove for a loose ball. That’s the kind of fire that could drive the defending Eastern Conference Champion Celtics back to the NBA Finals this season. The core of this team has been together since 2007 now, and that chemistry will stead it well come playoff time.

Meanwhile, Rondo’s backup, Nate Robinson — a player that had some nice waiver wire value before Christmas when Rondo was out — was putting on a robbery display of his own, earning a career-high tying five steals in 22 minutes, the most action he’s seen in a few games. It’s the fourth time Robinson has racked up five thefts in a game. Little Nate has long since ceded any value in standard-sized leagues, but his periodic exploits and ability to produce numbers in very few minutes (on Sunday he scored 11 points and hit three treys in less than 14 minutes) makes him worthy of deep leaguer’s attention. However, given that he only played 15 MPG in January, Robinson’s nice lines were very scattered. Obviously any injury in the Boston backcourt will immediately propel him back into a Fantasy commodity, but for now, you can just tuck him into your memory vault.

Garnett enjoyed a decent road trip, but he wasn’t very effective Tuesday, shooting just 3-of-10 from the field for 12 points, seven boards, two assists, one steal and three turnovers. He somewhat salvaged the line by nailing all six of his freebies and blocking a couple of shots, but this was hardly vintage KG. Still, owners have to be pretty happy with his recent play as he managed 15.5 PPG in January. Overall, The Big Ticket is playing more minutes this season, getting a few more touches and has upped his scoring to 15 points per night after averaging less than that last season for the first time since he was a rookie way back in the day.

By RotoRob
This entry was posted on Wednesday, February 2nd, 2011 at 5:43 pm and is filed under BASKETBALL, NBA Today, RotoRob. You can follow any responses to this entry through the RSS 2.0 feed. You can leave a response, or trackback from your own site.