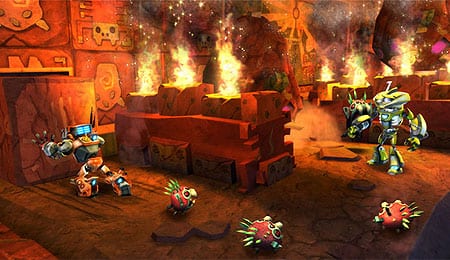 During actual gameplay the camera is rarely this effective.

Gaming’s history is rife with memorable co-operative experiences from simple 8-bit shooters (a la Contra and Rush N’ Attack) to full-fledged adventures (Ratchet & Clank). To that proud tradition, developer EA Bright Light tries to add Mar-T and Chip, the robotic protagonists for the recently released Spare Parts. In a cruel twist of fate, however, a game built around co-operative play is actually more enjoyable when you’re going it alone.

Although the basics are instantly familiar — jump with “A” (tap twice to do a double jump) and use your weak (X) and strong attacks (Y) to defeat enemies — there are quite a few problems here. For starters, jumping can feel imprecise and occasionally non-responsive. Using your special abilities (B button) seems finicky at times, most notably when hacking or hovering, and if you’re like me you’ll quickly abandon the right stick when selecting your active ability. It’s too imprecise and cycling through them with the bumpers works better.

Of course, the biggest issue with the controls is the one that doesn’t exist: camera control. With the right stick used to select abilities there’s nothing left to move the camera around, leaving you at the mercy of the game’s fixed camera.

Colourful and appealing, the environments in Spare Parts are one of the game’s strong points. Whether you’re traversing lush jungles, spelunking through caverns or bounding across cliffs, it all looks very polished. The robots have plenty of spinning/rotating parts on their bodies, and in addition to being technically sound they also project some personality. Enemy creatures and aliens are cutesy rather than menacing, which plays to the casual nature of the game.

A respectable soundtrack does its job, providing upbeat tunes that complement the in-game action while not becoming tiresome. Actor Simon Pegg (best known for Shaun of the Dead) provides the voice of the friendly ship’s A.I. and manages to inject some humour into a fairly bland character. Sound effects are middling.

As you’d expect, the plot is basic. You’re marooned on an alien planet and must collect ship parts to repair the vessel helmed by Con-Rad, the A.I. voiced by Pegg. Trying to prevent your escape is the sinister Lord Krung, an energy sword wielding baddy that will dispatch his legions of Krofax minions in an effort to stop you.

Against this backdrop you (and potentially your partner) must make your way through a total of four zones and 16 levels, each of which has a number of parts to locate. The levels are fairly small, but it’ll still take time to uncover all the parts — sometimes because they’re cleverly hidden, others where you must have two players (or at least two controllers) to obtain them and some because you don’t have the requisite special abilities to reach them on your first trip through.

Spare Parts ultimately boils down to light platforming and simplistic combat, both of which have their ups and downs for differing reasons. We’ll start with the jumping, which never asks you to make exceedingly tricky leaps, but is made exponentially harder by the troublesome fixed camera. Going left to right is usually easy. However, when it’s time to jump down screen it becomes tough to gauge distance, resulting in plenty of tumbles and cheap deaths.

Combat is also a mixed bag. With the exception of a couple boss battles, you can button mash your way through any foe by jamming the “X” button into submission. Sure, you’ll take some hits, but with almost no consequence for dying (you lose a few hundred credits), it’s the path of least resistance. Of course, it’s all the path of least fun. Those that want to inject a little more style can do weak/strong combos, aerial strikes or use special abilities to pummel foes or set them ablaze.

It’s these special abilities that stand as Spare Parts’ finest effort. You begin with just one (power arms, which allow you to smash objects) and eventually accumulate five during your journey. Each one grants access to previously unreachable areas, and as you upgrade them they also provide new combat capabilities. It’s a smart system and one that is well implemented throughout.

On the other side of the coin, however, is the camera. Yes, I’ve already mentioned it a couple times, but I cannot overstate just how much the fixed camera kills co-operative play. Instead of promoting smart co-operation you and your partner practically have to be in lock step with one another or the camera will choose to follow one and leave the other to die and respawn.

Even when the camera is behaving you’ll find you’re still doing stuff like repeatedly decking your partner in combat. And while you can do things like play rock-paper-scissors and earn combat bonuses with your fellow automaton, the act of co-operating rarely extends beyond “you stand there, I’ll stand here and we’ll open this door.” Compare that aspect of the game to something like last year’s Lara Croft and the Guardian of Light and Spare Parts comes up short.

While it’s unfortunate that a game billed as a two-player adventure is so much better when played on your own, Spare Parts does enough right that there’s still some fun to be had.

By Herija Green
This entry was posted on Thursday, February 3rd, 2011 at 4:55 pm and is filed under Herija Green, Video Game Reviews. You can follow any responses to this entry through the RSS 2.0 feed. Responses are currently closed, but you can trackback from your own site.