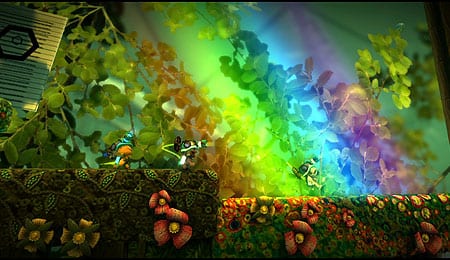 On the adorableness scale LittleBigPlanet 2 is off the charts.

As it was released more than a year before I took the Playstation 3 plunge, I never found the time to pick up the original LittleBigPlanet, but when I saw the sequel was ticketed for an early 2011 release I hit up the good people at Sony to request a copy. The continuation of Sony’s Play, Create and Share initiative, LittleBigPlanet 2 is a title brimming with delightful graphics and whimsical gameplay — all of which merely serves as the appetizer for the game’s main course, an awe-inspiring array of creation tools.

During actual gameplay, you’ll be using two buttons almost exclusively as Sackboy does little more than jump (X) and grapple/shoot (R1). Jumping is pressure sensitive, but it won’t be giving Super Meat Boy a run for its money anytime soon in the responsiveness department with some floaty physics, which can lead to some annoying missed jumps.

There are a lot of great-looking games out there. However, you’d be hard pressed to find one that pops off the screen with the type of charm and vibrancy of LittleBigPlanet 2. Each and every world you visit during the game’s story mode has unique visuals while still adhering to the overall sense of pure wonderment. It may sound hokey to classify it as “a child’s imagination brought to life,” but I cannot think of a better way to verbalize it.

Beyond the amazingly rich backgrounds there is, of course, Sackboy himself. While he may not have the rich history of a Mario or even a Sonic, there’s little doubt he’s emerged as one of the most endearing mascots in gaming. Seeing all the ways gamers have dressed him up is pretty adorable with my personal favourite being when someone had him in a shark suit.

The music of LittleBigPlanet 2 is excellent as well, offering up a mix of the familiar and the unique. The common thread being that the tunes are consistently catchy while doing a great job of matching the on-screen zaniness. There was at least a couple times where all the elements came together perfectly to create the type of experience that would’ve blown my mind as a child.

In contrast to the awesome soundtrack, the voice acting is marginal at best. Perhaps it was the utterly forgettable banter between the characters that dragged it down a notch. Or maybe the voices just lacked the personality to match the rest of the game’s presentation. Whatever the case, it rates as the weakest aspect of the audio.

LittleBigPlanet 2 offers what is essentially a three-pronged assault on your free time. You’ve got the single-player campaign (AKA, Story Mode), user-created levels and also the option to start building your own content from scratch. We’ll tackle the story mode first, which follows the adventures of Sackboy, who must save the inhabitants of Craftworld from the attacking Negativitron. It’s a pretty loose, and at times largely nonsensical, plot.

That being said, many will view the campaign primarily as a detailed introduction to the game’s robust feature set as it appears that a conscious effort is being made to showcase all the various elements that would-be designers can implement into their own creations. So while side-scrolling 2.5D platforming does most of the heavy lifting, you’ll also find levels that feature on-rails shooting segments, those that have you riding a small menagerie of unusual beasts and much more.

The story mode spans six stages and contains roughly 40 levels as you take the fight to Negativitron — a big purplish vacuum cleaner type creature with teeth — in an adventure that can comfortably be completed in a single day. There’s replay value to be found within the relatively short campaign, though, as online leaderboards rate you and the huge amount of items to be collected lends itself to multiple runs through most levels.

Difficulty wise, LittleBigPlanet 2 is quite forgiving with checkpoints conveniently located seemingly about 20-to-30 seconds apart. It’s nice that you don’t have to do much backtracking, but the game does a suspect job of keeping you up to speed on how many lives you have remaining. The white ring around the checkpoint does diminish as you fail. However, the only time you’re given a direct heads up is when an audio cue tells you that you’ve only got one left.

As strange as it may sound, the platforming elements, which constitute the majority of the gameplay, are one of the title’s weak points. The oft-times dicey controls mentioned earlier play a major role in that and were it not for the immense amount of content available to download or generate yourself it’d be a significant drawback. Fortunately, though, LittleBigPlanet 2 is about so much more.

For starters, all the amazing stuff that was created throughout the lifecycle of the original title is compatible with the sequel, which gives gamers a ton of material from the start. As good as some of that content is, however, one has to figure that once the community has had enough time to digest the sheer amount of tools at its disposal this time around that those past efforts will pale in comparison to what will be built from the ground up.

Novices (myself included) may find the whole thing a bit overwhelming at first as the game features literally dozens of tutorials painstakingly outlining the how-to process. It takes north of an hour to view them all, but they do an excellent job of walking you through everything and providing a foundation for crafting levels from scratch. Once you get a feel for everything, the procedure is amazingly streamlined, allowing for complex creations in a relatively short amount of time.

Although there’s no way to do justice to the choices would-be level designers will have, there are a few items that deserve special recognition. For starters, Sackboy can use a helmet-mounted weapon called the “Creatinator” that allows him to shoot projectiles and a “Grabinator,” which gives him the ability to lift and hurl objects. There’s also the “Controllinator” — a creation tool that lets users dictate the button functions on the controller when playing their level. Beyond that there’s also the ability to program Sackbots with different A.I. patterns, arrange cinematic cut scenes and even compose original music with the music sequencer. Are you starting to see the amazing possibilities here?

All of the game’s online components work well. Competitive and co-operative multiplayer is supported and it is exceedingly easy to drop into and out of someone’s game. It’s also quick to search, play and rate community levels. You can even author reviews based on your experiences. About the only drawback are the fairly substantial load times that permeate LittleBigPlanet 2. If it were just the online hosted levels, that’d be more understandable, but the pre-packed story mode levels are plagued by it as well.

LittleBigPlanet 2 is brilliantly constructed, putting the power of creation into the hands of a gaming populous like no title before. Loose controls and long load times are disappointments, but those issues cannot undermine a title that has the potential for nearly limitless replay value.

By Herija Green
This entry was posted on Tuesday, February 1st, 2011 at 6:45 pm and is filed under Herija Green, Video Game Reviews. You can follow any responses to this entry through the RSS 2.0 feed. You can skip to the end and leave a response. Pinging is currently not allowed.