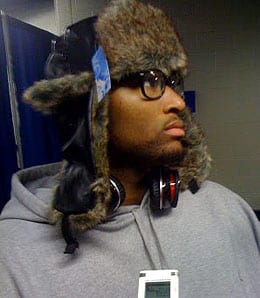 DeMarcus Cousins’s head — and apparently headgear — have come under fire, but he’s getting it done for the Kings.

Welcome to the Week Nine edition of the Wire Troll, our weekly look at players that may be available on your league waiver wire, but could see a spike in Fantasy value due to a variety of circumstances.

Another short one this week, gang: The Troll is hip-deep in his Christmas shopping, and I have been pulling my hair out trying to find that one special item that would make a certain young lad’s Christmas morning extra special. I was unlucky enough to draw RotoRob’s name in the office Secret Santa lottery, and have just about given up trying to score that Marvin Williams FatHead I just know the Big Boss is craving. And here I thought you could find anything online. It’s not that I don’t care, Rob; it’s just that in order to have a FatHead, you have to be, well…good – or Carson Palmer.

Speaking of cyber shopping, I’m about to go loopy trying to change an order I placed a couple days ago. Sakes, how was I to know Aunt Betty had gained 30 pounds since I saw her at the Fourth of July bender…err…picnic? I don’t think I’m making much progress with the fulfillment company; I keep getting transferred to some guy named Peggy. Ah well, maybe Aunt Bet will be happy with yet another gift card…hey, it’s from the heart…really, it is.

As the Troll goes to cyber-press, the details of a deal sending Gilbert Arenas to Orlando — a trade that RotoRob was all over weeks ago — have yet to be released. Vince Carter and Rashard Lewis may be involved, with obvious Fantasy implications therein. As soon as we know who’s going where, we’ll update you via the Wire Troll’s Twitter page. You are following us, right?

DeMarcus Cousins, Sacramento Kings: In the immortal words of Crosby, Stills, Nash and Young: It’s been a long time comin’. Well, okay, not that long, but it appears as though the rookie centre is ready to assert himself as a Fantasy force in the post. Through eight games in December, Cousins is averaging 13.3 points, 8.1 rebounds and 1.9 assists. He still needs to improve his shooting touch, and we’d love to see him blocking more than 0.5 shots per night, but keep in mind that he swatted 1.8 per outing at Kentucky. Patience, Grasshopper.

Glen Davis, Boston Celtics: Big Baby was featured in an early-season edition of The Troll, but his play lately has moved him up a notch in terms of Fantasy worth. With the O’Neal brothers out, he is averaging 14.4 points and 6.8 boards in December – while shooting a robust 51.7 from the floor and 79.3 from the stripe. The Celtics are threatening to run away with the Atlantic Division, and a big playoff cushion should mean more minutes for Davis and fewer for that aging triumvirate of stars in Beantown.

Taj Gibson, Chicago Bulls: With starter Joakim Noah out for approximately 8-to-10 weeks following thumb surgery, the spotlight falls on Gibson to provide a powerful inside presence. He was solid while Carlos Boozer was on the shelf, averaging 11.3 points, 6.9 boards and 1.5 blocks in 14 games as a starter. Don’t look for big point totals, but Gibson should be a fine source of boards and blocks – while shooting in the high 40s from the field.

Martell Webster, Minnesota Timberwolves: He missed the first seven weeks of the season recovering from back surgery, but he tallied 19 points and grabbed nine boards Friday night in what was just his third game back. He looks like he could become an integral part of Minnesota’s offense, but keep in mind that Webster’s game runs like a tenement faucet in mid-January. If it’s consistency you’re after, keep moving…but if the Wolves are committed to getting Webster the rock, he could rack up some huge three-point totals – and occasionally drop a two-point clunker on the board. Hey, he’s on the wire for a reason, kids.

Nate Robinson, Boston Celtics: Rajon Rondo looks to be out for a couple weeks with his sprained ankle (and various other health woes), so Little Nate becomes a must-own while R2 is away. Nate-Rob posted 14 points, two treys, five assists and three steals in over 41 minutes of court time Thursday night, and his Fantasy owners should anticipate more of the same in the coming days. We tweeted the news as it broke, so hopefully you’ve already pounced, but if Robinson is somehow still available in your league, go grab him now.

Ty Lawson, Denver Nuggets: Chauncey Billups is showing definite signs of wear and tear, and the torn ligament in his right wrist has opened the door for Lawson to shine…and has he ever. Billups may be back as soon as Wednesday, but the fact that Lawson has averaged 15.5 points and 6.5 dimes in Mr. Big Shot’s stead should make him a worthwhile add in deeper leagues – especially if you own Billups. Even though he has started only four games this season, Lawson is still averaging 10.2 points, 0.8 treys and 4.2 assists in 25 minutes per night – while shooting 49.7 per cent from the field and 37 from beyond the arc. And if Billups has to undergo surgery at some point (a legitimate possibility), you’ll be glad you plucked Lawson off the wire now.

By Buck Davidson
This entry was posted on Saturday, December 18th, 2010 at 1:04 pm and is filed under BASKETBALL, Buck Davidson, The Wire Troll. You can follow any responses to this entry through the RSS 2.0 feed. You can leave a response, or trackback from your own site.