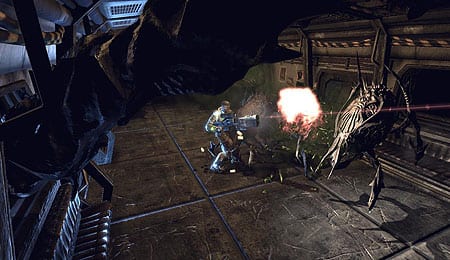 Is this gonna be a standup fight, sir, or another bug hunt…

While Microsoft’s Games for the Holidays were all enjoyable titles, they undoubtedly turned the saccharine dial to maximum. In fact, we may have enjoyed those adorable games a little too much…to the point where some manhood questioning could be in order. That means it’s time to inject some testosterone into the mix because at the end of the day, we here at RotoRob like it when some combination of Nazis, aliens and/or zombies is dying a gruesome death at our hands.

To that end, we think it’s time to dole out some guns blazing action to re-establish humanity’s rightful spot atop the food chain. On the menu this week…aliens. Specifically, we’re handing out copies of Alien Breed 3: Descent on Xbox Live Arcade and Alien Breed 2: Assault on Playstation 3 to all you would-be xenomorph hunters.

Now on to the details as to how you win…

3. Tweet the following, “Get your assault rifles ready @VideoGamerRob is giving away Alien Breed 2 & Alien Breed 3! Follow & win – http://bit.ly/f3KpvR – #VGRAB” (That’s one entry.) Once again, make sure to include the hash tag.

That’s all for now, but keep following along on Twitter as there may be chances to earn more stuff: entries, codes, who knows? Winners will be announced on Friday, Jan. 21, so they can spend the weekend killing aliens! Good luck, everyone.

By Herija Green
This entry was posted on Friday, January 14th, 2011 at 5:57 pm and is filed under Contests, Herija Green, Video Game Reviews. You can follow any responses to this entry through the RSS 2.0 feed. You can leave a response, or trackback from your own site.