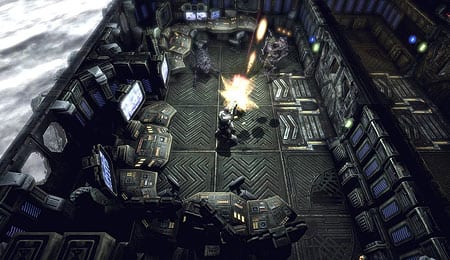 Conrad just needs to know one thing…where they are…

Easily one of my all-time favourite films is Aliens, the guns blazing sequel from James Cameron that somehow manages not to look outdated nearly 25 years after its release. It should come as no surprise then that I enjoyed Team 17’s recent effort Alien Breed 2: Assault, which borrows liberally from the Cameron classic while sprinkling in a bit of Event Horizon for good measure.

The basic “move with the left stick, aim with the right” scheme is in effect here with the right trigger firing your gun and the left trigger using items (health packs and grenades). It’s simple enough, but aiming feels imprecise and there were several times when I thought I’d killed something only to have it attack me once I changed targets. Part of the issue is that your weapon’s laser sight is a bit too dim and can get lost amid the action.

You’ll also have to become adept at switching camera angles using the bumpers to keep enemies from attacking you unseen. I struggled with doing this during combat since your aim also adjusts when the camera is moved, but as I progressed I became pretty good at reading the motion tracker and adjusting ahead of time rather than on the fly.

Created with the Unreal Engine, which has been used to such great effect in games like Gears of War, Alien Breed 2: Assault favours the same kind of brawny protagonist (Conrad), though the action is shown from an isometric perspective. The entire game takes place within a ghost ship that has been overrun by hostile life forms, making for a cool (if familiar) setting where the technology has begun to erode and is now being reclaimed by organic alien life.

Overall, the environments hold up well with lots of detail work, but the game lacks for diversity as you seem to be encountering almost identical rooms throughout the entire campaign. There isn’t a ton of variety with your adversaries, either.

When it comes to the audio portion of the game, Team 17 can be commended for making the guns’ sound have great impact, and the screech of incoming aliens unnerving. Conversely, the dialogue (both spoken and written) is dreadful. The voice acting is limited to a handful of comic panel cut scenes shown in between levels, but that brevity is its lone redeeming feature. Text-based discourse is more prevalent but every bit as cringe inducing, highlighted by your A.I. counterpart saying “Oh, dear” while tumbling down a flaming elevator shaft.

A follow up to last December’s Alien Breed Evolution, the game kicks off with your vessel crashing into a derelict ship. Naturally you’ll need to venture onto this ship to free your own, but you quickly discover you are not alone. Now it’ll be up to you, guided by your trusted A.I., to fight through hundreds of dangerous aliens in an effort to detonate the ghost ship to dislodge yours. The story itself brings virtually nothing new to the table, instead keeping it straight forward while paying homage to other sci-fi films with rehashed ideas.

What the game really boils down to is going from Point A to Point B and eliminating anything that tries to stop you. To that end nearly all your progression is made by rebooting a system or tracking down a key card so that you can access another area on your path to the ship’s nerve centre. Like the story, it’s not an original concept, but that doesn’t mean it cannot be fun — quite the contrary, as there’s a definite level of satisfaction to be found in mowing down hordes of aliens.

Alien Breed 2: Assault will run you around five-to-six hours on the middle difficulty level depending on how much you choose to explore. The game does a good job of encouraging investigating thoroughly by scattering goodies like ammo, health packs and credits throughout the ship. On the lowest difficulty you may not need much more than you find on the basic path, but on the two higher settings these things can become scarce so you’ll want to scrounge everything you can get your hands on. In addition, you’ll also be able to upgrade your weapons along with the potency of your health packs and grenades at terminals scattered throughout the ship.

However, the combat, while largely enjoyable, doesn’t present anything you haven’t seen before. Even though the aliens have different abilities (one charges, one can shoot, one slows time) they’re all dispatched the exact same way: in a hail of gunfire centre mass. The limited boss fights are uninspired and repetitive as well.

Outside of the five-act campaign, there are also a few co-op levels that you can tackle locally with a friend or via Xbox Live. Given the scarcity of ammo and lack of funds necessary to upgrade weapons, these can make for some intense battles. A survival mode where you’re scored whilst fighting against never ending waves of aliens is present as well.

Formulaic and repetitive as it may be at times, Alien Breed 2: Assault is still an enjoyable top-down shooter at its core that offers a sizable amount of bang for your buck.

By Herija Green
Tags: Aliens
This entry was posted on Monday, October 18th, 2010 at 1:38 pm and is filed under Herija Green, Video Game Reviews. You can follow any responses to this entry through the RSS 2.0 feed. Both comments and pings are currently closed.