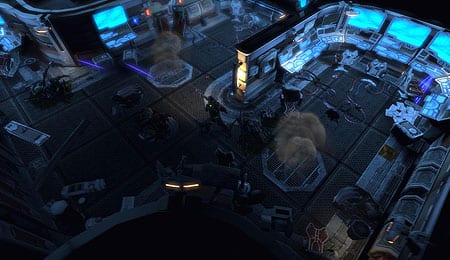 Quiet moments like these are few and far between in Descent.

Less than two months passed between Team 17’s releases of Alien Breed 2: Assault and Alien Breed 3: Descent, which serves as the conclusion to the Alien Breed trilogy. If you played the last one, you pretty much know what you’re in for — whether that’s a good thing or not will depend greatly on if you got your fill of gunning down aliens last time around.

Everything is identical to the previous game. To get my thoughts on this aspect please click here.

Things haven’t changed much here, either, as Alien Breed 3: Descent still has a strong level of detail work in the environments. There are a handful of scenes that look great that take place with Conrad waste deep in standing water with only his flashlight to illuminate an otherwise darkened interior. However, the most notable difference from the last game to this one is the overabundance of explosions that seem to go on for the entire five-plus hours.

Yes, it makes sense that a ship that is being torn apart while its orbit is destabilizing would be blowing up, but that doesn’t make the constant shaking of the screen any less annoying. Plus, adding a shaking screen on top of dimly lit corridors and view-obstructing overhangs can create frustrating moments.

On the bright side, the voice acting is improved thanks to the arrogant super A.I. known as Klein doing the vast majority of the talking. His stereotypical condescending laughter can become a bit grating after a while, but you’re supposed to despise him so it’s hard to quibble with their methods in accomplishing that. Sounds effects and music are still good, though someone needs to explain to me why the ship’s computer kept telling everyone they needed to get to the escape pods even well after it had crashed.

Picking up right where the last one left off (minus all your guns and equipment), Descent centres on Conrad’s efforts to destroy the rogue A.I., Klein, against the backdrop of a crashing ship. With the story reaching its finale, Team 17 ratchets up the action aspects of the game by increasing the sheer number of aliens you’ll be fighting throughout. While I understand the thought process behind that decision I felt it actually made for less intense action than Assault.

With enemies constantly bursting forth from seemingly every wall and floor panel, there’s rarely time to build any semblance of suspense. Some of the best moments from the last game were moving slowly through areas anticipating an attack that never comes. This time the number of aliens materializing out of the same spot had me thinking of clown cars where just when you think another one couldn’t possibly pop forth, it shows up.

While moving toward a more action-oriented style will be viewed as a positive step by some, there were some universally frustrating problems in the environments. Most damning were the technical issues I ran into where I became stuck and had no choice but to restart from my last save point. Were it a one-time thing I would’ve chalked it up to a fluke. After four times, however, it bore mentioning.

Odd design choices also made for some sections where your inability to reach one area from another was so non-organic that it pulled me out of the experience. Things like a dumbbell on the ground or a slightly elevated walkway require you to walk around. It’s not a big deal if you’re just walking through a room. However, if you’re being chased by aliens and have to double back through the entire group because you can’t access an area you thought you could it becomes annoying.

Despite some troubles, Descent does retain the same satisfying combat as its predecessors in even greater doses. Those that have played Alien Breed before will recognize most of the guns, items and enemies from the earlier titles, though Descent introduces an electricity spewing alien along with a pair of new guns that kick some serious ass. The Electro-Link effectively disintegrates enemies in front of your eyes while Project X brings the pain in a big way. Like past offerings, guns can be upgraded to have more power or faster reloading.

Expect to spend around five hours before the final credits roll, putting Descent at roughly the same length as Assault. Online and local co-operative play make their return along with Survival mode, which again challenges you to hold out for as long as you can against an endless alien onslaught.

Between the constant flow of enemies and persistent shaking of the screen from explosions I didn’t enjoy Alien Breed 3: Descent as much as its predecessor. It’s still a solid twin-sticks shooter and worth playing if you’ve followed the story this far — I just wish some of the suspense elements from the last title had been left in.

By Herija Green
This entry was posted on Monday, December 13th, 2010 at 10:26 am and is filed under Herija Green, Video Game Reviews. You can follow any responses to this entry through the RSS 2.0 feed. You can skip to the end and leave a response. Pinging is currently not allowed.