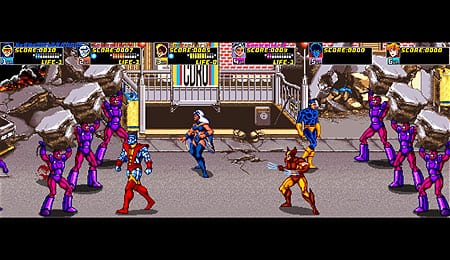 You have to love the old school brown and yellow Wolverine. Lookin’ sharp, bub!

It’s been nearly two decades since Konami’s X-Men waged war on my allowance by deftly coaxing quarter after quarter from my pocket in the quest to defeat Magneto and his army of sentinels. Redubbed X-Men Arcade and released last month on both Xbox 360 and Playstation 3, this version is virtually identical to the original, for better or worse.

With this being a straight port, X-Men Arcade has a pretty limited setup. Attacks are made with either the “B” or “X” buttons (there’s no difference between them) while your mutant powers are unleashed by pressing “Y.” Where the controls really show their age is when jumping (A) as you can only jump straight up in the air or forward/back. Without the option to jump up/down the screen or diagonally, your ability to avoid attacks is much more limited.

Since Konami no longer holds the X-Men license (cut to Activision laughing maniacally), its deal with Marvel to revive an 18-year-old title left it unable to make any changes to the game, including the outdated graphics. At least the characters themselves are colourful and easily recognizable, though it gets tough to identify yourself when you’ve got a full complement of gamers along with multiple enemies on the screen at the same time.

There isn’t much to the game’s audio, either. A handful of basic tunes recycle throughout and the sound effects are pretty comical, particularly the basic punch attacks, which use the same “psh” sound I make when I’m riling up my dog. The voice acting has been re-dubbed, but the dialogue remains legendarily hokey — nostalgia buffs should appreciate the hands-off approach, though others may not.

In a side-scrolling beat ’em up originally designed to gobble quarters, it should come as no surprise that the game’s story is pretty much non-existent, and what’s there makes little sense. The broad strokes are Magneto is trying to do something bad and it’s up to you (and the other X-Men) to stop it. To do this you’ll need to battle through hundreds of sentinels, alligator things and robots along with some familiar foes like Mystique, Juggernaut and Pyro.

X-Men Arcade offers you the choice of six X-Men: Cyclops, Storm, Colossus, Kurt Wagner (though in the Munich circus he was known as Nightcrawler), Wolverine and, of course, Dazzler. Each member has a basic assortment of punches, kicks and throws along with a unique mutant ability that can strike multiple enemies simultaneously. The tradeoff is that using their ability drains your health, preventing you from spamming attacks — at least, that’s what it did when each death brought you one step closer to producing yet another shiny 25-cent piece from your emptying pockets.

Therein lays the biggest issue with transitioning X-Men Arcade to the home arena: without financial repercussions, there is absolutely nothing stopping anyone from exclusively using their mutant power throughout the entire game. Sure, you and your friends can use the honour system and manually keep track of your deaths, but short of doing that there’s no deterrent. You’ve got unlimited continues and your score doesn’t reset, which has turned most online games into a bunch of people using their mutant powers as many times as they can, dying and then doing it all over again — and trust me, you haven’t known monotony until you’ve heard Colossus’s signature grunt 500 times in a 30-minute span.

It’s an unfortunate situation, too, as despite its simplicity, X-Men Arcade provides for a challenging good time when gamers play it the way it was supposed to be played. That means with several friends (or strangers) relying primarily on their melee attacks and only unleashing mutant powers when confronted with overwhelming odds or tackling a boss fight. If you can assemble a group willing to do that, then this is still a really enjoyable multiplayer title.

There are very few bells and whistles to be found — almost certainly another byproduct of Konami’s deal with Marvel — with the only real option being whether you want to play the U.S. or Japanese version. The difference being that in the Japanese version defeated enemies drop health and mutant power items, which are used before starting to draw on your health.

Online play is easy to jump in to as you’re given the option to host a match, join a quick match or search all available matches. It runs fairly smooth, though I routinely got a banner across the top of the screen telling me I couldn’t contact the host. These usually popped up for only a couple of seconds max and are preferable to traditional lag. The problem with online games, as noted, is the rampant abuse of mutant powers, which removes any semblance of skill from the proceedings.

Even though you can complete the game’s eight levels in less than 30 minutes, X-Men Arcade remains a solid title. If you know people, or can find a group, willing to play cooperatively in a manner befitting the game’s lineage (read: no power spamming) there’s still plenty of fun to be had here.

By Herija Green
Tags: Konami
This entry was posted on Thursday, January 13th, 2011 at 11:47 am and is filed under Herija Green, Video Game Reviews. You can follow any responses to this entry through the RSS 2.0 feed. Both comments and pings are currently closed.