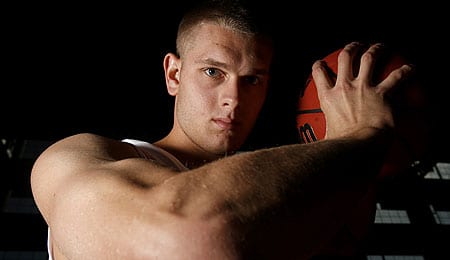 Cole Aldrich may still get some burn with the Thunder, but for now he’s in the D-League.

Back in the preseason, we expected Cole Aldrich to emerge as one of the season’s top rookies based on the open competition that was the Thunder’s centre job this fall. And while the kid seemed at least part of the rotation in the first two weeks of the season, he hadn’t played at all over for over two weeks, so last week Oklahoma City wisely sent him down to the D-League. So far, so good for Aldrich as he’s averaged nine points, six boards and one block in his first two games for the Tulsa 66ers. The Thunder is rolling now, having won 12 of its last 15, so there’s no need to rock the boat, but Serge Ibaka has been a bit inconsistent lately and Nenad Krstic is no one’s idea of a long-term solution, so I still believe Aldrich will be heard from again this season.

Washington lost 105-94 in Miami Monday night and still hasn’t won on the road, the only such team in the Eastern Conference. With super rookie John Wall still hurting, Gilbert Arenas is getting all the burn he can handle, and he’s responding. In over 41 minutes of action Monday, the man formerly known as Agent Zero put up 23 points, seven assists, five rebounds and three treys. Any concerns about Arenas’s ability to handle a heavy load have to put aside now, as he’s averaged over 40 MPG over the last five.

Meanwhile, as the Wizards fall further out of the playoff picture, Arenas starts to look like a great candidate to be traded as this is now Wall’s team, and they’d love to divest themselves of the troubled veteran while they can – before he gets hurt or does something stupid. Orlando could be a perfect match, as the Magic has opened stated that anyone besides Dwight Howard is available, and this is a team that can really use a player that can create his own shot like Arenas. Over the next couple of months, I’d keep my eyes on this situation.

JaVale McGee (back/head pain) didn’t start Monday’s game because of his health woes, but he came off the bench and still put up another double-double for Washington. Then again, that’s hardly news anymore. We had this dude ranked 45th among power forwards heading into the season, mostly because he lacked consistency. Well, he’s showing it now – in the last six games, McGee is averaging 13 points and 12.2 rebounds, and the way he’s going so far this season, he’s a top 20 power forward, which makes him one of the early-season steals considering he went around the ninth round of your draft.

As discussed, the Wizards are slipping further out of playoff contention with their play of late. With the drafting of Wall and the addition of Kirk Hinrich, we thought Washington might have the depth to compete for a playoff spot, but that hasn’t happened so far. Hinrich has actually played a much bigger role than anyone could have expected, starting every game of the season, but despite the increased role, he’s not exactly filling it up. On Monday, he did manage two steals, but is only averaging one per game this season – the lowest number of his career. But really, that’s all he offered last night, and frankly I’m not sure he’s doing enough with his minutes to earn any Fantasy love. He’s only 5-for-19 from the field in the last two games, and he has not reached double figures in scoring in any of his last four games. Hinrich is definitely not a must-own, especially with Wall due back any game now. Now if Arenas gets dealt, Hinrich stands to benefit greatly, but that might not happen for another couple of months, if at all.

Trevor Booker, the 23rd overall pick in this year’s draft, was a pretty good shot blocker at Clemson, averaging 1.9 per game in his four seasons there. On Monday, the Wizard rookie had his first multi-block game — not bad considering he only played 7:45 and before this game he had only totaled two blocks for the season. Booker doesn’t have much upside, and he’s not seeing enough minutes to matter yet, but if he can emerge as a bit of a blocks specialist, he might be useful in deeper leagues.

Andray Blatche broke out offensively on Monday, scoring a season-high 26 points while adding nine boards and a block. We had Blatche ranked No. 26 on our pre-season power forwards cheat sheet, and he’s been close to. So is Monday the sign that he’s about to go on a scoring tear? Well, before we jump to conclusions, let’s put things in perspective. The Heat has been getting murdered by big men all season long, and Monday was Blatche’s turn, so don’t automatically assume that he’s ready to start scoring in the same manner that he did in the second half of last season. The larger issue here has been his shooting touch; Blatche is getting more touches than ever, and getting to the line more often than ever, but his FG percentage (41.9 per cent) is the worst mark he’s had since he was a rookie. That’s what’s really holding him back from regularly scoring 20 points or more. And the fact that it’s been two weeks since he last sunk more than 44.4 per cent of his shots in a game is telling. Last season, Blatche shot a career high 47.8 per cent from the field; this season he’s hit at least half of his shots only twice in 16 games. That’s a problem for a big man, and if you own him, you’re likely suffering in that category.

By RotoRob
This entry was posted on Tuesday, November 30th, 2010 at 2:07 pm and is filed under BASKETBALL, NBA Today, RotoRob. You can follow any responses to this entry through the RSS 2.0 feed. You can skip to the end and leave a response. Pinging is currently not allowed.