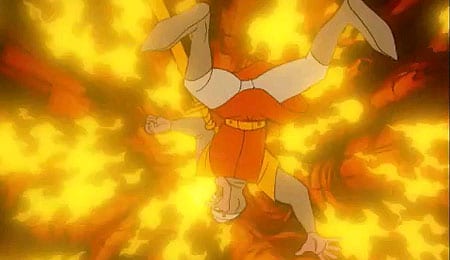 Here’s Dirk dying because of one false move. You’ll see that a lot when you play this awful game.

When I was growing up, I spent plenty of time at local arcades playing everything from the original Star Wars arcade game to Street Fighter 2 (and its many iterations). However, I never, ever played Dragon’s Lair because it was always too expensive during its heyday. I watched it and thought it looked cool, but I do recall seeing many a frustrated kid walk away from it.

Some two decades later, an “authentic” version has been released. How has it aged? Not well. Not well at all, and really, there could have been a little bit done to make this a much more enjoyable experience. As it stands, this is probably one of the worst gaming experiences I’ve ever had.

Dragon’s Lair is one big quicktime event. To properly interact with those quicktime events, you’ll move up, down, left, or right, and sometimes hit a single button. That’s it, and you’ll see how far quicktime events have come when you compare this to Heavy Rain or God Of War. The controls are simple and responsive, but not forgiving. The amount of precision required to execute properly even on Easy mode is irritating and really sucks the enjoyment out of the game.

If you don’t know the original history of Dragon’s Lair, the reason why it looks like an animated movie is because animator Don Bluth created it. With animation quality and music of a feature film, Dragon’s Lair looked mind-blowing back in the 1980s when it invaded arcades on a laserdisc system. These days, the visuals still hold up as well as any classic animated show or movie would. The colours are bright and pop off the screen, the characters are unique and well drawn, and the animation moves well.

Sound effects are fairly rudimentary for the genre — sword swings, monster sounds, etc. It feels like you’re watching a cartoon. However, that cartoon ultimately has a thin plot and poor characterization.

Simply put, Dragon’s Lair is not fun to play. You can play the game with either a movement guide in the lower left corner or without anything to prompt your movement. This provides two major problems. One, if you use the movement guide (and considering how unforgiving the game is, it’s essentially necessary), you’ll spend your whole time watching the corner of the screen and missing the animation. This winds up neutering the game experience, since its biggest selling point is the animation.

However, if you don’t use the movement guide, you have a different problem as you have no idea what to do or when. I suppose this creates the ultimate interactive cartoon experience. However, the precision required to have a successful quicktime input makes this mode pretty much impossible unless you have the game memorized.

Modern quicktime events give you enough leeway that you have time to see the cue, register what to do in your mind, and do it. It creates an interactive experience that lets you enjoy cinematic visuals without taking you out of the game. The issue with Dragon’s Lair is that this system hasn’t been modernized. You have a tiny window of time to do each action, and if you fail, then you die. This creates one of the most frustrating experiences in gaming today. This isn’t old-school difficulty a la Mega Man or Demon’s Souls, this is just poor and lazy design.

While this iteration of Dragon’s Lair creates an authentic arcade experience, a little bit of effort could have made this enjoyable for people outside of the nostalgia set. It could have been easy to integrate a quicktime event guide over the gameplay screen that wasn’t relegated to the corner. Similarly, the developers could have tweaked the game’s settings to be more forgiving with action inputs.

Instead, you get a game as strict as the original. Back in the 1980s, Dragon’s Lair’s visual experience was unique enough to overcome the awful gameplay. It ain’t that way anymore; you’re better off going on YouTube and seeing if you can watch the game’s animation instead of playing it.

By Mike Chen
This entry was posted on Sunday, December 19th, 2010 at 3:38 pm and is filed under Mike Chen, Video Game Reviews. You can follow any responses to this entry through the RSS 2.0 feed. You can skip to the end and leave a response. Pinging is currently not allowed.