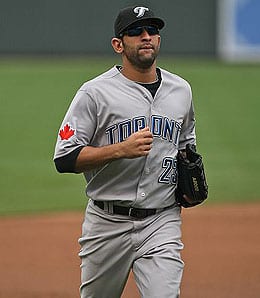 Who will be next season’s Jose Bautista?

Each and every offseason, the speculation begins. Who will be the next unsung hero to rise from obscurity and propel our Fantasy squad on its path to eventual September glory? In 2010, those that invested in Colby Lewis and Jose Bautista reaped some rather huge rewards. It’s still very early in the annual rite of passage known as free agency, but all three of the players listed below could be in the enviable position to return some decent value in 2011.

Without further ado, let’s take a look at three of my early favourites that are currently flying under the radar.

Tom Milone, SP, Washington Nationals: The 23-year-old southpaw continues to defy the odds and move up the prospect charts for the Washington Nationals. This guy is so far off the radar he’s not even currently listed in the CBS or RotoWorld databases. The recently crowned Nats Minor League Pitcher of the Year for 2010 has come a long way since being drafted in the tenth round out of USC in the 2008 amateur draft. The knock on Milone has always been the fastball, or should I say lack of a fastball.

He’s not going to overpower hitters with that high 80s heat, but a great changeup and the addition of the cutter to his repertoire — combined with his stellar control — and all of a sudden he’s starting to get a bit more attention and justifiably so. In 2009, at Potomac in the High-A Carolina League, Milone posted a 12-5 record with a great 2.91 ERA while allowed 144 hits and 36 walks with 106 strikeouts in 151 1/3 IP. He was promoted to Double-A Harrisburg to start the 2010 season and continued to build on that great 2009 campaign.

Milone duplicated his record from 2009 and allowed 161 hits and a scant 23 free passes in 158 IP. More importantly, he boosted his strikeout totals to an impressive 155. In 59 innings after the break, he allowed only 54 hits and just four walks against 69 strikeouts. Milone didn’t skip a beat in making the move to a higher level and actually posted a huge increase in his strikeout rates. He’s not getting any love from the prospect hounds, but he simply keeps proving the critics wrong and don’t be surprised to see this trend continue in 2011. Milone will probably start the year at Triple-A Syracuse and be a short phone call away from joining a starting rotation that could use some help.

Kam Mickolio, RP, Baltimore Orioles: The Orioles have Mike Gonzalez returning to finish up the second half of his two-year deal, $6 million deal, so obviously — health concerns aside — he has to be the favourite to close in B-More next season. Other than Gonzalez and Alfredo Simon — who struggled badly in the second half of 2010 — the Orioles bullpen isn’t exactly overflowing with talent. Enter into the picture Kam Mickolio.

Originally the Mariners’ 18th round pick in 2006, Mickolio was part of the haul the O’s received in the Erik Bedard trade in 2008. The 6’9”, 255-pound giant struggled through most of 2010, walking way too many and giving up way too many hits at both Triple-A Norfolk and in a brief audition with Baltimore in September. Through all the trials and tribulations, Mickolio still managed to maintain great strikeout rates, fanning 55 batters in 44 IP.

At the Arizona Fall League, he finally managed to keep the walks under control and posted some truly outstanding numbers for the Scottsdale Scorpions. In 12 IP, Mickolio allowed nine hits and only two walks while whiffing an eye-popping 18. The Orioles’ pen is in a proverbial mess, so a high strikeout reliever would be a huge asset for them in 2011. He certainly wouldn’t be the first player to use the AFL as a springboard to success.

Jake McGee, SP/RP, Tampa Bay Rays: The Rays’ bullpen — a source of strength in 2010 — is in the process of undergoing some rather radical change. Closer Rafael Soriano is a free agent and won’t be returning, Joaquin Benoit has bolted to the Tigers on a three-year deal worth $16.5 million, Dan Wheeler’s $4-million option has been declined and Grant Balfour is a free agent. The relief corps is getting just a tad thin for 2011.

Is the answer lurking in the form of a converted starter working his way back from Tommy John surgery? It certainly could be an option. In 2010, McGee started the season in the rotation at Double-A Montgomery and put together a solid 3.57 ERA in 19 starts. The 100 strikeouts he racked up in 88 1/3 IP certainly got my attention. He was promoted to Triple-A Durham at the beginning of August where he was used out of the pen, allowing a scant nine hits, three walks and only one earned run in 17 1/3 IP with an amazing 27 strikeouts.

The Rays called him up for a cup of coffee in mid-September and in five innings he allowed one earned run while striking out six. Tampa Bay is currently six-deep in starters with virtually no bullpen in sight, making the former top prospect a very interesting option in the revamped bullpen in Tampa Bay next season.

By Tim McLeod
Tags: Colby Lewis
This entry was posted on Saturday, November 27th, 2010 at 11:53 pm and is filed under BASEBALL, Prospects, Sleepers, Tim McLeod. You can follow any responses to this entry through the RSS 2.0 feed. Both comments and pings are currently closed.