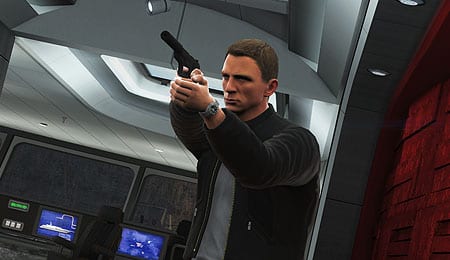 Blood Stone stars Daniel Craig as James Bond, or at least a weird plastic-looking version of him.

As James Bond fans go, I believe I’ve earned my 00 status. I spent many a Saturday evening during the ’80s watching Bond movies on ABC with my dad, and I’m one of the few people who can say that I saw Licence To Kill in the theaters. Many childhood daydreams involved wearing a tuxedo and infiltrating a secret lair, which meant that Bond video games would have been the perfect escape, had there actually been any good ones. In fact, the closest thing I can think of to a James Bond game is an old PC classic called Covert Action.

Perhaps that’s why I approached James Bond: Blood Stone with a bit of trepidation. The history of 007 video gamee history is checkered, with the only good Bond game I can think of being the PS2’s Everything Or Nothing. Blood Stone follows the same formula: digitize the current Bond actor (Daniel Craig), get a Bond veteran to write the story, and build a third-person shooter.

The ingredients are all there. The results, however, are more Timothy Dalton levels of Bond satisfaction.

Let’s be blunt: Blood Stone looks awful and sounds great. The character models would seem bad even by PS2 standards, let alone current generation hardware. In fact, there were times when I almost felt like I’d revisited Syphon Filter from the old PSone days. Craig and resident Bond babe Joss Stone look like someone imported their Sims 3 creations while the model for Dame Judi Dench is…well, let’s not even go there.

The backgrounds and environments are standard, not spectacular, especially considering how detailed we’ve seen games in the past year or two. Enemies are generic, details such as snow and weather flicker on and off, and even cut scenes have glitches where environment texture details load seconds after they come on screen.

In fact, the only really visual appeal of the game is the animation, thanks to the motion capture of Ben Cooke, Craig’s stunt double from the last two films. Because of that, the movement feels in sync with the Bond that Craig created, from the melee sequences to the way Bond holds his gun.

On the other hand, the game’s sound is spectacular. The musical score is pure Bond and sets the mood well, while all the principle actors slip right into their roles. Pierce Brosnan gave bored performances in his video game incarnations, but Craig shows that you can be understated while still being engaged. It fits right into his on-screen delivery of Bond and should satisfy franchise fans.

The graphics get a 2 and the sound gets a 5; that means the score for this section is 3.5.

About 80 per cent of Blood Stone is a cover-based third-person shooter. There have been enough of these now that developers really should have gotten the formula down. However, Blood Stone’s cover system is too sticky for its own good, and getting in and out of cover winds up putting you in awkward positions. Also, the lack of a dedicated jump button seems kind of foolish, as this is a secret agent here, and he should be able to, you know, jump around stuff any time rather than just in context.

Bond moves around by trotting, but can spring by holding the analog stick in. This speed burst is short-lived and doesn’t have an accompanying dive (see: lack of jump button), which is a poor design choice. Again, let’s think like a secret agent here. There’s a room full of bad guys, and a big box of things to hide behind. You could trot (with five steps of spring) to the other side or you could spring a slide/dive into cover. Which would make more sense?

Since Bond is a spy, you’d also think he’d have the ability to crouch and sneak, but that’s not the case. Oh, he’ll crouch when he’s stuck in cover behind a low box, but never otherwise. I suppose that’s okay because the AI is so dumb that you don’t really need to hide all that much.

If there’s a saving grace to the controls, it’s that they’re crisp and accurate, which is necessary for a shooter. It just feels too streamlined for its own good.

Blood Stone brings in a bullet-time sequence called Focus Kills. Focus Kills can be earned by doing a melee takedown, with up to three stored at once. This is effective when enemies are far away and you’re under heavy fire; it’s one of the few design quirks that enhances the game.

The other 20 per cent of the game is comprised of vehicle driving. There’s nothing too special here, as it’s arcade action all the way. Accelerate, brake, hand brake, and turn — it’s a control scheme that would fit Grand Theft Auto drivers, not Gran Turismo fans. Of course, the goal here is to just chase the bad guy and watch the environment go boom, so it gets the job done.

If Uncharted 2: Among Thieves taught us anything, it’s that a tried-and-true formula such as third-person cover-based shooting can feel new and exciting thanks to pacing and environment. Blood Stone’s developers have forgotten this, leaving only the middle section to have any real tension. Otherwise, it’s a pretty simple formula of move into a room, hide behind stuff, shoot 50 dudes, and repeat. Sure, you may move from place to place but there’s no real difference between archeological ruins and an enemy lair.

Blood Stone really comes alive in two middle sections: the chapter in Monaco, which involves breaking into a casino and stealing documents, and the chapter in Siberia, where Bond must destroy the source of biological weapons. The former brings a greater stealth element into gameplay while the latter offers unique situational challenges and time constraints to put the pressure on. Other than that, it’s a pretty blah shoot-and-hide fest.

It doesn’t help that the enemies are dumber than stormtroopers that have just smoked a bong. You can shoot one guy in the face and his buddy won’t even react. Other times, you’ll be in a fierce fire fight with a soldier, but if you stay in your cover position, he’ll just come walk toward you for an easy melee takedown. Perhaps developer Bizarre Creations’s budget was consumed by getting voice talent because there doesn’t seem to be much in the way of enemy strategy or desperation as we’ve seen in other games.

Blood Stone also only offers one solution to all problems, which is kill everyone in sight. In one section, I tried to put my Metal Gear Solid skills to the test by sneaking past all the guards in a room. I got to the goal, but the door wouldn’t open, and it’s not because there was a lock or keycode or anything like that; the game’s mechanics wouldn’t let me go into the next section without killing everyone first. You’d think a spy game would reward stealth, not eliminate it completely.

The driving sequences are fast and exciting, but terribly unforgiving. Make one mistake and you’re back at the check point for another go; old-school gamers will have flashbacks of muscle-memory repetition from 8-bit action game day. These sequences are essentially on-rails segments masquerading as driving. Yes, you control your vehicle, but there is a strict linear path, and if you deviate from it in any way, you’ll get a Game Over screen within seconds.

Because Blood Stone’s graphical strengths are in its environments (and because things look better when they’re speeding past you), these are also the best-looking segments of the game. Unfortunately, they always end with a cut scene, which leaves you back with plastic-molded characters talking out of sync with their voices.

Blood Stone was written by Bruce Feirstein, who’s written a number of things in the Bond universe including Everything Or Nothing and parts of the Brosnan set of films. Because of that, the script and story feel very much like a Bond film, with exotic locations and double-crosses. It does push the game forward — and in some cases, it’s the only reason to play through another room of generic soldiers shooting at you.

In fact, that’s probably the best way to sum up the game. For fans of James Bond — especially the Craig iteration — Blood Stone is worth picking up used or renting for a weekend (the campaign probably takes 7-to-10 hours, tops) because the story feels like a true Bond adventure. Otherwise, there’s no real reason to put that time and money into a mediocre third-person shooter with awful graphics.

By the way, I still haven’t figured out what the heck the title means in terms of the overall story. I’m not the only reviewer puzzled by this, and the only tie-in I can think of is Joss Stone’s last name. It’s not even a cheesy ultimatum thrown in the dialog, like Everything or Nothing or The World is Not Enough.

By Mike Chen
Tags: James Bond: Blood Stone, Video Game Review
This entry was posted on Saturday, November 27th, 2010 at 6:45 pm and is filed under Mike Chen, Video Game Reviews. You can follow any responses to this entry through the RSS 2.0 feed. Both comments and pings are currently closed.