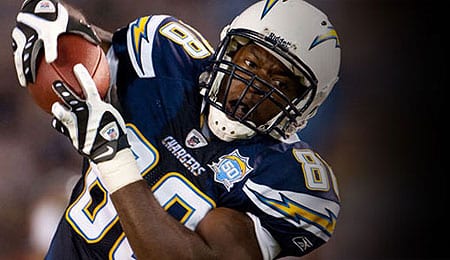 Kris Wilson hauled in a couple of passes Sunday, but it will take an Antonio Gates injury for him to be useful.

With Trevor’s PC in the shop this week, the NFL Power Rankings are on hold until next week. So in their stead, I thought I’d offer a few observations.

We had a Kris Wilson sighting on Sunday, as Antonio Gates’s backup (which is akin to being a screen door on a submarine, as far as Fantasy value goes) pulled in a pair of catches for 17 yards in the Chargers’ loss to Oakland. Wilson only managed four receptions all of last year, so by his standards, he’s having a banner year. I’m going to wait to see a bit more before I put him on my watch list. Let me get back to you on that…maybe around Ground Hog Day.

Arian Foster owners were undoubtedly expecting more from their stud last week against a middling Giant rush defense. But when New York built up a huge early lead against the Texans, the running game was rendered moot and Foster endured his worst showing of the season, rushing just 11 times for 25 yards. He didn’t exactly pitch in on the receiving end of things, either.

Unfortunately, things may not get any easier for Foster in Week Six, as he has to face the extremely strong rush defense of the Chiefs. Obviously, he remains a must-start, but I’ll be very surprised if he tops 75 or 80 yards.

Over in Cleveland, with both Jake Delhomme and Seneca Wallace hobbled with ankle woes, rookie Colt McCoy will start his first NFL game. And in a baptism of fire, he gets to face the Steelers, whose pass defense is only bettered by their rush defense. Will the Browns even put any offensive points on the board? It’s a reasonable question.

Jay Cutler returns to action this week, after sitting in Week Five with a concussion courtesy of the ten sacks he endured in Week Four. But you think he’d miss a chance to put up some serious numbers against Seattle’s swiss cheese pass defense? If his O-line can just do a slightly better job of protecting him, Cutler should go off this week, big time.

Great news for the Packers, as Aaron Rodgers (concussion) has been cleared and is expected to play against the Dolphins Sunday. Green Bay sure as hell needs him, given its lacklustre start to what was supposed to be a Super Bowl bound season. The fact that Miami boasts the NFL’s best pass defense makes this a very interesting match up of strength vs. strength.

We knew the Rams would be better this season, but the fact that they surpassed their 2009 win total by Week Four had to come as a bit of a surprise. Last week, St. Louis looked a hell of a lot more like it was 2009 when it got shelled by the Lions (there’s something I don’t get to write very often) 44-6. And in Week Six, the Rams square off against a schizophrenic Charger squad that, according to its 2010 pattern to date, is due to kick the shit out of St. Louis. But wait a second…did you know that San Diego has never won a game in St. Louis? Sure, we’re only talking about three visits, but it’s still food for thought. I’m by no means predicting an upset here, but it could be a closer game than you’d think.

Sam Bradford endured his worst NFL game yet in Week Five, and it’s hard to expect much of a bounce back considering he has no one to throw to right now. Donnie Avery went down in the preseason, and now Mark Clayton is done for the year. Danny Amendola has been a very popular waiver wire pickup this week in the wake of Clayton’s injury, but St. Louis just doesn’t have enough weapons for Bradford to succeed right now, and facing a very strong Charger pass defense won’t make things any easier.

Randy Moss enjoyed a nice debut in his second tour of duty with the Vikings, pulling in four passes for 81 yards – both season-highs – and adding a TD, but it wasn’t enough as Minnesota lost to the Jets on Monday Night Football. But let’s see how Moss fares against the Cowboys, who own a vastly superior pass defense than the Jets.

The Giants’ defense has stepped up, limiting their opponents to just 13 points in the last two weeks combined as they’ve bounced back over .500 through five weeks. This week, however, they’ll face Detroit, which has the sixth-ranked pass offense in the NFL. New York ranks second in pass defense, so this has the makings of a fun game. Expect Justin Tuck to be in Shaun Hill’s face all day long.

Kevin Kolb will likely start Sunday’s game against the Falcons, but wouldn’t you love to see Michael Vick get his chance? However, Vick’s injured ribs will probably keep him sidelined in Philly’s only matchup against Atlanta this season (unless, of course, the two teams square off in the playoffs, which is a possibility as each team looks like it will challenge for a post-season berth).

Over in Steel City, Ben Roethlisberger returns from his four-game suspension Sunday just in time to face a weak Cleveland pass defense. Pittsburgh’s pass offense – ranked dead last in yards (although that includes a bye week) – may finally get off the Schneid. Bring out your Steeler receivers!

Max Hall was hardly a world beater in his first start, but he did enough to guide the Cards to an upset over the Saints. Arizona is in its bye week, but Hall looks like a decent pickup for Week Seven against a porous Seattle pass defense. The fact that he may be getting a couple of his offensive weapons back next week makes him an even more sneaky start. Take a look if you’re in need of QB help.

By RotoRob
This entry was posted on Friday, October 15th, 2010 at 3:11 pm and is filed under Fantasy Notes, FOOTBALL, RotoRob. You can follow any responses to this entry through the RSS 2.0 feed. You can skip to the end and leave a response. Pinging is currently not allowed.