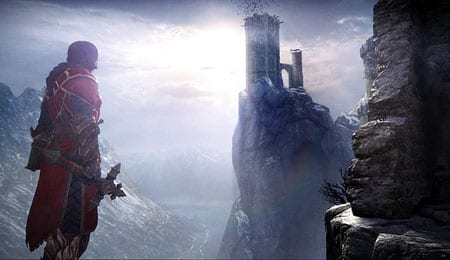 Yes, that’s a castle in the distance. That’s one of the few traditional Castlevania things in Lords of Shadow.

When Castlevania: Lords of Shadow was announced, the gaming community let out a collective groan. After all, 3D Castlevania attempts had languished in mediocrity, so why would this — the first for the current console generation — be any different? When word came out that Kojima Productions was brought on board to consult, expectations were raised, and early buzz started to build. God of War-style gameplay in the Castlevania world? It sounded like it might just be crazy enough to work, and after evaluating the final product, I’m happy to report that it does indeed come together, though there are certainly some kinks that get in the way.

From a pure graphical standpoint, Lords of Shadow has to be one of the highlights of the year. The amount of detail in the backgrounds rivals Uncharted 2 for exotic natural locales, while dynamic lighting makes damp, dark corridors equally foreboding and beautiful. Character models are extremely detailed and animation is fluid, so when you’re chaining together combo attacks with your combat cross, it’ll be brutal and graceful. Large-scale bosses are particularly impressive, especially when the camera is used effectively to convey the grandeur of their movements. Cut scenes show this off in a number of ways, as the influence of associate producer Hideo Kojima certainly shows. You won’t get any Metal Gear-length cut scenes, but things are more cinematic than any previous Castlevania game. It sets the mood and gets you ready for the journey ahead while pushing the somewhat questionable story forward.

One minor graphical annoyance: much of the game’s text is in Old English font, which makes it pretty much impossible to easily read. If you’re stuck with a smaller TV, this will prove to be particularly irritating.

The music is what you’d expect from a big-budgeted Castlevania title: a mix of epic orchestral motifs combined with haunting gothic melodies. The music also drops completely during select sections as a means to enhance the atmosphere.

Lords of Shadow boasts some big-name voice talent, including performances by Shakespearean-trained Patrick Stewart (X-Men, Star Trek: The Next Generation) and indie film favourite Robert Carlyle (Trainspotting). Carlyle, in the lead role as Gabriel Belmont, isn’t given much to do other than some obligatory “What’s going on?” lines in cut scenes. I can’t tell if Carlyle actually recorded the battle grunts for Gabriel, as they sound like a much different and angrier person (or someone that’s having irritable bowel issues). Stewart’s voice work is excellent, but it doesn’t quite seem fitting for his character, who is a seasoned warrior in search of hope (think Auron from Final Fantasy X). Stewart narrates the game, but does so with a gentler tone than the grizzled fighter that scales up giants to deliver death blows.

Lords of Shadow starts simply enough with two attack buttons (strong and range), a jump button, and a dodge/block button. This setup is the heart of the game, as it powers your essential combat with further combos unlocked to increase the brutality. It takes a few hours, but eventually you’ll get the use of light magic and dark magic, which are activated by trigger buttons. The use of either magic depends on the individual magic meter, which means that you’ll be toggling it on and off while fighting enemies and dodging attacks — oh, and you’ll also want to push the analog sticks in (left for light, right for dark) to gather orbs to fill up your magic meters.

Sound like it can get hectic? It certainly can, especially with the fast-striking attacks by some enemies as well as the sometimes poor camera angle. Once you eventually unlock all of the possible controls, it takes another few hours to really get comfortable with fighting, dodging, and activating magic all at once — and a lot of it does have to happen simultaneously, as another element called Focus (essentially a combo booster) causes enemies to drop a larger quantity of magic orbs. It’s a fine balancing act that can be difficult to grasp, but once you get it, you’ll be surprised at how fluid the whole thing can feel.

The game has its own quicktime events, and rather than button combinations, most of them are timer-based with a few using button taps or combinations of the analog and a button press. Some of these have sluggish responses, especially when they aren’t using Castlevania’s timer-based system. You’ll definitely find yourself wanting to toss the controller at the screen while muttering, “I hit those damn buttons” to yourself, usually when you first encounter a boss. It’s frustrating because the actual combat controls, though complicated at times, are fairly crisp, while these critical quicktime events can make the game seem more difficult than intended.

Is Lords of Shadow a God of War knock-off? Yes. There’s no getting around that, and the series known for platforming combat has turned into mostly a weapon-based brawler with light platforming intervals. Like God of War, you’ll move from section to section in a fairly linear path, pausing to fight off waves of hell-spawned beasts before climbing up some walls or solving some puzzles. The combat is visceral and comes with just enough variation through unlockable combos and a unique light/dark magic system that you won’t get bored even though levels tend to have repetitive enemies. If you want to play it as a pure button masher (hitting the Strong Attack button over and over), you can get through much of the game that way and not really be held back. For those that appreciate the stylized violence of combo attacks, you’ll have enough to work with and learn to spice things up. The violence (read: gore) isn’t quite as gratuitous as God of War, but that’s not necessarily a bad thing since Castlevania has always been more about atmosphere than blood.

The primary weapon is the combat cross, which is like a crucifix that can become the old trusty Morning Star from other Castlevania games. Why they didn’t just use a whip for continuity, I don’t know, other than the religious imagery of a cross beating up demons and unlocking secrets. Gabriel’s combat cross gets upgraded with a few features, such as a grappling hook and spikes that act as a saw. The grappling hook helps out during platforming and can be used during combat as well, but some of the other functions aren’t really implemented well. You’ll use them to get over one very specific type of obstacle and never really deal with it otherwise, which makes it kind of a throwaway upgrade rather than something significant.

One area where Lords of Shadow stands apart from God of War is the difficulty. This isn’t an easy romp, and while God of War often feels like a rewarding fight, Lords of Shadow can be too punishing for its own good (except for old-school gamers that like a repetitious challenge). This is particularly so in the first chapter of the game before health regeneration is unlocked, but even then the adversaries tend to be a challenge. This does affect the overall pacing of the game, and there are times when battles feel more like an exercise in RPG-ish level grinding or annoying repetition rather than bad-ass monster killing.

Lords of Shadow slows down when platforming sections hit. While the fixed camera view can be beautiful to look at, it can make platforming goals difficult to ascertain, and jumping can become a pain rather than a joy because you don’t have the best perspective to gauge the situation. When scaling walls and mountains, this becomes even more difficult, especially when the camera snaps into a different angle and it takes a second or two to figure out where Gabriel is and which direction he needs to go. The platforming is forgiving, and any accidental deaths will put you right before your ill-timed fall. However, it’s sluggish and doesn’t have the fluid nature of other recent major releases.

The fixed camera also provides another type of problem from time to time. You’ll get to enjoy the meticulously created backgrounds when the camera zooms out to the point where Gabriel is basically a red stick figure on the screen. This offers some tactical advantages, such as getting a wider view of where the enemies are. However, it also makes some things damn near impossible, such as when goblins lob grenades at you. In that example, you’ll have to pick up the grenades before they blow up, then toss them back at a breakable wall. Of course, if you can’t see the grenades, this becomes a problem, and there were times when I had to stand close to my 46″ LCD HDTV in order to figure out these small details.

You’ll forget about these quirks when you’re in the middle of combat or when the cut scenes show off the stunning graphics. When they rear their ugly head again, though, try to fight off the urge to roll your eyes and remember that it’s only a small portion of the game.

Castlevania: Lords of Shadow is a good game that fails to take it to the next level due to a number of smaller issues that detract from the fun combat, stunning graphics, and tremendous presentation. Given Castlevania’s spotty record with 3D games, perhaps this should be considered a big step forward. On its own, though (and really, you could take the name Castlevania off the title and it’d be the same game), it’s obvious that a lot of time and attention have been put into it. Had certain design elements been polished just a tad more, it would have taken this game from Good to Great.

By Mike Chen
Tags: Castlevania: Lords of Shadow
This entry was posted on Thursday, October 14th, 2010 at 3:09 pm and is filed under Mike Chen, Video Game Reviews. You can follow any responses to this entry through the RSS 2.0 feed. Both comments and pings are currently closed.