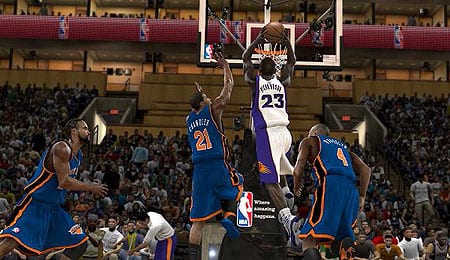 By putting Michael Jordan, almost universally recognized as the best individual player in NBA history, on the cover of its game, 2k Sports said everything you needed to know about its feelings regarding NBA 2k11 without uttering a word. The implication was clear, and the results are superb as 2k has done a tremendous job in creating the definitive basketball experience available on any platform.

Although 2k has streamlined things a bit with the all-new IsoMotion dribbling controls, there is still a sizable learning curve. In fact, NBA 2k11’s control scheme is complex enough that instead of including the moves in the instruction manual, you’re instead directed to a website with an 11-page downloadable PDF. To be fair, things have gotten more intuitive with all your moves controlled with the left stick and left trigger, but they’re still not easy.

The game also struggles at times with ball movement. Passing remains imprecise, which is then exacerbated by unrealistic defensive A.I. — players will actively deflect balls they have their backs to, particularly on outlet passes. Using icon passing (engaged by hitting the right bumper) alleviates some of this, but it’s not a cure-all. Shooting and defense feel pretty much the same as years past. That’s not surprising given both aspects are handled extremely well.

When it comes to creating a broadcast feel, NBA 2k11 has it nailed. I’ve long been critical of sports games for failing to capture the size/feel of stadiums. That isn’t the case here. The lighting, crowd reactions, camera shots and more all come together to create a nearly seamless recreation of watching an NBA game on television. The addition of dynamic crowds — fans roll in late at the Staples Center, a Nets-Pistons tilt doesn’t draw a full house and so on — is just another cherry on top.

Player animations continue to be exceptionally smooth and lifelike. The way players gather for shots, contest at the rim or dive for loose balls is great. Signature players are largely spot on, and it makes it feel different to play as them. Dwyane Wade seems like he glides across the court before suddenly accelerating for a bucket. Kobe Bryant creates separation on fadeaway jumpers. Yao Ming looks like he’s running in quick sand. There’s a lot of attention to detail here.

Visual perfection continues to elude 2k on the virtual hardwood, however, as certain players don’t look quite right, particularly during close ups. The coaches are also very hit or miss. Some look like reasonable facsimiles of their real life counterparts while others are way off.

Dynamic commentary makes a triumphant return for NBA 2k11 with Kevin Harlan and Clark Kellogg once again doing yeoman’s work in providing a ton of dialogue. They not only follow the action, but also discuss the results of previous games, upcoming contests, off-season storylines and more. As mentioned in my recent review of NHL 11, Harlan and Kellogg became the measuring stick in the world of video game commentary last year and they’re even better this time around.

Crowd reactions and the on-court sound effects (like the squeak of sneakers) add another layer of immersion while a diverse soundtrack may be the best in the series’ history.

Jordan’s inclusion is clearly this year’s biggest addition, and the game wastes little time in introducing you to the world of MJ. The first time you load up NBA 2k11 you’ll find yourself in the tunnel before Game One of the Bulls-Lakers NBA Finals. Jordan then turns and asks simply, “Are you ready?” This leads in to you playing that first game before any tutorials, menu screens or anything else.

Once you’ve finished that you’ll find that there’s plenty more Jordan to be found in the game as 2k was clearly intent on not simply using the Jordan likeness as window dressing. Those wanting to be like Mike will find the Jordan Challenges the place to be. Here 2k has painstakingly recreated ten classic encounters spanning MJ’s illustrious career, including games like his famous 63-point outburst in Boston or his series clinching performance against Utah in what was his final game with the Bulls.

As a longtime NBA fan that saw a good number of these games, I was absolutely floored by the amount of painstaking detail that went into them from the significant (fully licensed and recreated starting lineups) to the minute (commentary referencing previous series). It’s incredibly cool to see old favourites like Dominique Wilkins, Larry Bird and James Worthy brought into the modern video game world playing the style of basketball that made them Hall of Famers.

Unfortunately, 2k stopped with the starting five for all of Chicago’s historical opponents, which means teams will sub in faceless players. Most won’t be bothered, but my encyclopedic knowledge of some of those teams had me asking why Cliff Robinson was starting and not Kevin Duckworth, or Adam Keefe instead of Greg Ostertag (even Antoine Carr would’ve made more sense). And, if Danny Ainge was already signed up for the ’85 Celtics, why couldn’t he have been on ’92 Portland’s bench?

Nitpicking aside, the Jordan Challenges are a lot of fun, and the reward for completing them is being able to bring the rookie version of Jordan into the modern NBA in the My Player mode. I’m not really one to mix eras, but it’s a cool idea and is something decidedly different within a genre that is often derided for pumping out glorified roster updates every 12 months.

Outside of the Jordan factor, longtime fans will notice another significant change — the difficulty. 2k has ratcheted up the A.I. on both ends of the court, leaving behind the days of playing one-on-one and constantly probing for an opening to the rim. Do that in this year’s version and you’ll either turn the ball over or get it sent into the fifth row as shot blockers collapse the lane to eliminate easy baskets. Instead, NBA 2k11 rewards you for playing intelligent and fundamentally sound basketball.

Although the focus on creating a more realistic brand of hoops is appreciated, the developers seem to have gone a little overboard in some respects in an effort to make things tougher. The most notable example of this is the absurd number of passes that are deflected or intercepted during many games, some by defenders that aren’t even looking at you. The result is that you feel inclined to operate at a more deliberate pace, something that should have been a choice rather than a consequence.

On the plus side, the A.I. does an almost eerie job of recreating the way each team runs their offense so that playing the Heat, which runs a lot of isolation plays for Wade and LeBron James, feels different than playing the Lakers, who employ the triangle offense. It really helps give each contest a distinct feel rather than a bunch of squads in different uniforms running the same stuff.

NBA 2k11’s two primary returning modes are My Player and The Association (aka Franchise), and both have received some loving attention as well. After making its debut last year as a fun but lacking offering, My Player has been expanded to include more off-the-court activities such as endorsement deals and press conferences. These serve to shape how your player is viewed around the NBA, and they can also affect how crowds respond to him. They’re fun little additions.

The biggest problem I had with My Player last season was the rigid and unfair grading system, which was too limited and didn’t recognize basic elements of game flow such as switching on a screen. I’m pleased to say the grading process has been refined, but it still needs work. For example, the game now notates switching defensively with an arrow. This is good in theory, though in practice it’s often difficult to tell who the arrow is pointing to, leading to you guarding the wrong man. In turn, the CPU finds the open man that you didn’t realize was your responsibility for an easy bucket — grade down.

I also noticed that when the computer brings up the ball after a miss or turnover, the My Player coaching A.I. seems unsure as to who should be guarding who. This leads to situations where my created point guard is tasked with denying low post position to Tim Duncan, something that shouldn’t occur unless your opponent pushed the ball up court and you had to scramble to match up.

One last item worth noting is how incredibly overmatched your created player is early on as you’ll start with an overall rating in the low 40s. I realize 2k doesn’t want to make the journey too easy, but we are supposed to be creating future NBA stars and not fringe D-League talent. Here’s hoping they find a happy medium for NBA 2k12 so that we can create players that fall a little closer to John Wall’s ability level rather than Mark Titus’s (cue the Mr. Rainmaker video!).

The Association has also seen some significant improvements, primarily relating to A.I., as the computer seems to have a better understanding of roster composition than in previous years. That means no more clubs where the top four players all play the same position because the computer can’t see past a player’s basic ratings. The A.I. will still propose some one-sided deals, but overall there’s been a lot of improvement on that front so that fleecing the CPU is relatively rare.

Some additional areas have been tightened as well — player progression/regression seems more realistic, free agents have interests beyond just money and the ability to execute three-team trades has been added. Last year’s Wii-inspired menu has also been completely reworked, making it easier to navigate and cleaner to look at.

Online play continues to trend in the right direction, though there are still too many instances of disconnects, and even in games with minimal lag there’s still an adjustment to be made when it comes to timing things like the release of your shot. Plus, I still run into times where I get the dreaded “can’t connect to 2k servers” message. Lastly, I’d advise gamers looking to play straight-up, NBA-style basketball to visit forums or set up games outside of the random ranked matches as seemingly everyone is playing as Miami and nobody plays on-the-ball defense.

2k Sports has pulled off a major coup with NBA 2k11, dramatically improving nearly every area of the already highly regarded NBA 2k10 despite operating in an abbreviated development cycle. The Jordan content is great, but it’s ultimately just icing on the cake of what now ranks as the best basketball game ever made.

By Herija Green
This entry was posted on Friday, October 15th, 2010 at 11:17 pm and is filed under BASKETBALL, Herija Green, Video Game Reviews. You can follow any responses to this entry through the RSS 2.0 feed. You can skip to the end and leave a response. Pinging is currently not allowed.