Nathan Horton Off to a Blazing Start 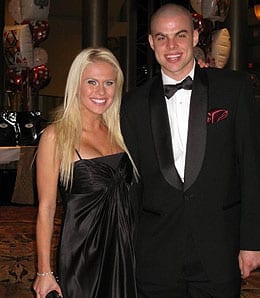 Tammy Plante, a hockey deity in her own right, must be proud of hubby Nathan Horton.

Nathan Horton owners are probably sitting down right now and crafting a letter to the NHL pleading that the league allows the Boston Bruins to play the remainder of their schedule in the Czech Republic.

A day after beginning the campaign with both Boston goals in a loss, Horton came through Sunday with another goal and an assist as the Bruins won 3-0 to salvage a split in their two-game set with Phoenix in Prague.

We ranked Horton as the 24th-best right winger heading into the season, but he’s sure looking better than that now.

He seems to have really clicked with linemates Milan Lucic and David Krejci, and as long as Horton can remain healthy – which has been a tall order the past two seasons – he could be headed towards a serious breakout campaign.

Horton was nearly a point-per game player last season in his final campaign with the Panthers, and the third overall selection in 2003 – still just 25 – could easily reach 70 points this season if he can avoid health woes. At the very least, it looks like this is one newcomer that will really help Claude Julien’s squad.

In between the pipes for the Bruins, Tuukka Rask was mediocre in the opener, so he was replaced by Tim Thomas for Sunday’s game. We predicted that Thomas could get his opportunities if Rask falters at all, and Sunday he was certainly up to the task, recording a 29-save shutout. Could we have a goaltender controversy brewing in Beantown already?

Thomas didn’t have a stellar campaign last season, slipping into a timeshare with Rask, and then he had to undergo off-season hip surgery. But it was only two seasons ago that Thomas enjoyed a career year with the Bruins, winning 36 games while recording a 2.10 GAA and .933 save percentage with five goose eggs.

Rask remains a must-own at this stage, but keep your eyes on this situation, as Thomas could skyrocket in value should he start to eat away at Rask’s hold on the job.

Back on offense, we predicted a big comeback effort for Lucic, and so far, so good, as he scored his first goal of the season Sunday after picking up an assist in the opener. Injuries decimated his 2009-10 campaign, so maybe this will be the breakout year we all expected for him last season.

The third member of this suddenly exciting line, Krejci, has logged three assists so far. The Czech native struggled last season, but he’s just 24 and still has some serious upside. The fact that he’s fitting in so well with his wingers has to have his Fantasy owners pretty upbeat about Krejci’s chances this season.

We expected Phoenix goalie Ilya Bryzgalov to face a lot of rubber this season, and so far, that’s been true to form, as he excelled in the opener, turning away 40 of 42 shots, while he faced another 37 shots Sunday, saving 34. Last season’s breakout goaltender looks back on track for another fine campaign.

Looking forward, Bryzgalov also now has the honour (?) of being the answer to a trivia question: which goalie allowed Tyler Seguin’s first NHL goal.

That’s right, the highly touted rook, ranked eighth on our pre-season list of top freshmen, potted his first goal Sunday as the 18-year-old beat Bryzgalov on a breakaway midway through the final stanza.

Phoenix captain Shane Doan has been in offensive decline for a couple of seasons now, but we still liked him as a top 25 right winger. Well, he failed to record a point in Prague, but did manage a minor penalty in each game. Still, the -2 the birthday boy (he turned 33 Sunday) took isn’t going to please his owners.

By RotoRob
This entry was posted on Sunday, October 10th, 2010 at 4:28 pm and is filed under HOCKEY, RotoRob. You can follow any responses to this entry through the RSS 2.0 feed. You can skip to the end and leave a response. Pinging is currently not allowed.