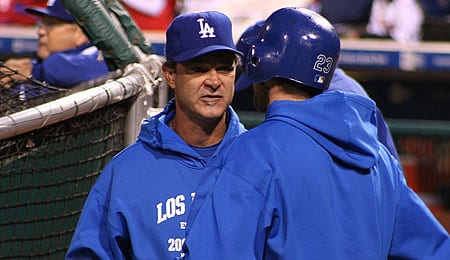 Will Don Mattingly be able to restore calm in Los Angeles next season?

What would Sunday be without a one hour look at the world of MLB through the eyes of Rich Wilson, Tony Cincotta and yours truly on the FantasyPros 911 show on Blogtalkradio?

We got the ball rolling by taking a look back at the August trade deadline and identifying some of the big winners and losers over the past six weeks. The consensus at the time was the Padres did very well for themselves by acquiring both Ryan Ludwick and Miguel Tejada. But in retrospect, who were the big winners in the trade deadline sweepstakes?

The Dodgers announced that Don Mattingly will be taking over the managerial reins in Los Angeles next season. Is this a positive move in light of the turmoil that has surrounded the Dodgers this season?

We took a quick look in our “Tale of Two Seasons” segment at Ben Zobrist, Aaron Hill, and Pablo Sandoval. What can we expect in 2011 from all three of these players and what happened this season to cause their demise from those lofty heights last year?

In our weekly review of two-start pitchers our focus this week was on Homer Bailey, Randy Wells, Derek Holland, Bruce Chen, and Chris Volstad. I continued my gambling ways this week and there’s more elk jerky on the line as I bravely went out on a limb and challenged Rich that Holland would wind up under 10 1/3 IP for the upcoming week.

Cole Hamels has enjoyed an incredibly successful season for the Phillies. Will this success vault him up the ranks of starting pitchers heading into 2011 drafts?

A fun and entertaining time was had by all and the full show can be found by clicking on the play button below.[podcast]https://rotorob.com/podcasts/Baseball_Podcast_Sep1910.mp3[/podcast]

By Tim McLeod
This entry was posted on Monday, September 20th, 2010 at 12:46 pm and is filed under BASEBALL, Podcast, Tim McLeod. You can follow any responses to this entry through the RSS 2.0 feed. You can leave a response, or trackback from your own site.