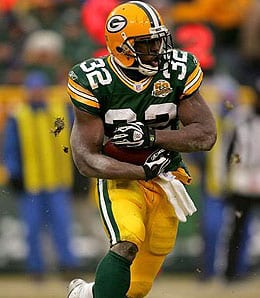 Re: Land of the Lost…backup RBs

I have a buddy that knows I use you as a “secret” Fantasy weapon. He asked me to pass along these 2 questions…he lost Ryan Grant and is curious to know who you think is his best pick up (Brandon Jackson isn’t an option): Peyton Hillis, John Kuhn, Bernard Scott or Rashad Jennings. Also, he wanted to know how you ranked these WRs going forward: Mark Clayton, Austin Collie, Eddie Royal, Johnny Knox and Legedu Naanee.

Our league scores one point per two receptions

Hillis’s surface numbers were solid in Week One (13 touches, 65 yards, one TD), but he fumbled twice and lost one in the red zone. That happened early in the third quarter and he didn’t have another carry the rest of the game.

Kuhn is interesting. I know Mike McCarthy likes him a lot, and the team trusted him enough as a ball carrier to only carry three traditional halfbacks. At the end of the day, I could see him coming pretty close to Jackson’s numbers, assuming Jackson doesn’t emerge as something more than he’s been during his first three-plus years in Green Bay.

I think Scott is a solid reserve, but I wouldn’t hold onto him unless I had Cedric Benson. It’s easy to average 5.8 YPC when you’re down 28 points and the defense is giving up stuff underneath.

Unless Maurice Jones-Drew gets hurt, I don’t see Jennings getting enough touches to be worth a roster spot, although he did enjoy a nice game in Week Two.

As for the wideouts, I’d go Naanee, Knox, Collie, Royal and Clayton. Of that group only one guy is a starter in a legitimately high-powered passing attack (Naanee). Chicago’s passing game has potential, so I like Knox as well. Collie had huge numbers in the fourth quarter of a game the Colts were losing badly and he didn’t do much in Week Two’s win — I think there are too many options for Peyton Manning to go to for Collie to sustain big production. Royal has upside, he’s one to watch for sure. Clayton has been a scrub so he needs to sustain to get me on board. Plus, just wait until NFL teams get some film on the Rams with Sam Bradford.

By Herija Green
This entry was posted on Monday, September 20th, 2010 at 4:45 pm and is filed under Dear RotoRob, FOOTBALL, Herija Green. You can follow any responses to this entry through the RSS 2.0 feed. You can leave a response, or trackback from your own site.