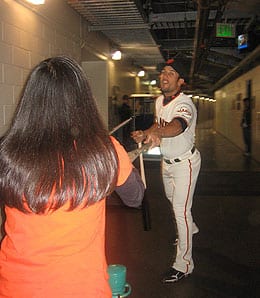 Andres Torres has made a very successful transition to full-timer.

I’m in a ten-team H2H league with a maximum 25-man roster.

The problem you’re faced with is very common to those playing in very shallow leagues and there really is no hard and fast answer to your question. You have a very solid roster, but as we all know, the hot hands will jump up and the waiver wire in your league will be constantly filled with options. The problem is getting the crystal ball to work for you and with the amount of talent available in your league that is truly a crap shoot.

Most of the options on your league wire could at any time out-produce your active roster but, and it’s a big but, if you have assembled a solid team, do you start gambling? The guessing game is a tough one to play. Matsui goes 0-fer two weeks or so and then out of the blue hits four or five homers in a short span. There is no way to guess if and when such occurrences will occur. Rotating players in and out of your lineup can have great results and at the same time can be an exercise in total frustration. I try to avoid playing this game unless I am backed into a corner and am desperate, but it can work and only you can make that determination as to when it’s time to throw caution to the wind.

By Tim McLeod
This entry was posted on Friday, July 30th, 2010 at 2:32 pm and is filed under BASEBALL, Dear RotoRob, Tim McLeod. You can follow any responses to this entry through the RSS 2.0 feed. You can skip to the end and leave a response. Pinging is currently not allowed.