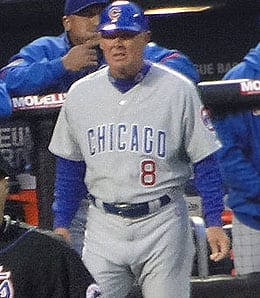 Mike Quade has the Cubs winning, but is not likely to get the job full-time.

Chicago Cubs manager Mike Quade is going to let rookie shortstop Starlin Castro have a seat on the pine for a couple of days after Sunday’s gaffed when got tagged out off first base after grounding into a force out that was just the second out of the inning. Oops.

We recommended Castro as his big July wound down, and it was a good call as he continued to rake in August (.336), even though he failed to homer, drove in just nine runs and went an abysmal 1-for-5 on the basepaths. What we need to remember is that this kid is just 20, and like many youngsters his age, he’s prone to mental errors like what happened Sunday. Good for Quade to have the balls to sit the kid down for a couple of games to let him refocus and owners in daily leagues will need to make an adjustment to their lineups. Having said that, I’m still expecting a big finish from Castro, so if he’s been dumped in your league — which is possible depending on how shallow a league you’re playing in — and you need a boost in BA, don’t hesitate to add the youngster.

Speaking of Quade, he’s 8-3 since taking over from the retired Lou Piniella, but I’m glad to see — for the sake of long-suffering Cub fans at least — that the team hasn’t simply removed the “interim” tag based on Quade’s early results. GM Jim Hendry apparently prefers to hire someone with managerial experience (Fredi Gonzalez and Eric Wedge are possibilities), but I don’t know if I agree with that approach. Having a well-travelled man didn’t work for the Cubs under Don Baylor, Piniella and a host of others. And this approach would likely mean that favourite son Ryne Sandberg – supposedly being groomed for this job – is not a candidate.

Still with the Cubs, how about the rebound season that Geovany Soto has quietly compiled? Yes, injuries have been a bit of a problem, but our pre-season No. 8 catcher has been right about where we expected him to be, perhaps even a bit better. Soto homered and drove in two runs Sunday, marking the second straight game he’s recorded an extra-base hit as his pop is coming alive again. Overall, he’s improved his extra-base power this year while quietly putting up a 910 OPS, which would rank him first among catchers if he had enough plate appearances to qualify for the batting title. Why is Soto still available in quite a few leagues?

How about that impressive first big league start for Matt Fox, who beat the Rangers on Friday night in an emergency start for the Twins? His reward was to be DFAed Sunday, so he’ll have to clear waivers to be sent back down to Triple-A. At the age of 27, Fox isn’t considered a top prospect by any means, but at the very least he showed he deserves a longer look, which he clearly won’t get with the Twins, at least this season. Fox has had a decent season in Triple-A, going 6-9, 3.95 in a swingman role for Rochester. He’s not overpowering, usually throwing his fastball in the 88 to 92 mph range and considering that he’s given up just over a hit per inning, his best-case scenario is as a long reliever in the bigs. But for one night at least, Fox played an integral role in a division race.

On Sunday, Ryan Dempster took a second straight beat down, and has now given up seven runs in consecutive starts. Ugh. We pegged Dempster as a top 30 starting pitcher this season, and generally speaking he hasn’t been far off, likely performing at top 40 levels. But considering it was the Pirates and Mets that shredded him in his last two outings, I’d be worried if I was a Dempster owner. The unfortunate part of these recent woes is that he was really rolling in August before the Pirates pillaged him in his final start of the month. Against the Mets on Sunday, he was spotted two leads that he couldn’t hold. Overall, he’s surpassed his win total from last season, but pitching on a poor Cubs’ squad he’s also reached double digits in losses for the first time since 2002. Still, Dempster has shown the finest command of his career this season, and if that’s a trend that continues, there’s no reason to think he won’t remain a solid starter for several more years.

Back at the end of June, we talked about some possible post-hype bargains for 2011. One of them, Matt Wieters, is showing signs of life after a poor August. He’s hit in seven straight games with four doubles and five RBI, raising his BA 14 points up to a more respectable .255. Wieters has set a new career high in homers this year and he’s also improved his walk rate, something that bodes well for a BA spike in the future, but we’re still waiting for that serious offensive explosion from this previously overhyped prospect. Don’t worry – it’s coming. Whatever you do, don’t give up this 24-year-old, for the best is yet to come and I think he’s one of the players that will benefit most from new manager Buck Showalter’s guidance.

As a final note, don’t forget that Roger Clemens is being arraigned today (Monday) on charges of lying to Congress. Be sure to check Tuesday’s news wire for all the “juicy” tidbits about this latest ugly chapter in the Rocket’s career.

By RotoRob
This entry was posted on Monday, September 6th, 2010 at 4:07 pm and is filed under BASEBALL, Fantasy Notes, RotoRob. You can follow any responses to this entry through the RSS 2.0 feed. You can skip to the end and leave a response. Pinging is currently not allowed.