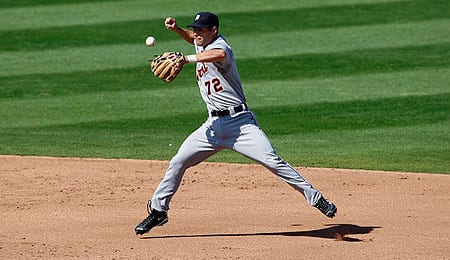 Injuries galore in Detroit have opened up a chance for Scott Sizemore to play regularly again.

The non-waiver trade deadline is quickly approaching and an endless stream of rumours greets us each and every day. The hype reaches incredible levels as we approach the trade deadline, but very rarely does it live up to the expectations. We will inevitably see some wheeling and dealing this week, but has the biggest trade already transpired (the Cliff Lee–Justin Smoak deal between the Rangers and Mariners)? Single league formas are most likely to be affected by this week’s activity, so keeping an eye on the trade news is imperative to improve your chance for the stretch run. If you snooze this week, you could really lose in single league formats.

Without further ado, let’s take a look at some of this weeks waiver wire options:

Scott Sizemore, 2B, Detroit Tigers: The Tigers have gone through a week from hell. First, Brandon Inge goes down with a broken left pinkie followed by the news Saturday that Magglio Ordonez is lost for six-to-eight weeks with a fractured ankle. Toss in Carlos Guillen and his right calf strain and poor Dave Dombrowski is going to wear out his cell phone. The recently recalled Sizemore can play both second and third so expect steady playing time over at least the short term. He struggled in his first go-round with the Tigers this season, but down on the farm at Triple-A Toledo, Sizemore managed a stellar .329 BA with six homers and 19 RBI in 167 at-bats. He is a solid option in AL-only formats and should be on the radar in standard mixed leagues.

Jack Cust, OF, Oakland Athletics: It’s been a season of struggles for the all-or-nothing Cust, but over his past ten games he’s been on fire, smacking six long balls with 15 RBI and compiling a superb .364 BA. Don’t expect the strong BA to be sustained, but as evidenced by his combined 84 homers over the past three seasons, the power is very real, making him a great acquisition in all formats.

Domonic Brown, OF, Philadelphia Phillies: How can you ignore the on-going Jayson Werth trade rumours? With every team other than the Pirates and Royals seemingly a possible destination, you have to think the odds are very good that Werth will be on the move this week. This brings us to the 22-year-old phenom Brown. The Phillies have stated that they won’t bring the kid up unless he’s ready to be an everyday player, but posting numbers of 19 homers, 59 RBI, 14 thefts, and an incredible .331 BA combined between Double-A and Triple-A leads us to believe that he’s as ready as he’s going to get. Brown makes for a great speculation pick in all formats heading towards the trade deadline.

Starlin Castro, SS, Chicago Cubs: It’s time to revisit Castro. Since the beginning of July, the 20-year-old phenom has really stepped it up, batting .389 with one homer, 12 RBI, 10 runs scored and three thefts. He’s got his season average up to .308 and is currently owned in 59 per cent of CBS leagues, so there’s an opportunity to upgrade your Fantasy middle infield here. Castro’s great batting average potential makes him a solid option at shortstop in redraft leagues down the stretch.

Ryan Raburn, 1B/2B/OF, Detroit Tigers: Did I mention that the Tigers had a really bad week on the injury front? Raburn, the likely beneficiary of the Ordonez injury, managed to smack 16 big flies in only 261 at-bats last season and, combined with his positional flexibility, makes for a solid option in all formats.

J.J. Putz/Matt Thornton, RP, Chicago White Sox: The White Sox are in the midst of a pennant race and Ozzie Guillen finally lost his patience with incumbent Bobby Jenks after back-to-back terrible outings last week, going to the bullpen-by-committee approach. We’re still waiting to see who gets that first opportunity, but if you need saves I’m betting on Putz — who is enjoying an amazing season — getting the first opportunity.

Other options of interest this week:

Sean O’Sullivan, SP, Kansas City Royals: The Royals did very well in terms of the return they got from the recent trade of Alberto Callaspo. The glut of middle infielders is thinning out and they managed to procure a young pitcher with considerable potential. What’s up in Kansas City — making a deal that actually makes sense? In AL-only leagues, go ahead and spend some of that FAAB cash this weekend on O’Sullivan.

Alberto Callaspo, 3B, Los Angeles Angels: They’re doing a new dance in Anaheim and it’s called the Callaspo. After enduring months of mediocrity from Quad-A Brandon Wood, it’s time to see what a real bat can do at the hot corner for the Halos.

Rajai Davis, OF, Oakland Athletics: Ryan Sweeney is gone for the year and although Davis is currently dealing with a minor hamstring issue, the playing time should be there down the stretch and with it will be the opportunity to pad those stolen base numbers.

Barry Enright, SP, Arizona Diamondbacks: This young right-hander has been quietly getting it done out in the desert. His first four starts were all of the quality variety, making him an interesting gamble in NL-only leagues.

Michael Morse, OF/1B, Washington Nationals: He has a ton of power but no current place in the Nats batting order to display it. Now if Adam Dunn gets moved at the deadline…

Miguel Cairo, 3B, Cincinnati Reds: Scott Rolen’s lingering hamstring issue has temporarily opened up more playing time for Cairo and he’s responded in fine form. Okay, so he’s a band aid solution at best, but for the next couple of weeks Cairo could provide relief.

Brian Duensing, RP/SP, Minnesota Twins: It only took the Twins four months to determine that Nick Blackburn wasn’t the answer. Duensing’s work down the stretch last year, which included five wins and solid 2.73 ERA, bodes well for both the Twins and Fantasy owners looking to improve their pitching in AL-only leagues.

Craig Kimbrel, RP, Atlanta Braves: The Braves “closer-of-the-future” possesses some serious heat. Billy Wagner is no spring chicken and has been struggling lately, making Kimbrel an intriguing option in the Atlanta pen down the stretch.

Alex Gordon, 3B, Kansas City Royals: The Royals still believe. Personally, I don’t, but in single league formats, you could do worse. Brandon Wood, anyone?

By Tim McLeod
This entry was posted on Sunday, July 25th, 2010 at 4:42 pm and is filed under BASEBALL, The Wire Troll, Tim McLeod. You can follow any responses to this entry through the RSS 2.0 feed. You can skip to the end and leave a response. Pinging is currently not allowed.