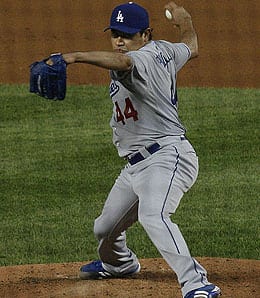 Do you think I should trade Wandy Rodriguez and Vicente Padilla for Dan Haren? It’s a ten-team, non keeper league and the only thing keeping me from taking it is that we get +10 for wins and -5 for losses.

This is an interesting question and an interesting format, Daniel. I think that to help resolve your conundrum, a closer look at the numbers is in order. Let’s take a quick scan at the stats since the All- Star break.

Rodriguez has certainly turned things around. In his past four starts, he has amassed three wins with the only blemish being Friday when he pitched a gem only to see Matt Lindstrom cough it up in the ninth. In his past three starts, Rodriguez has struck out 23 in 21 1/3 IP. I don’t see any reason why he won’t continue his rebound down the stretch.

In his past four starts, Padilla only has one win to show for some outstanding efforts. He has a one-hitter and a two-hitter and has only allowed three earned runs in those four starts. Toss in the 21 strikeouts in 26 IP and he has been a solid and pleasant surprise for the Dodgers.

Moving forward, let’s take a closer look at Haren. He’s 0-3 and has allowed 17 earned runs in his five starts since the break. The strikeout numbers have been strong, but I’m afraid the move from the National League to the American League combined with pitching for a struggling Angel team does not bode well for Haren for the duration of 2010.

I think the numbers pretty much speak for themselves, Dan. Your odds of success are much better with Rodriguez and Padilla than if you made a move for Haren. If you need a push in the wins department, looking to the waiver wire would be a much better solution to your current problem.

By Tim McLeod
This entry was posted on Wednesday, August 11th, 2010 at 12:26 pm and is filed under BASEBALL, Dear RotoRob, Tim McLeod. You can follow any responses to this entry through the RSS 2.0 feed. You can leave a response, or trackback from your own site.