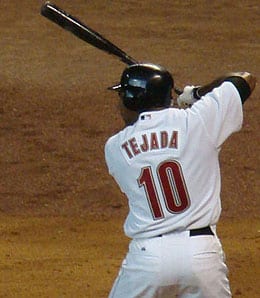 Miguel Tejada has been inconsistent since arriving in San Diego, but the Pads keep winning.

After a couple week’s absence of the Power Rankings we’re back, and the most surprising team is the Toronto Blue Jays with 59 wins, enough to be a contender in other divisions, but in baseball’s best division, the Jays sit 10 games back in the AL East, trailing the Yankees, Rays, and Red Sox. Another surprise is that the race for the NL Central between the Cardinals and the Reds is still so close. I expected the Cardinals to take a bigger lead after the All-Star break, but it seems as if the Reds deserve more credit than they were given as they are showing no signs of packing it in.

Biggest Jump: The Toronto Blue Jays jumped from 18th to 14th spot after winning six of eight to finish off July and continuing their solid play into August, until this week when they ran into a Red Sox team that has dominated them all season.

Biggest Drop: Both the Colorado Rockies and the Los Angeles Angels slid four spots each, the Rox from 11 to 15, and the Angels from 12 to 16.

1. (1) New York Yankees, 70-43: Despite losing six of ten games this month, they still hold a slight lead over the Rays, who have failed to take advantage. However, the Yanks better smarter up because the Rays are right on their backs. Yankees need to get Andy Pettitte back soon to help hold Tampa Bay and Boston off.

2. (2) Tampa Bay Rays, 69-45: After going 11-2 between July 21 and August 3, they lost their groove and dropped five straight and six of eight. However, they’re still just a game and a half behind the Yankees, and had their hopes buoyed after winning their series against the Tigers as David Price set the tone by earning his 15th win in the opener Monday.

3. (4) Atlanta Braves, 66-48: After winning their last two series at home, including three of four against the Giants during which they beat Tim Lincecum to take the opening game, the Braves have increased their home record to an MLB-best 39-15.

4. (3) Texas Rangers, 65-48: Texas has been spinning its wheels lately, losing recent series against division rivals the Angels and Athletics, and then blowing a chance for a two-game sweep of the Yankees Wednesday, after their 6-1 lead turned into a 7-6 loss. The big bats of Michael Young and Josh Hamilton weren’t enough for Texas to earn what would have been a big-time statement win.

5. (5) San Diego Padres, 66-46: With their recent acquisitions of Miguel Tejada and Ryan Ludwick, the Padres hope to stay atop the NL West over the Giants, Dodgers, and Rockies.

6. (6) Boston Red Sox, 66-49: The BoSox are the best third place team in the majors with a record that would be good enough to lead any other division. The good news is that Boston is still in the running for first place in the AL East or the Wild Card. However, the Sox are still suffering from many injuries, and the loss of Kevin Youkilis really hurts their chances. On the plus side, Dustin Pedroia will be back next week, and that will provide a big boost.

7. (7) St. Louis Cardinals, 64-49: After finishing off their sweep of the Cincinnati Reds Wednesday, the Cards have regained the division lead, although it’s pretty slim at just one game. Albert Pujols is heating up at the right time, having gone 16-for-34 with four homers and 12 RBI in August.

8. (8) Cincinnati Reds, 64-51: The Reds are now a game back of the Cards after being swept, they now host a decent Marlin club before heading out on a nine-game road trip through the NL West against the Diamondbacks, Dodgers and Giants. If the Reds are going to regain the division lead, Brandon Phillips, mired in a 4-for-28 skid, needs to show more leadership with his bat than he did with his mouth this week.

9. (10) San Francisco Giants, 65-50: Lincecum has lost both of his August starts, but he should be able to bounce back to help his team inch closer to division-leading San Diego.

10. (13) Minnesota Twins, 64-50: The Twins are 15-5 since July 21 and are showing the AL Central how much they want to win after destroying division rival Chicago 12-6 Tuesday night thanks to a five-homer onslaught. The Sox came back Wednesday with a convincing win of their own to square the series and the division, setting up a huge game Thursday in the final match up of the series. The winner walks away with a very slim division lead of one game.

11. (9) Chicago White Sox, 64-50: The White Sox dropped three of four against one of the worst teams in the league, the Baltimore Orioles, but have bounced back to split the first two game against Minnesota to move back into a share of the division lead. Regardless of who wins this rubber match, this battle is far from over as the teams still have six games left to play, including three in Minny next week.

12. (14) Philadelphia Phillies, 63-50: Having gone 5-4 since July 22, the Phils have jumped back into contention, only 2.5 games behind the Braves, with a series in New York against the Mets on tap for this weekend. The addition of Roy Oswalt has helped energize this team, and he earned his first win as a Phillie on Wednesday.

13. (15) Los Angeles Dodgers, 59-55: The Dodgers have scored 37 runs in their five wins this month, but just eight in their five losses, which includes three shutouts. On Thursday, the Dodgers will send Clayton Kershaw to the mound to try to take the rubber match of their series in Philly; unfortunately, Kershaw has dropped four straight against the Phils.

14. (18) Toronto Blue Jays, 59-54: The Jays had a bit of winning run there to finish off July, however, they are in danger of being swept at home against the Red Sox on Thursday after getting bitch-slapped 10-1 Wednesday. If the Jays weren’t 2-9 against Boston this season, they’d likely be battling for the AL Wild Card and might even still have a shot at the division title.

16. (12) Los Angeles Angels, 59-57: I cannot believe the Orioles swept the Angels last week; they were lucky the series was in Baltimore, or else the team may have lost the last of its fans. Hell, even the Rally Monkey might have taken his bananas and left. At least the Halos turned it around, winning their series against the Tigers and then finishing up a sweep of the Royals on Wednesday. One of the key changes that has helped this team turn things around is the shifting of Bobby Abreu into leadoff. He’s recorded three straight multi-hit games to help LA pull back within 7.5 games of Texas in the AL West.

17. (19) Oakland Athletics, 57-56: Despite their bats not backing them up, the A’s have gotten great pitching, giving up 25 runs in ten games this month. It was Dallas Braden’s turn Wednesday, as he tossed a four-hitter for his third win in four starts. He’s rolling now, and there’s a good chance he’s still available in your mixed league, so consider picking Braden up in all formats.

18. (16) New York Mets, 56-57: The Mets have only won one of eight series since the All-Star break. They have a chance to win another series Thursday afternoon at home against the Rockies, but they’ll have to do it without closer Francisco Rodriguez, in police custody after being charged with third-degree assault.

19. (20) Florida Marlins, 56-56: The Marlins started August awfully, losing five straight, but have turned it around, winning their next three behind possible Rookie of the Year, Gaby Sanchez, who has returned from a hammy issue that sidelined him last weekend.

20. (17) Detroit Tigers, 55-59: The Tigers are 3-8 this month, and are beginning to lose all hope of beating out the Twins or White Sox for first place in the AL Central. If you can believe it, just over a month ago this team led the division; now, they’re ten games out.

21. (22) Milwaukee Brewers, 53-62: Prince Fielder, who was not deal away before the non-waiver deadline, already has 12 RBI in nine games this month.

22. (23) Washington Nationals, 49-65: After having not started for three weeks, Stephen Strasburg was torn apart Tuesday for six earned runs in 4.1 innings. Worse yet, the Nationals are currently on a four-game slide that has all but guaranteed they’ll finish in the NL East cellar.

23. (26) Houston Astros, 48-65: The Astros started to climb up the standings after winning eight of nine over the end of July and beginning of August, but since then have lost six of seven games to fall four games behind the third place Brewers in the NL Central. Brandon Lyon’s meltdown Wednesday allowed Atlanta to escape Houston with a series win.

25. (25) Cleveland Indians, 47-67: Shin-Soo Choo is virtually the only offensive bright spot on the team after they traded away some of their stars.

26. (24) Kansas City Royals, 47-67: The Royals are 8-18 since the All-Star break, so there’s not really much to say here, especially since now the Yankees are coming to town to make life even more miserable in KC.

27. (28) Arizona Diamondbacks, 46-69: Th D-Backs look like a brand new team, having won eight of 11 in August. Kirk Gibson has this power-hitting club playing pretty good ball lately, so watch for Zona to play the spoiler role down the stretch.

28. (27) Seattle Mariners, 44-71: How about Seattle’s offense? This team ranks dead last in the majors in batting average, homers, RBI and hits. On the bright side, Chone Figgins is hitting much better in the second half.

29. (30) Baltimore Orioles, 40-74: With the O’s going 8-2 during their first ten games in August, I’d say they weren’t one of the worst teams in baseball this season, if I didn’t know any better. They better thank Buck Showalter with everything they got, which still isn’t much, but at least hope springs eternal in B-More for the first time in a long while.

30. (29) Pittsburgh Pirates, 39-74: The Pirates have taken over last place from the Orioles since Baltimore learned how to win all of a sudden. Pittsburgh is 3-7 this month, almost the complete reverse of the Orioles since they’ve turning things around. Thursday, the Pirates will try to avoid a season sweep at the hands of the Padres.

By Trevor Blake
Tags: MLB
This entry was posted on Thursday, August 12th, 2010 at 1:52 pm and is filed under BASEBALL, MLB Power Rankings, Trevor Blake. You can follow any responses to this entry through the RSS 2.0 feed. Both comments and pings are currently closed.