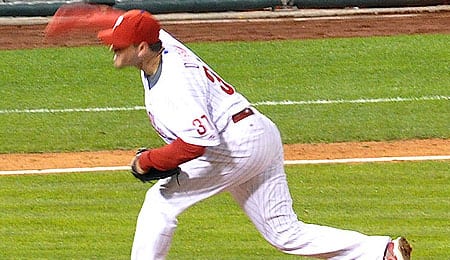 In his current role, Chad Durbin is a lot more valuable to the Phillies than to your Fantasy team.

Chad Durbin, who was probably last useful in 2008, is having a better season than last year, but he’s been getting progressively worse as the season has worn on. He’s actually enjoying his highest full-season strikeout rate and the best command of his career, but in his long relief role, he just doesn’t offer enough value to be Fantasy worthy. A couple of wins, a few holds, a smattering of strikeouts and an ERA and WHIP that won’t kill you isn’t enough to temp even deeper NL-only league owners into using Durbin, I’m afraid. And now that Roy Oswalt has been added to the Phillie rotation, there’s even less chance that Durbin will get a chance to start any time soon.

The American League’s worst defensive team was up to its usual tricks Wednesday as two errors by the Royals led to a four-run sixth inning for Oakland – all the scoring the A’s would need to wrap up a 4-3 win. With the loss, KC has dropped into a tie for last place in the AL Central with the Indians and its play against Oakland (1-6 for the season) is just one reason why this team is once again sitting at the bottom of the division standings.

But besides the shoddy glovework and inability to beat mediocre teams like the A’s, one of the main reasons the Royals are struggling through another lost season is their lack of pop – they’re one of just five teams in the AL that has a sub .400 slugging percentage. Look no further than their currently punchless and inconsistent clean-up hitter, Jose Guillen, a player the Royals would have loved – but failed – to move at the deadline. While Guillen did drive in a run on a fielder’s choice Wednesday, he took another 0-for-4 and has gone hitless in five straight games.

It’s now been over two weeks since he managed a multiple-hit game and his production, with two homers and 12 RBI since the beginning of July, has fallen off the table. Remember that this is a guy who was an early season waiver wire darling when he pounded seven homers, drove in 19 runs and hit .304 in April. But other than a big June (three homers, 17 RBI, .340), Guillen’s been pretty useless, and that’s why he’s winding up on the wire in nearly a third of all leagues now.

Overall, it’s been a better campaign than last season’s injury-prone effort, but unless Guillen goes on one of his streaks, there’s no point in wasting your time on him right now. Send him packing and pluck someone off the wire that’s rolling. And if Guillen starts heating up, give him another look.

By RotoRob
This entry was posted on Thursday, August 5th, 2010 at 2:18 pm and is filed under BASEBALL, MLB Today, RotoRob. You can follow any responses to this entry through the RSS 2.0 feed. You can leave a response, or trackback from your own site.