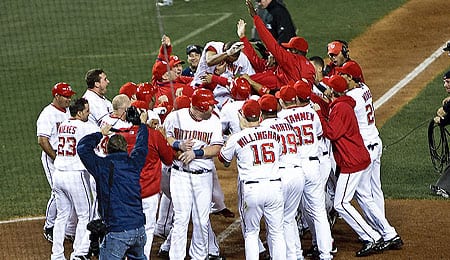 Justin Maxwell won over his teammates last year with a game-winning grand salami.

It’s that time of the year when we review my annual rite of spring, the infamous “’Tis a Marathon, not a Sprint” spiel. We’re now closing in on the completion of two weeks of play in the 2010 season and, yes, as always there are players that are struggling out of the gate. Don’t let panic mode set in and get the better of you. Will Mark Teixeira be batting .100 with no homers come July? Will Francisco Rodriguez make it through May with no saves? Highly unlikely scenarios. Take a deep breath and settle in for the long haul. The slumping vets will turn it around. If you chose to panic, there are owners in every league that are always more than accommodating when it comes to helping you with your early season dilemmas – a situation that usually leads to serious regret down the road. Just focus on the better days ahead and repeat after me, “’Tis a Marathon, not a Sprint.”

For now, let’s try to find some waiver wire assistance for your Fantasy squads heading into Week Three.

Justin Maxwell, OF, Washington Nationals: The 26-year-old Maxwell was recalled from Triple-A Syracuse Thursday and, in his second start managed his first homer and three RBI of the 2010 season. Down on the farm in 2009, he put up 13 homers and 35 thefts, making him a very intriguing option as a power-speed guy. Willie Harris is not the future in Washington and any early success from Maxwell bodes well for a long stay in the nation’s capital.

Jose Guillen, OF, Kansas City Royals: Is there anyone currently swinging a hotter stick than Guillen? When healthy, he has proven to be a solid offensive contributor and with the blood clot problems of 2009 behind him, Guillen has jumped off to a great start in 2010. In 44 at-bats, he has hit five long balls, driven in nine runs, and is batting .341. Guillen has hit more than 20 homers and driven in 80 runs five times in his career, so the history is there, as is the health currently, so grab him quick in all formats if he’s still available.

Daisuke Matsuzaka, SP, Boston Red Sox: Matsuzaka is currently rehabbing at Triple-A Pawtucket and has yet to yield an earned run in a pair of starts. After the second start, Dice-K proclaimed himself ready and while he does have one more rehab start scheduled this week, barring a setback he should be looking at a return to the Sox around April 28. Matsuzaka is currently owned in only 43 per cent of Yahoo! leagues, so go ahead and get the jump on the competition if he’s available in your league and make the move to acquire him now.

Greg Smith, SP, Colorado Rockies: The 26-year-old southpaw is currently filling in for the oft-injured Jeff Francis as the fifth starter in a strong Colorado rotation (yes, it feels weird to write that). Smith’s great 2008 rookie campaign was followed up by a disastrous 2009 in which he spent the entire year on the DL dealing with myriad shoulder issues. In two starts this year, the forgotten man in the Matt Holliday deal has struck out 13 in 12 IP and allowed only two walks in each start making him a fine acquisition in both dynasty and NL-only leagues.

Alex Gonzalez, SS, Toronto Blue Jays: Yes, he’s Alex Gonzalez, but in a Fantasy world that is seriously lacking in shortstops he should be of interest. Gonzo is off to a great start, slamming four homers with eight RBI and a .333 BA through 51 at-bats. Is it sustainable? Probably not, but get him rostered in all formats and ride him while he’s swinging the hot stick.

Jensen Lewis, RP, Cleveland Indians: Lewis is off to a great start in the Tribe bullpen and in 5 2/3 IP has two wins and a stellar 1.59 ERA and 0.88 WHIP. He’s a great addition in leagues that use the holds category and with Chris Perez being a tad shaky early on don’t rule out the potential for saves. Lewis did manage to accumulate 13 saves back in 2008, so it’s not like he hasn’t had success in the closer role in the past.

Scott Lewis, SP, Cleveland Indians: So many Lewises, so little bench space. Let’s file this one under long-shots for standard mixed leagues, but a reasonable consideration for those of us playing in deeper dynasty and AL-only leagues. Lewis missed most of the 2009 season dealing with elbow problems, but in his first start this year at Triple-A Columbus, he fanned 10 while only allowing two hits and one run over six innings. Taking a quick scan at the current Tribe rotation, the odds are very good Lewis will get the call sometime down the road. If you have the available bench space in your league, an early acquisition and stash could provide great value down the road.

Matt Harrison, SP, Texas Rangers: The 24-year-old southpaw has allowed only one earned run in each of his two starts and has nothing in the win department to show for it. In 13 IP, he has surrendered 11 hits and two walks while chipping in seven strikeouts. The Ranger offense will come to Harrison’s rescue at some point and offer him some run support, so he should be added in AL-only and deeper formats and put on the radar in standard 12-team leagues.

Ryota Igarashi, RP, New York Mets: This week the Mets announced that the 30-year-old Igarashi has been moved into the set-up role. He brings mid-90s heat and in 5 2/3 IP thus far has allowed two hits, four walks and no earned runs while striking out three. The former Yakult Swallow managed 29 holds last year in a set-up capacity and makes for a fine addition in AL-only leagues and leagues that count holds. And yes, I do dream of NPB players when I close my eyes at night, thanks for asking.

Kevin Gregg, RP, Toronto Blue Jays: Jason Frasor is now officially down for the count in Toronto as Cito Gaston — to no ones’ surprise — announced that Gregg has officially been awarded the ninth inning duties. In 5 1/3 IP, Gregg has already racked up three saves, but more impressively, has not walked anyone. In weekly transaction leagues, be prepared to spend some of those FAAB dollars this weekend if he’s still available in your league.

Fernando Rodney, RP, Los Angeles Angels: A strained back suffered by incumbent Brian Fuentes has thrust former Tiger Rodney back into a closer role. As of this writing, it appears Fuentes is on target for a quick return from his DL stint, but handcuffing him with Rodney would be a prudent move. Since assuming the role for the Angels, Rodney has now pitched three perfect innings with three saves and a couple of strikeouts, proving to be a more than capable replacement. Could he retain the gig when Fuentes returns? It’s not inconceivable.

John Baker, C, Florida Marlins: Baker is currently sporting a phenomenal .367 BA and has driven in six runs for the Marlins. He is in a platoon situation with Ronny Paulino, but in two-catcher leagues there is no reason for Baker to be available. He is currently owned in only 11 per cent of Yahoo! leagues, so grab him now before the rest of your league mates figure this one out.

Scott Podsednik, OF, Kansas City Royals: Pods is currently hitting everything in sight and is off to an incredible 18-for-41 start with six thefts. If you feel the need for some cheap speed, grab him quick in all formats while he’s still available.

Jaime Garcia, SP, St. Louis Cardinals: The 23-year-old southpaw has bounced back amazingly quick from 2008 Tommy John surgery. In 13 IP thus far, Garcia has allowed only five hits, five walks and one earned run while striking out 10. The magic of Dave Duncan strikes again, even though he usually reserves it for resurrecting aging hurler’s careers. Garcia is owned in only 10 per cent of Yahoo! leagues, so if available grab him quick in all formats and be prepared to enjoy the ride.

By Tim McLeod
This entry was posted on Sunday, April 18th, 2010 at 3:05 pm and is filed under BASEBALL, The Wire Troll, Tim McLeod. You can follow any responses to this entry through the RSS 2.0 feed. You can leave a response, or trackback from your own site.