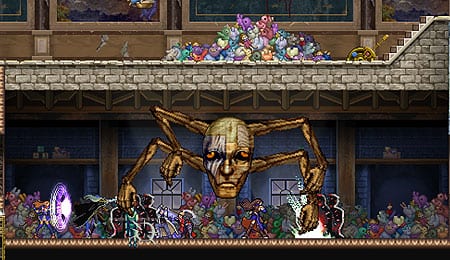 How can someone with so many teddy bears look so stoic?

Xbox Live’s Summer of Arcade rolls into its third week with Castlevania: Harmony of Despair, a title that borrows heavily from previous installments in the long-running series while adding the entirely new twist of supporting six-player co-operative play online.

All five characters have numerous moves/spells at their disposal, meaning it could take some time to become familiar with all of them. Once you do, however, you’ll be pulling off impressive-looking combos with ease. Clicking the right analog stick cycles through the game’s three zoom settings, and it can also be used to move the camera and check rooms around you.

About the only place I ran into issues was with the jumping. The control is pressure sensitive (pressing “A” hard will make you jump higher than if you tapped “A”), which has its drawbacks, but the real issue is the double jump. Hitting “A” while in the air launches a secondary jump, but there are times where you’ll land off a single jump, then try to begin another only to watch the game register that as your second jump…and send you tumbling into a pit of spikes or a waiting enemy.

The visuals in Castlevania: HoD can best be described as vintage. The game’s classic 2D sprite-based look has been polished to shine on modern televisions without sacrificing the signature charm of the series. Each of the five characters is distinct and with few exceptions it’s easy to keep track of which one is you even with a full six-player team on screen.

Boss battles are suitably intense and range from screen-filling behemoths to human-sized foes, and while the enemies are a little short on variety, they all look good. There are six diverse environments in the game, each brimming with personality and cool touches to uncover as you explore the various rooms seeking the best route to the boss.

Castlevania: HoD has a very strong soundtrack, from the melancholy tune that plays during the title screen to the powerful operatic song heard during the final battle. It fits the action perfectly and helps to maintain the game’s lasting appeal. On the downside, listening to characters call out the spell they’re performing gets old fast since in many cases you’ll be casting it dozens of times per level.

With five selectable characters imported from previous Castlevania games, just six levels and a 30-minute time limit on each, Castlevania: HoD isn’t long on original content. Instead, the game relies on its six-player co-op, vast collection of items and steep challenge to keep you coming back for more.

The early going will be unapologetically rough, particularly if you’re unfamiliar with the series. The game does a rather poor job of catering to newcomers, leaving many aspects of the game unexplained and to be discovered through trial and error or conversations with other gamers. Even now, after more than 15 hours worth of gameplay, I still haven’t figured out how to obtain additional weapon glyphs for Shanoa — or if it can even be done.

Of course, even if you’re well versed in all things Castlevania, you’ll still be poorly equipped and will struggle to take down your enemies. Fortunately, each run through a stage will supply you with items and gold to purchase better armour and weapons. Your characters never level up in the traditional sense, but they become more proficient with spells and secondary weapons, which, combined with increasingly more powerful equipment, will slowly morph you into a bad ass.

No matter how strong you become, however, playing through the game alone remains tough even on normal difficulty thanks to some tricky boss battles. This was clearly meant to be played with other people, so if you’re an anti-social gamer this may not be the title for you. The multiplayer setup, which unfortunately doesn’t allow people to join games in progress, also promotes social gaming as you’ll need to disband your existing group to add additional members.

Multiplayer is where the game really shines. I played solo and in groups ranging from two to six people, and it’s almost always more fun with more people. The game scales its enemies so that the challenge remains present. In fact, the game may scale a bit too much as I tended to do much better in groups of three and four rather than six, which is counterintuitive. Although in multiplayer at least you can revive teammates that have been killed (they become skeletons) as opposed to the instant “Game Over” you see when playing alone.

Things run smoothly, rarely even displaying a hint of lag, though some animations (such as pushing a box) look choppier online. I did encounter a couple instances where a teammate was being damaged by an enemy that wasn’t appearing on my screen, but we’re talking about two or three times in well over 10 hours of co-operative play.

It took me a while to warm up to Castlevania: Harmony of Despair. Once I did, I really enjoyed playing through it despite the game’s inherently repetitive nature. That level of repetition ensures the game won’t be embraced by everyone, but it’s a lot of fun to play once you get the hang of it — enough that is should appeal to gamers outside of Castlevania’s core fan base.