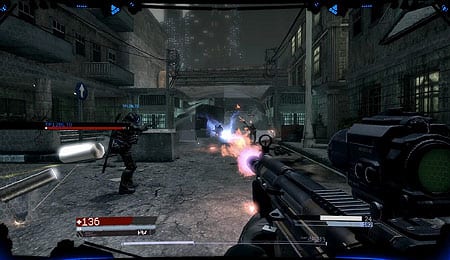 Finding a match may require the patience of Job, but at least it looks good.

Despite the continued presence of shooters atop the Xbox Live list there has been just one title — Battlefield 1943 — that really tried to tap into the market at a budget price, and even that was more about raising awareness for Battlefield: Bad Company 2 than creating a sustainable game. That’s where Blacklight: Tango Down looks to make its mark, offering an inexpensive, fully-featured online multiplayer without the campaign mode that so many gamers bypass anyway.

Things handle almost identically to Call of Duty, though aiming doesn’t seem quite as precise. Adjusting the look sensitivity helps, but it still feels a bit loose. One unique feature at your disposal is the Hyper Reality Visor (HRV). Activated by pressing up on the d-pad, the HRV allows you to see through walls and pinpoint enemy positions for a limited time. It’s an important part of being successful given the layout of the levels and is your best defense against spawn camping.

You switch/pick up weapons with the (Y) button, but the game doesn’t allow you to replace your pistol with the gun of a fallen enemy. Instead you can only switch out your primary. It’s a strange design choice and definitely serves to pigeonhole the classes — whereas Modern Warfare 2 gave snipers the option of packing a shotgun for when quarters got close, you’ve got no such alternative here.

Developer Ignition Entertainment threw out the phrase “AAA-quality” when describing Blacklight: Tango Down and the area where it most resembles its higher-priced competitors is with its strong visuals. The game’s 12 maps give off a distinctly Blade Runner type of vibe with futuristic elements clashing with a gritty urban setting that’s anything but sterile. The character models are detailed and the many unlockable gun and armour accessories all look good.

What some may find distracting is the HUD. The entire screen is bordered in black with either blue or red accents (depending of which team you’re on), and there is what I can best describe as almost a faint honeycomb pattern on the left and right peripherals. Add to that three bars on the lower left (health, sprint, HRV), two on the right (current clip, remaining ammo) and one on the bottom (experience) and it becomes an overly crowded affair.

The weapons all give off a satisfying sound and the music fits the setting. I’m not a fan of what voice work can be found in the Black Ops section of the game, however, and the explosions seem a little on the muted side.

With the exception of a few paragraphs of text located under the “Help & Options” tab, there is no story to be found in Blacklight: Tango Down. In multiplayer you’re either part of The Order (red) or Blacklight (blue), but outside of faction-specific armour and subtle changes to your HUD, there’s no difference.

The game comes packed with a dozen maps, seven adversarial modes and cooperative Black Ops, which covers four missions and is as close to a campaign as you’ll get. The missions are fine for the most part, but are hurt by a complete lack of context, leaving you to ask questions like, “Who are these people charging at me with primitive weapons?” They’re meant to be played through as a group, but can be tackled solo as long as you’re willing to be smart, patient and stick to cover. If your partner is killed he’ll respawn at the next checkpoint, though if everyone is killed any progress made is lost. On the plus side, you do earn experience in Black Ops.

As noted you will go head-to-head with others across 12 maps. This may sound like a lot, especially at the price point, but you’ll find that they all tend to follow a pretty standard setup and none of them feel decidedly different from another. The modes are also standard fare, leaving the entire thing with a “been there, done that” vibe. Sure, there are a few distinctive twists — the HRV, Digi grenades that create a bubble of pixels, an EMP grenade that causes your HUD to do a full reboot — but nothing that allows it to step out of the shadow of the games it’s competing with.

The matches themselves can be fun once you get the hang of just how quickly you’re going to die. It’s actually a refreshing change from the beefed up bullet sponges you see elsewhere, and it adds an element of anxiety. The lack of perks, grenade launchers and killstreaks makes it more about steady aim and reflexes…or at least it should. Unfortunately, many maps are designed to almost promote camping, which can kill the fun, especially when the teams get unbalanced. Yes, there are ways you can get out of it, but a game shouldn’t make it such an appealing and viable strategy.

As big of a problem as camping is, it pales in comparison to the matchmaking. Unlike most games, Blacklight: Tango Down does not allow players to join an ongoing match. That decision has a two-fold effect on the gamer. First, those in the game can be left facing overwhelming odds when a 6-on-6 match suddenly becomes 5-on-2. Second, those looking to join a game can sit and stare at the “Match Found” screen for minutes on end. And then sometimes you’ll still wind up in an empty lobby or immediately lose your connection to the host. It’s incredibly frustrating.

Few games have been harder for me to render a verdict on than Blacklight: Tango Down. On the one hand it looks good, is generally fun to play and costs the same (1,200 points – US$15) as a map pack for Modern Warfare 2. On the other, the wait times can be excruciating, quitting is rampant and camping is seemingly encouraged by the map design. Ultimately, the pros outweigh the cons for me, but I do feel some additional polish would’ve really helped.

By Herija Green
This entry was posted on Saturday, July 31st, 2010 at 2:54 pm and is filed under Herija Green, Video Game Reviews. You can follow any responses to this entry through the RSS 2.0 feed. Responses are currently closed, but you can trackback from your own site.