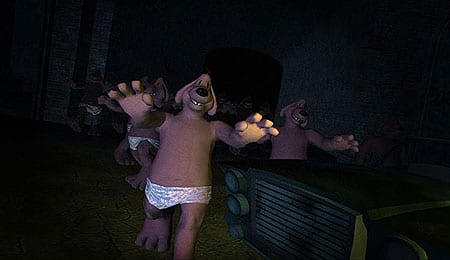 Beware the half-naked zombie dog — he’ll steal your chocolate and your toys!

Imagine being trapped in an old diner, surrounded by zombie hands breaking through the doors. In between gunshot blasts out the windows, a family squabble is adding to the drama, and at the centre of it all is the reliable gumshoe, trying to think his way out of yet another awful situation.

Now picture those zombies as fudgesicle-loving dogs, the blasts coming from the gun of Max, a hyperactive rabbit, and the gumshoe at the centre of it all is Sam, a wisecracking dog in a trenchcoat. That’s the opening of Sam & Max: The Devil’s Playhouse, Episode 4 — Beyond The Valley Of The Dolls (you got that all?); welcome to the world of Sam & Max, Freelance Police. They’re adventure game icons, comic book heroes, and even had their own TV cartoon. But while the dialog and characters live up to the Sam & Max name, the rest of the episode’s design seems ill-conceived and frustrating. It’s an adventure game, but you’ll find a startlingly lack of actual adventure for much of the experience.

For the Sam & Max games, Tell Tale Games uses a similar engine to Tales Of Monkey Island. The analog stick moves Sam around, the trigger buttons cycle through usable objects on the screen, and the face buttons activate interaction, either directly or with inventory. However, when you activate Max’s Toys of Power, things get changed up a little bit. Going into Max mode gives you access to the Toys of Power from a first-person (Max’s) perspective. A target pops up and lets you aim your Toys of Power, though they have limited functionality depending on the situation.

Dialog is obviously important in any adventure game, and Tell Tale keeps it simple with a dialog wheel that lets you select the topic of conversation. When a topic has been exhausted, it’ll gray out, so you know you can keep pushing an issue even when you’re not getting a good response. This is also a good way to make sure you experience all of the jokes in the game.

When it comes to movement, you simply tell Sam where to go with the analog stick. The problem, as with most Tell Tale releases, is that the collision detection and walking areas aren’t that precise, so you’ll find Sam caught on corners or objects. Since this is an adventure game, controls don’t require the precision you get with shooters or sports games, but it’s still annoying. Don’t even bother trying to look at the exact object you want in the environment; instead, walk to the general area and cycle through the usable objects. It’s a much simpler way to get the game to do what you want.

The Sam & Max series is available on all three major platforms, which means that the only real graphical improvement on the XBox and PS3 is resolution, not polygon count. The models are clearly last-gen, but they’re appropriate for the cartoon world that the Freelance Police live in. However, this episode primarily takes place in a series of dark rooms (more on that later), so there’s not a lot to look at. Tell Tale was probably trying to get a sense of atmosphere with the artwork, but the result is more claustrophobic than surreal, and that can be a detriment when the game doesn’t really take you to many places until the end.

Fortunately, the voice acting more than makes up for this. Sam is a semi-serious gumshoe dog while Max is a psychotic rabbit, and their performances are given with gusto. I played the original Sam & Max Hit The Road back on PC in the 1990s, and even though the voice actors are different, the delivery is similar, so that consistency is nice. Outside of the main characters, the supporting cast is strong and everyone gets into the over-the-top mood appropriately.

Okay, here’s the kicker: adventure games are supposed to be about adventure. In most games of this genre, each room or area that you’re in may only have one or two things/characters to interact with, but the spaces still exist to help bring the world to life. This has been true from the first King’s Quest to The Longest Journey to the current genre revival. So when you’re spending a large chunk of the game limited to a handful of rooms or areas, it doesn’t really matter if the items change or the NPC characters have different things to say; it still drags down the experience because of the lack of exploration.

If this episode wasn’t part of a series and if the writing wasn’t so witty, I probably would have put the game down after an hour. Yes, the environments are goofy and surreal, but they’re just not that fun or interesting. The personalities of Sam and Max carry the game forward, and you’ll find plenty of useless objects that spark several witty comments between the two. If you’re a Star Trek fan, you’ll especially appreciate the Heisenberg Compensator reference.

The unique thing about this Sam & Max series is Max’s Toys of Power. Each toy offers a different power, some of which are more logistical (the toy phone transports between rooms) while some of them are purely for problem solving. Max also can use mind-reading cards and a future-vision, both of which offer some hints about what to do. In some cases, though, this feels like cheating. How do you know what specific thing to say in an interrogation? Sometimes, your only option is for Max to read the character’s mind, and then you magically know what to say. There’s no trickery or sly maneuvering to discover that; it’s just planted there. Casual gamers may appreciate this simplified approach, but longtime adventure fans will feel like this is the easy way out.

However, the Toys of Power come with enough wackiness so that even when they don’t help solve a puzzle, they’ll bring plenty of laughs. And really, that’s what saves Beyond The Alley Of The Dolls in the end. The questionable structure and puzzle design are overcome by the strong and engaging personalities of the lead pair, along with the goofy absurdity that comes with an army of half-naked zombie dogs searching for toys.

Tell Tale Games should be commended for helping to revive the adventure game genre. However, Episode 4 of The Devil’s Playhouse can be uninspired and frustrating at times, and probably won’t win over converts like some of its other efforts. Still, if you’ve love the surreal world of Sam and Max, along with their razor-sharp humour, you’ll eventually forgive the technical difficulties and enjoy the ride.

By Mike Chen
This entry was posted on Thursday, July 29th, 2010 at 11:38 am and is filed under Mike Chen, Video Game Reviews. You can follow any responses to this entry through the RSS 2.0 feed. You can skip to the end and leave a response. Pinging is currently not allowed.