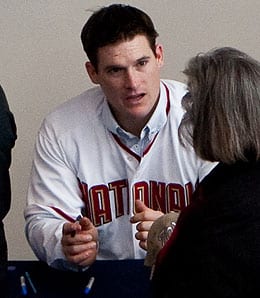 Josh Willingham is having a nice season, but how much value is he going to provide in a ten-team mixed format?

Two owners in my league are actually active again. I’m wondering what, if any, trade offers you would suggest for me, or if I would be better off working from the wire.

Here is my team’s current roster:

Team One (who has a roster spot open):

One of the biggest problems faced when looking at shallow leagues is trading. The strong starting rosters of all clubs makes trading a very difficult process and in your particular case the “inactive players” in your league further compounds the problem. I believe your best bet is to look to the waiver wire for your options.

Are Willingham and Sanchez really going to provide value in your format down the stretch when there are players like A-Ram currently tearing the cover off the ball sitting on waivers? Do you need four closers when there are still options available for saves on your waiver wire?

Looking at your team, my suggestion would be to work the wire and move forward looking at rostering the current “hot hand.” You also have to consider that you have both Pedroia and Gallardo on your DL and will need roster slots available for when they return (in the case of Gallardo, he’s coming off the DL and moving back into the rotation Thursday).

For the short term, Ramirez is hotter then fire. Torres has been getting the job done very successfully for the Giants. From a pitching perspective, Dice-K has been pitching exceptionally well and in his last two starts has looked like his old self. Bumgarner has looked very much like the pitcher that has been touted by many since little league.

The problem is not the availability of talent, but the ability to get the right players active at the right time and racking up those statistics. Two weeks ago, people were writing off A-Ram as being done – this week he’s a Fantasy God. My suggestion is when a player looks to be trending in a positive light, go get him and ride the streak for all it’s worth and be prepared to rinse, wash, and repeat as the need arises.

The key is spotting those trends early enough to be able to add players that can provide help. It takes a lot of work and time and is also a roll of the dice, but in a format with as many options on the wire as your league offers, it is the best approach when attempting to move up the standings. I hope this helps and good luck playing the waiver wire game.

By Tim McLeod
This entry was posted on Wednesday, July 21st, 2010 at 2:46 pm and is filed under BASEBALL, Dear RotoRob, Tim McLeod. You can follow any responses to this entry through the RSS 2.0 feed. You can leave a response, or trackback from your own site.