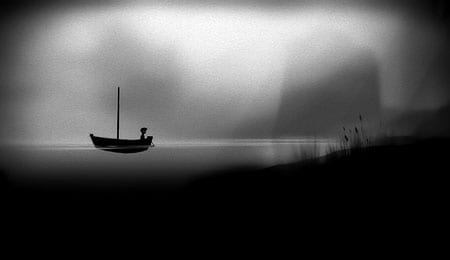 The black and white world of Limbo is eye catching to say the least.

Every so often a game comes along that garners attention from anyone that looks at it, gamer and non-gamer alike. Limbo, the title chosen to kick off Xbox Live’s Summer of Arcade, does exactly that with a stunningly simplistic yet unforgettable visual style. Developer PlayDead pushes all the right buttons with its debut effort, creating an experience that will stay with you long after the credits roll.

The controls couldn’t be any simpler as the only moves at your disposal are jumping (A) and interacting with objects (B).

There are pretty much two ways for a game to earn acclaim visually: (a) have stunningly detailed graphics (i.e., God of War III) or; (b) be completely unique and artistic (i.e., Okami). Limbo exemplifies Option B by making use of an entirely black and white palette to create a work of art.

It’s an all-consuming experience as you cannot help but be drawn into this bizarre netherworld where the absence of colour makes every sensation (dread, wonder, elation) feel heightened. You almost feel compelled to step out into the sun when you’re done playing just to reintroduce yourself to the world of colour and warmth. That may sound like hyperbole, but the grayness of Limbo’s world lends an almost tangible weight to playing the game. It’s absolutely brilliant.

The fluidity of movement from all the game’s creatures is also excellent, and you’ll be seeing your character die a plethora of terrible deaths. In nearly all games, violence against children is taboo, which makes seeing the young boy you control decapitated by a bear trap or impaled by a massive spider all the more unsettling.

Developer PlayDead deserves no end of credit for its work on the game’s audio as well. It would’ve been cliché to include a melancholy score, and instead Limbo employs a less-is-more approach by having the vast majority of the game be completely devoid of music, leaving only the sounds of your own footsteps. Every cracking tree branch or ripple of water is perfectly understated and further drenches the game in its wholly unique ambiance.

A 2D puzzle game with platforming elements, Limbo begins with you — a black silhouette adorned only with a pair of white eyes — awakening on the ground without any semblance of an explanation as to how you arrived. In fact, the only information you’re privy to throughout the entirety of your adventure is that you’re searching for your sister.

The game gives you some time to acclimate to your surroundings early on, but it isn’t long before you start encountering the world’s inhabitants. Giant spiders, mind-altering worms and what appears to be a tribe of hostile children punctuate the early portions of Limbo and set the tone for what the developer accurately described as a “trial by death” experience.

Limbo is shockingly gruesome with the frequency, suddenness and unapologetic violence with which you’ll meet your untimely end. It serves to heighten your anxiety throughout the game as you’re taught with great regularity that your next death could be mere moments away at any time. That overarching sense of foreboding helps maintain tension in moments that would normally be considered down times.

It’s more than just graphics and mood that make this game special, however, as its true genius can be found in the devilishly clever puzzles that permeate the world. Some are brain teasers that require you to think outside the box while others demand a steady hand and perfectly-timed platforming to solve. There’s a tremendous amount of variety here, and perhaps even more impressive than the diversity is the game’s refusal to rely on gimmicks (a la Braid or The Misadventures of Mr. P.B. Winterbottom).

If there’s an area of concern it’s Limbo’s relatively short length. Even struggling mightily with some of the puzzles, I was able to complete the game in about six hours, which could easily be more than halved once you know the solutions. That more or less puts gamers on the honour system, and let me say that anyone that routinely seeks out the answers online is undermining the game’s value tremendously. Having the light bulb come on after working on a puzzle for half an hour is a great feeling, and if you take that out of the equation all that’s left is ambiance and platforming.

Limbo immerses you in a hauntingly beautiful world, effortlessly balancing its one-of-a-kind look, minimalistic audio and stellar gameplay into one memorable package. Despite its brevity, Limbo is sure to garner consideration when it comes time to crown 2010’s Game of the Year.